Subscribe Now Get The Financial Brand's FREE Email Newsletter
The Ascent, Motley Fool's personal finance comparison site, serves consumers who want to shop around rather than just choosing one more relationship with their regular bank or credit union. Understanding how it operates is crucial to having a successful relationship with such sites.

Americans do more and more of their shopping for financial services from mortgages to cryptocurrency accounts via Google. And when they do so, the odds are much stronger that the leading items in their search results will not be pages on bank or credit union websites, but rankings, reviews and articles on third-party sites, sometimes called comparison sites or affiliate sites.

Research by Terakeet found that these sites have a better sense of how to rank higher in Google searches than most financial brands do. These sites typically come far ahead of banking sites.

Reach Consumers Where They Go:

Content may be king, but if Google doesn’t love you (or even know you), your ‘kingdom’ will be a small one.

To learn more about this channel we explored The Ascent, part of The Motley Fool family of sites.

Motley Fool is known chiefly for its research and recommendations dealing with investments. Nathan Hamilton, Director and Co-Founder of The Ascent, explains that the team running the parent site realized that before consumers could reasonably invest successfully they needed a basic understanding of such things as credit scores and how to improve them, budgeting, reducing rates on mortgages, and building an emergency savings fund. The Ascent began as Motley Fool’s version of an independent source for product financial product reviews and rankings, along with advice.

Hamilton explains that the team had an epiphany: “I don’t know on average how many stocks people buy annually, but they probably make five to seven financial decisions daily.”

The target audience for the site varies according to the product area. Hamilton says deposit product coverage tends to draw older consumers with more disposable income and often more education. But in consumer credit areas, the audience tends to be younger people who want to borrow or improve their credit before seeking loans.

If there’s a way to use one’s money, chances are The Ascent is covering it in some fashion. However, there are times that the site will decline to cover a product category — it may be considered too “predatory,” in Hamilton’s word, or expensive — or simply eclipsed by better choices. In some cases staff will deem it too early to cover a provider or a type of service, preferring to wait a bit for a track record to be established.

“Overall, the great thing about personal finance is that there are so many good products out there,” says Hamilton. “The bad thing is that it’s hard at times to find which ones are right for you. It can lead to paralysis by analysis. We come into play to hopefully cut through the noise a little bit and help people narrow the options they are looking at. Everybody has a different financial scenario and what’s right for one person may not be right for another.”

One important point about The Ascent is that simply being cool doesn’t get you far. An article about Dogecoin, for example, cast a balanced but definitely cautionary light on the cryptocurrency. And neobanks are examined carefully.

“Chime overall is a great product, has a high yield, great customer experience. But for every Chime, there are three or four other neobanking products that aren’t as good.”

Hamilton demonstrates a skeptic’s eye. He notes that many neobanks raise their savings account rates during their venture capital and fundraising periods.

“They want to be able to put it into their pitch deck that their user base is growing,” says Hamilton. “But wait a year or two down the road and those rates get cut in half — or more.” 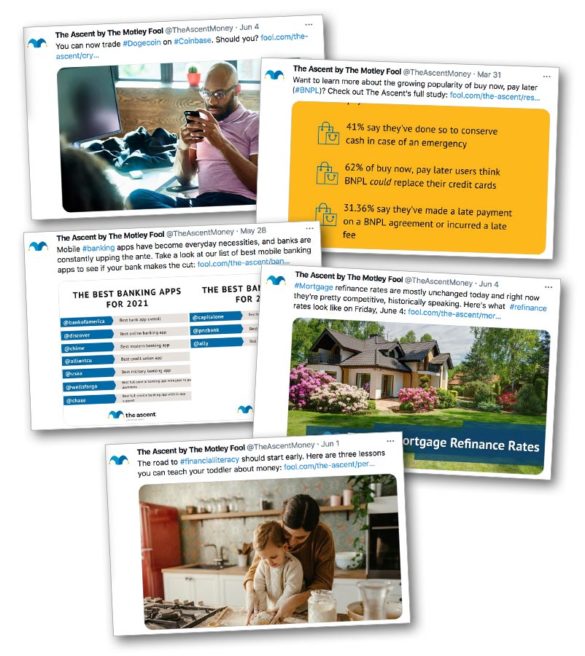 Such practices will work against a provider. “We put an extra level of scrutiny on those products because there are risks with them. We want to make sure they are good long-term products for people,” says Hamilton. “We’d rather go with a provider that’s more consistent and more competitive with the market over time.”

When consumers are comparison shopping for financial services, they typically consult multiple sites, not just a single one. They will more likely choose a particular provider if say, three out of four sites recommend it.

Another sort of comparison site user wants to make informed choices, says Hamilton, but is only willing to devote 30 minutes or so to a decision. They’ll consult one site they trust, go with the top pick, and call it a day.

How The Ascent’s Financial Model Works

Access to comparison sites most typically is free to the public. Hamilton says the only site that’s really made a go of the paywall approach is that offered by Consumer Reports, run by the nonprofit Consumers Union.

For the rest, some degree of support from banks, credit unions and other financial providers is necessary. Each site balances the need to make a profit with the need for editorial integrity. Hamilton points to his site’s statement on this matter, which says in part: “We’re firm believers in the Golden Rule, which is why editorial opinions are ours alone and have not been previously reviewed, approved, or endorsed by included advertisers. The Ascent does not cover all offers on the market….”

“If you look at our site, you’ll see that we frequently recommend products that we don’t get paid for, because it’s the correct way to do business.”

Hamilton adds that this practice was maintained through the early business downturn due to the pandemic. He adds that even when many financial providers who normally use affiliate marketing temporarily pulled back, The Ascent continued to rank those brands highly when product quality dictated it.

Hamilton explains that a strong separation of editorial and promotional staff is maintained. The editorial side will know that a brand is paying for exposure, but has no knowledge of the details, for example.

Generally business development staff from the brands and The Ascent deal with each other and editorial staff work with financial institution communications staff when contact is necessary. Hamilton explains that paid relationships generally require input from compliance teams on both sides, especially when the site is receiving compensation for products like credit cards that are chock-full of regulatory requirements. It can take years to establish a paying affiliate relationship with a credit card provider, according to Hamilton.

And then, he says, it can take some time for a commercial relationship to be structured to the satisfaction of compliance staffs.

“They run them through the wringer,” he explains.

“Editorially, we don’t interface too much with partners, in order to keep that wall between business payouts and editorial,” says Hamilton.

Let’s Say Your Brand Has an Exciting New Product…

Institutions both large and small regularly come up with fresh ideas for products or services. Naturally, they want coverage, and a comparison site would make a good place for a debut.

Don’t expect Hamilton’s team to necessarily jump on the new idea with an immediate in-depth review. The Ascent is not meant to be a news site in the usual sense. Hamilton says if a development is new enough to warrant a quick word to readers, a staff writer will knock out a quick update item.

“But we would not rush out a deeper review of that product because we want to make sure that we have a deep understanding of all the details and how it compares to the other options available on the market,” explains Hamilton. In-depth treatments wait for the product being run through the site’s ratings model, for example.

Read More: The Digital Ads Banking Consumers Hate Most (And Why)

One faux pas that banking companies and other providers make when dealing with The Ascent is getting pushy about edits to comments made about their brand or product.

“It could be that we have put together an article and they don’t have the greatest rating, and the team at that institution would like to have a more favorable review,” says Hamilton. “So they reach out to see about potentially getting better reviews. For us, of course, that’s a non-negotiable.”

Hamilton adds that correcting a factual inaccuracy would absolutely be done, “but when it gets into the realm of editorial and opinions, it’s just not something we’ll waver on.”