First Direct, the UK internet/telephone bank and subsidiary of HSBC, is leveraging its positive word of mouth reputation with a new microsite, First Direct Live, that highlights people’s sentiments about the bank — both good and bad. The Marketing Communications Manager for First Direct, Natalie Cowen, says the microsite is “a very open and transparent way of projecting the voice of our customers.”

The microsite gathers mentions of the First Direct brand from social media feeds, blogs and message boards, and displays them for all to see. Visitors can also post their comments directly on the site in the Talking Point area. There is no one else in the industry that is facilitating public conversation about their brand in such an honest and open manner. It is clear that First Direct is embracing the principles of social media and word of mouth marketing, and their forward-thinking approach to communication should do well to differentiate them from the masses.

Various modules at the First Direct microsite stream comments, feelings and words about the brand.

First Direct understand that their new business comes largely from customer referrals, and that referrals are more believable when people hear both positive and negative testimonials. In addition to posting them on the microsite, the bank will be taking a selection of people’s comments and using them in a print, digital out of home and online campaign. 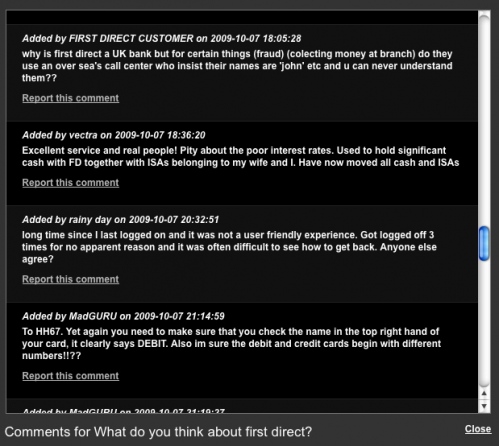 People’s feedback on First Direct includes both the positive and the negative.

First Direct should be admired its courage, allowing the site to be a real-time aggregate source of positive- and negative public feedback. It would be daring of any company to do this, but it’s especially so for a bank because the entire financial industry has received so much criticism lately.

The First Direct brand is known for its exemplary customer service and for having a vocal fan base. This microsite is indicative of how much the bank trusts its customers to spread positive word of mouth.

How many financial institutions can say that?