Dexia Bank, serving France and the Netherlands, has done two of the most innovative things you may ever see in financial services marketing. First, they have targeted a Gen-Y audience with live rock concerts streamed in the bank’s banner ads (more on that in a moment). Second, they’ve set up a whole separate bank, Axion, to exclusively serve customers ages 12-25. 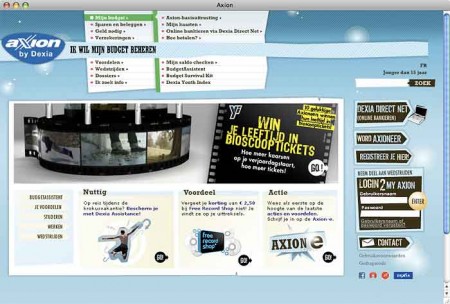 This idea of a bank-within-a-bank is not entirely unique. For instance, Bank of the Wichitas created Redneck Bank, an online/direct spinoff targeting Midwest mullet lovers. But Redneck is merely a reskinned bank with a lifestyle veneer. What Axion is doing is quite different: unique products, promotions and educational resources exclusively targeted to a narrow audience segment and marketed under a separate standalone bank brand.

By 2020, the retail financial landscape could be littered with hundreds — if not thousands — of these micro-niche banks. A big bank that may be struggling to serve everyone today could be completely transformed into a collection of sucecssful sub-brands 10-20 years from now. Instead of one corporate website, think “many different websites,” all with different styles and different products.

To promote Axion back in 2009, Dexia created one of the most innovative promotions of the year — in any industry. Axion introduced what it believes is an internet-first: “Axion Banner Concerts.” The bank streamed rock concerts — real live-gigs — within the frames of traditional banner ads. There’s no easier way to explain it. You just have to see it.

First, Axion started with a contest to select 25 young, up-and-coming bands. Then they invited each of these bands to perform live on a specially-constructed sound stage. The filmed concert was broadcast live, and streamed onto popular Gen-Y websites in a complex media plan. Axion provided an “embed” option so bands could easily incorporate performances into their websites, fan blogs and social network pages.

BAND PLAYS CONCERT IN LEADERBOARD SIZE BANNER AD
Click on the ad to play the concert and see how it works or view the performance on YouTube. 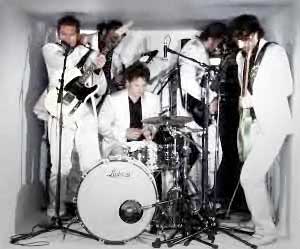 TIM VAN HAMEL – “GARDEN OF WEEDS”
Click on the ad to play the concert or watch it on YouTube.

Clicking on one of the banner ads would drive visitors to the Banner Concert microsite, where the public could vote for their favorite among the 25 bands. The winner got to perform a live gig at Ancienne Belgique, one of Belgium’s biggest concert halls, with live streaming on an Axion Web-TV channel.

Axion supported the Banner Concert series with a mix of media, including emails, an ad on MTV, and by spreading posters in music stores, CD shops, bars and restaurants. The Banner Concert campaign was developed by agency Boondoggle.

The campaign’s results are impressive:

The campaign won several awards, including 5 Golden Lions in Cannes. For the Banner Concert project’s innovative use of online technologies, its creativity, imagination and the bank’s utter commitment to a Gen-Y audience, The Financial Brand is also bestowing one of its Breakthrough Brand Awards to Axion. Great work and congratulations! 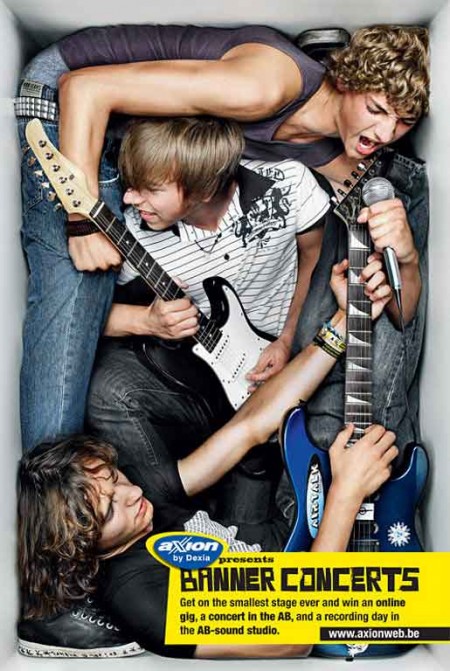 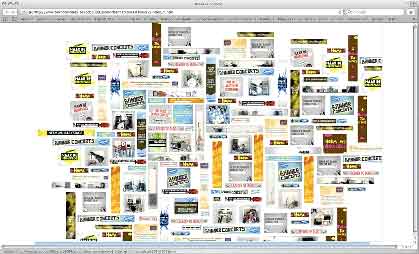 CAMPAIGN MICROSITE
Each banner ad led to a microsite showcasing a collage of all 25 bands’ performances. There the public could vote for their favorite show. There’s a little navigation strip at the bottom of the site with links to Axion, but the Axion brand should probably be more prominent. You might not ever know this was a promo hosted by a bank. 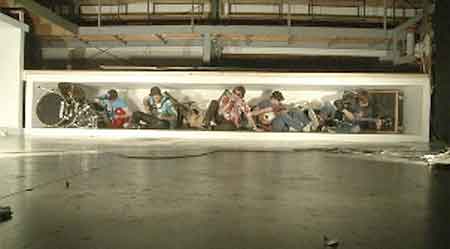 Bands play their concerts on a stage that was exactly the same proportions as traditional online banner ads. The idea to have bands perform — quite literally – within the confines of a banner ad is simply brilliant. Concerts were filmed and produced by Mojuice. The sets were developed by Stakka Concepts.

( 01/19/2022 Editor’s Note: The Breakthrough Brand Award has since been removed from The Financial Brand‘s website. )