Subscribe Now Get The Financial Brand's FREE Email Newsletter
Tired of competing with institutions that can afford to promote themselves on popular affiliate bank marketing sites like Bankrate, Seattle Bank has started its own CD rate listing service, called CD Valet. All banks and credit unions will be welcome to post their rates on the website and in the app — for free.

What they’d like to find is a completely impartial listing of rates for each type of deposit. What they typically get, however, is a listing featuring the rates of all the players willing to pay for a spot. Other banks and credit unions might also appear, but the ones who pay get the limelight.

This has become such a common component of the marketing mix that it has acquired a somewhat euphemistic label: “affiliate marketing.” Less euphemistically, it’s called “pay to play.”

The disclaimers explaining this practice are easy to miss on many of these websites. One such message, which appears only to users who click on a tiny asterisk of a button, notes that the featured products are “sponsored,” which impacts how, where and in what order they appear. Others run along the lines of “does not include information about every product or service,” sometimes with notes about not being influenced by advertising.

Seattle Bank’s John Blizzard finds this frustrating, because community banks like his frequently aren’t shown on these sites, or at least not with any prominence — even when they are paying a great interest rate on their deposits.

“Potential customers don’t see you and it’s very expensive to get exposure,” says Blizzard, president and chief executive of the $751.6 million-asset bank.

Megabanks and digital banks generally dominate the listings because they can afford to, even though their rates may not be as high as those being offered by smaller institutions.

But Seattle Bank has developed a solution — which is intended to benefit consumers and community financial institutions alike.

A Believer in CDs as a Funding Source

Seattle Bank relies heavily on CD funding. It is a one-office operation that uses CD rates as the cornerstone of its growth strategy, in lieu of building branches, and CDs routinely account for about 40% of its retail deposits.

“We are built to be a high-rate payer,” Blizzard says of the 23-year-old bank.

But big banks and fintechs are able to afford high exposure on affiliate marketing sites and can outbid smaller providers to dominate Google ads — which has fueled Blizzard’s desire to find a digital marketing alternative.

The idea of Seattle Bank running its own CD rate comparison site came to Blizzard years ago, but work didn’t get underway until the likelihood of rising rates became clear. In 2021, working with the technology firm Apexon, the bank tested the concept with 50 regular depositors.

Then, in mid-November 2022, it moved on to a regional rollout with coverage of nearly 500 institutions in five western states (Arizona, California, Idaho, Oregon and Washington). The plan is to expand nationwide eventually.

The service, called CD Valet, is both a website and mobile app, and it is free to consumers and financial institutions. CD rates appear in size order, from the highest interest rate down, for all providers.

In fact, there is no way to pay to influence placement and exposure, because Seattle Bank runs the site and won’t take any money for the listings.

The bank’s own CDs may not be near the top of a given category in a particular week, but Blizzard is fine with that. 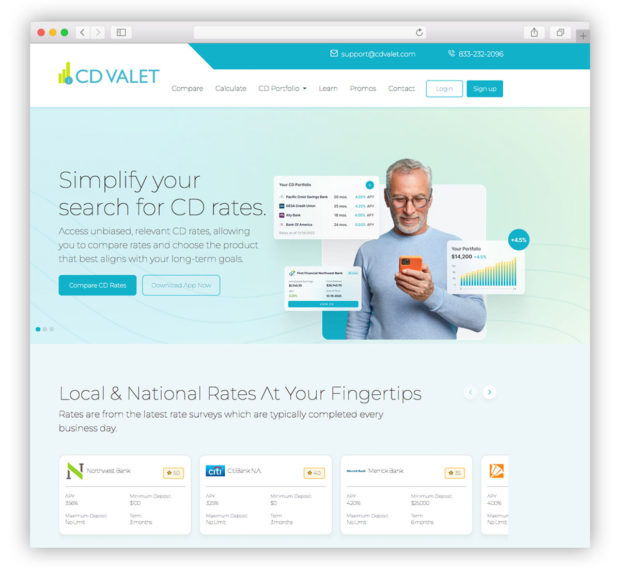 As Blizzard explains it, CD savers are a different breed of customer than the typical depositor. Their deposits have long been known as “hot money” among bankers, since they tend to go wherever the highest rates are.

Blizzard notes that they are diligent researchers, combing all the sources they can to find the best deals for big chunks of money. So Seattle Bank has long matched all of that research on behalf of its asset-liability management committee, to ensure that it is remaining competitive, week after week.

To feed the website and app, the bank devised a methodology that combines human and technology inputs.

In general, “banks haven’t paid a lot of attention to CD customers in recent years,” says Blizzard. Rates were so low for so long that CD marketing fell out of favor among all but specialists like his bank.

Some analysts have joked that younger consumers know no more about CDs as a savings vehicle than they do about CDs as a way of playing music. But the rapid rise in deposit interest rates has fueled a sharp increase in awareness.

“Just from a liquidity standpoint, CD Valet makes a ton of sense for us,” says Blizzard. He expects the service to expand the bank’s reach to thousands of additional potential depositors, at a time when deposits will be far more of a challenge to raise than they have been for many years.

But beyond that, he’s also pleased about providing a useful service to consumers.

“CD investors are savvy savers, especially in today’s economic environment, and they deserve a comprehensive and unbiased view of the marketplace,” says Blizzard. He thinks many will welcome the ability to easily locate good CD rates closer to home, where their deposits are more likely to fund local lending and investment.

Read More: What the Apple Card High-Yield Savings Account is Really About

The Target Market for CD Valet

Though CD Valet is live, Seattle Bank is still finalizing plans to promote it to consumers in the initial five states.

But Blizzard says he hopes that the service will appeal to two consumer categories in particular.

The first is what he calls “serious savers,” people with a significant amount of savings and a history of moving it around to get the best returns. Those are the savers the bank has been serving for a long time.

CD Valet offers search filters and tools meant to appeal to these users, including a tool to set up CD “ladders” for capitalizing on rates while maximizing liquidity.

“Those are people who have money at a big bank who have been there for years, earning nothing,” he explains. “We hope to pull some of them off the sidelines. We have to help sleepy savers wake up.”