Everyone in the financial industry knows: It’s not easy to get people to switch banks, even those who hate their current bank. This is true in Australia where 49% of consumers say they would be more likely to switch banks if it was easier. But most folks can’t stand the mountain of paperwork and headaches involved. So in July 2012, the Australian government decided to change the rules and made changing banks a simple one-form process — colloquially called “tick and flick” switching.

For Heritage Bank, it was game on. They knew the nations big four banks had thousands of unhappy customers who were ready to dump them. Heritage swooped in with a brilliant and perfectly-timed campaign aimed at the big banks’ least satisfied customers.

For a 24-hour period, Heritage ran a live, interactive “takeover” banner ad on couriermail.com.au. When a visitor clicked on the banner, they were prompted to enter their name, suburb and answer this question: “Do you love your big bank?” Their answer choices were “yes,” “no” and “when pigs fly.”

Once the information was supplied, they were routed to a live broadcast studio and introduced to “Heritage Man,” the on-going star of Heritage’s TV commercials. Behind him were three targets on a wall with the answer choices: Yes, No and When Pigs Fly. Heritage Man would greet them by name, engage in some light-hearted banter, then hurl a tomato at the appropriate target.

The overwhelmingly majority of consumers chose the option “When Pigs Fly,” but when the occasional visitor did vote “Yes,” Heritage Man accepted let them know that the bank would always there if they ever changed their mind.

Heritage Bank ran hourly competitions using the #bankrage hashtag, and asked people to nominate what they wanted thrown (besides tomatoes) at targets.

Skip to the 1:35 mark of this video to watch Heritage Man chucking tomatoes around a live TV studio as he interacts with angry bank customers. 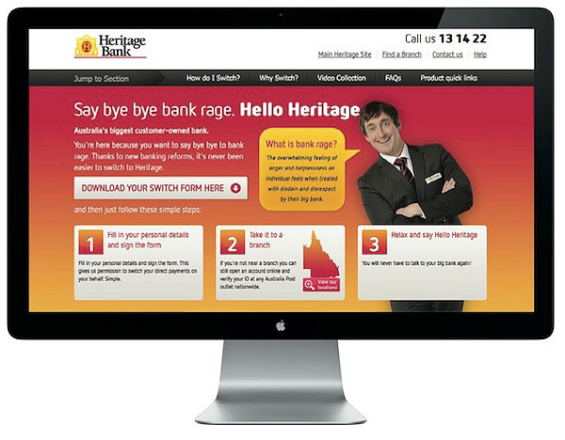 For the Heritage campaign, BCM transformed two bus shelters in Brisbane into mini, interactive bank branches. The ads were located by the headquarters of competitors BOQ, Westpac, Suncorp and HSBC (what’s known as “ambush positioning”) and include a message on the roof targeted at rival bank executives. The bus shelters also featured interactive screens where people could vote on whether they loved their big bank or not. Over 6,000 people cast their votes. 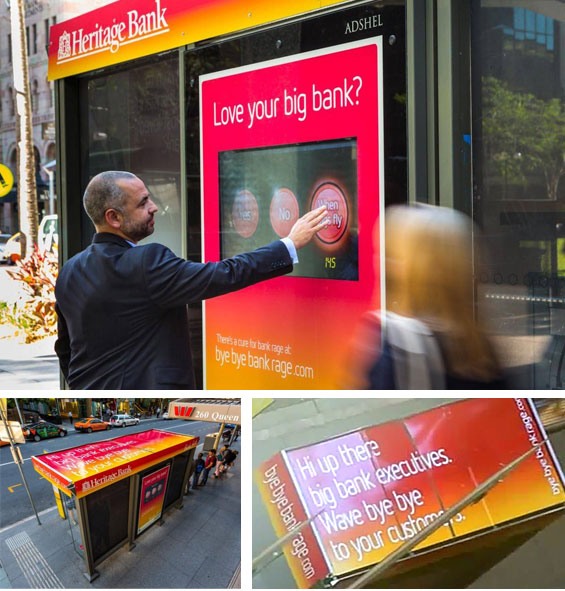 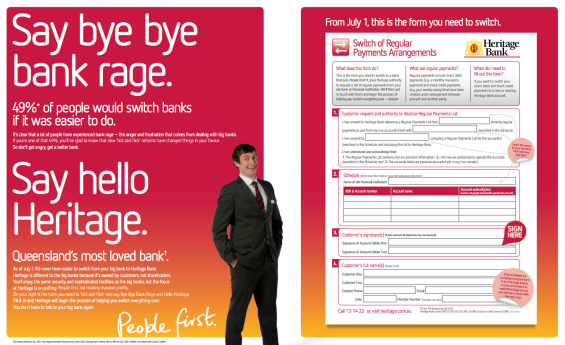