ATB Financial has launched a new corporate giving initiative centered around an innovative online charity portal. ATBCares.com is the bank’s own proprietary destination website where people can purchase charitable gift cards that allow recipients to choose where their donation goes.

The problem with most charitable gift cards is that the “donation on your behalf” usually goes to a cause important to the giver, not the receiver. But with ATBcares.com, it’s up to the recipient to choose which charity they want to support from among a list of 84,000 different organizations. The recipient of the gift card finds a cause important to them, then makes their donation by redeeming their gift card. Now that’s the right way to do it.

Buyers of ATB gift cards can choose from 10 different stock designs, or they can upload their own custom image — no charge.

The entire gift card process is very straightforward, and you don’t need to be an ATB customer to make it work. Everyone in the U.S. or Canada can purchase ATB charity gift cards, and then give them to anyone who has an email address anywhere in the world.

Buyers can purchase gift cards using either their Visa and Mastercard. The Financial Brand was not able to determine whether ATB has integrated its online banking platform with the ATB Cares service.

Once the gift card is purchased, the buyer gets an instant receipt for their tax records, while at the same time, ATB automatically emails the gift card off to the recipient.

Websites like ATB Cares signal a new era in corporate giving — one where the public controls how donations are allocated, not a handful of corporate officers behind closed doors. Many financial institutions now crowdsource input on which charitable causes they should support. Chase has been running its Community Giving contest on Facebook since 2009. And AmEx has its Members Project. But what makes ATB’s initiative unique is how it works: gift card buyers give up potentially valuable MCIF data, while gift card recipients are exposed to the ATB brand. You could almost think of this as a refer-a-friend program.

Key Question: Will those buying gift cards who aren’t already ATB customers receive marketing messages encouraging them to switch? Is there any reason ATB shouldn’t do this? 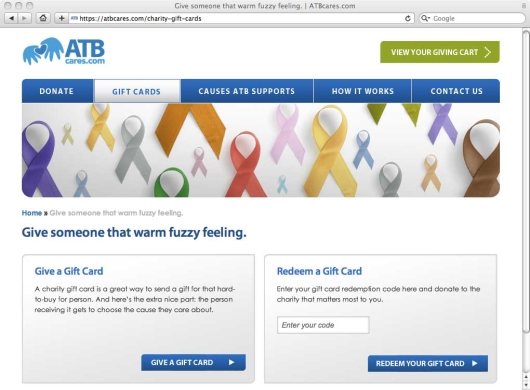 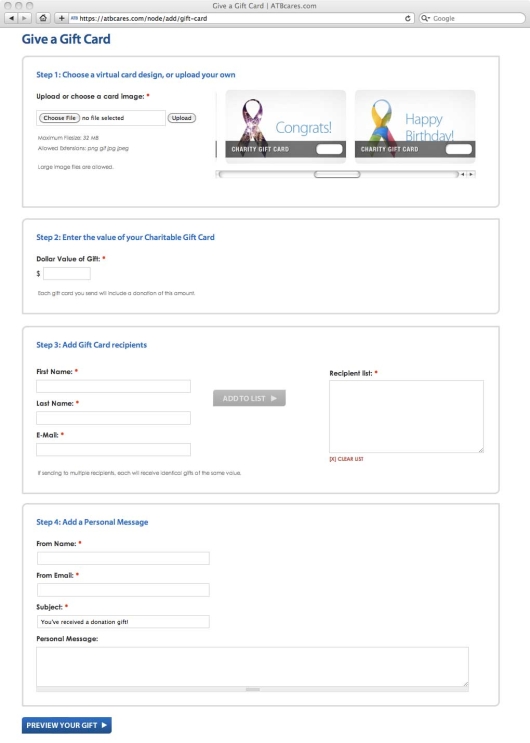 “ATB wants to move toward a mode of corporate philanthropy that involves their clients and community at large in citizen philanthropy,” explained Bryan de Lottinville, President and Chief Executive Officer.
.
Indeed ATB is no slouch when it comes to corporate giving. Last year, ATB contributed almost 19,000 volunteer staff hours, $4.9 million in sponsorships, $1.19 million in donations, and $1.1 million in corporate fundraising for Alberta causes.

Banks have always been big on corporate philanthropy, but after the financial crisis in 2008, they found themselves subject to scrutiny, with greater expectations to give back and be socially responsible.

“Banks have an amazing opportunity to make a unique social impact based on sheer numbers and trust,” de Lottinville said.

“The challenge is, it’s hard for financial institutions to give back in ways that truly involve their clients and communities,” de Lottinville continued. “But most banks don’t get too far beyond charities like the United Way and the Red Cross.”

If someone just wants to make a straight donation, they don’t have to buy a gift card. They can simply visit the ATB Cares website, pick their charity and hit the “checkout” button.

All online donations are collected by ATB, then transmitted from ATB to the Canadian Online Giving Foundation who distributes funds to over 84,000 registered charities. The COGF, itself a registered charity, serves as escrow ensuring every penny a contributor donates makes it to the causes they selected. If there are any administrative fees associated with a donation, ATB promises to pick up the bill.

ATB says it will match 10% of all donations made to Alberta based charities up to a maximum of $1,000. The exception is religious organizations, however exemptions are made for those representing nondenominational community- and social services. In aggregate, ATB will contribute up to $100,000 in matching funds against the total donations made to Alberta causes through the ATB Cares site.

The bank intends to launch a variety of different donation-matching programs throughout the year. Presumably some of these promotions will be focused exclusively on specific charities selected by ATB.

Presently, ATB has a dedicated Facebook page established specifically for the ATB Cares initiative. Although ATB is active on Twitter with multiple accounts, the bank has been almost silent about ATB Cares in its tweets. Nothing really at ATB’s main corporate Facebook page either. But it’s refreshing to see a financial institution finally resisting the urge to drown every single promotion it runs in thick layers of unnecessary social media sauce.

Nice job, all the way around.