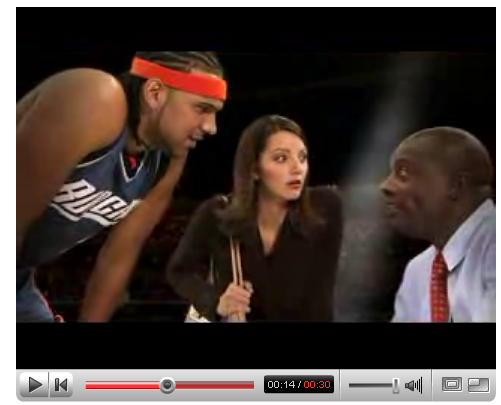 This is the third spot in a series from Charlotte Metro that feature NBA stars.

The $150 million credit union has clearly embraced TV advertising with its sizable investment. Consider the cost of things like celebrity endorsements, a professional production company, location shoots and crowd shots. That stuff isn’t cheap.The spot dwells on two messages: “free checking” and “anyone can join.”

Because TV ads are always seen by a large non-member audience, choosing free checking as the spot’s main product offer is logical. But the ad squeezes in some quick blurbs about “online banking” and “home deposit” that viewers aren’t likely to retain. Most people won’t remember more than this: “Bobcats,” “NBA,” “Charlotte Metro,” “free checking,” and “anyone can join.” That’s if they remember that much. It takes a lot to really drive a point home to today’s advertising immune audience.

According to actress Kara Edwards who appeared in the commercial, the spot took a full day to shoot on two locations. It was written by Nathan Tothrow and directed by Joanne Hock of Emulsion Arts. The cinema-quality special effects were added by Tony Elwood of Indievision.

Reality Check: TV ads are effective tools for building brand awareness and shaping perceptions over the long term, but they seldom trigger any direct or immediate reaction from the audience. Be clear about your expectations and objectives before pursuing a television advertising strategy.

It looks like Charlotte Metro is doing things right. They aren’t skimping. They seem to be in the capable hands of partners that can be trusted. And the final product will likely create positive brand associations with a wider audience.

Bottom Line: Good TV ads cost money. First there’s the production, then there’s the media buy. Making cheap spots and/or airing them only a few of times is a complete waste of time and money.

Key Question: How does Charlotte Metro measure the impact or results of TV ad campaigns like this?