2013 marks the third year The Financial Brand has fielded its annual “State of Marketing in Retail Banking” study. This year, research was conducted in partnership with Aite Senior Analyst Ron Shevlin.

Those who completed the entire survey will receive a free copy of the Aite Group report based on the marketing data analytics section.

The Financial Brand would like to extend its deepest gratitude to the nearly 300 or so participants who completed this year’s survey. Without your gracious contribution of time and insight, this study would not be possible. On behalf of The Financial Brand and all its readers, thank you.

If you value the information provided in these studies, please participate in next year’s survey. This is a unique research project — probably the only one of its kind in the retail banking world — and broad participation is necessary to increase its worth to everyone. Most readers of this website are marketers who field many surveys themselves, so you’re familiar with how challenging it can be to recruit survey respondents. Think of it as good survey karma.

It’s no surprise that bank and credit union marketing execs say that insufficient budgets and/or manpower is what’s holding them back. For the second year in a row, this was cited as a major challenge by at least a third of all respondents (33.8%). This was followed closely by difficulty measuring marketing ROI — a challenge for nearly 4 out of every 5 financial marketers.

Reality Check: You’ll get more money in your budget just as soon as you can prove you deserve it. If you can’t demonstrate an ROI, why should your CEO allocate more resources to marketing?

Inadequate MCIF/CRM databases were the third most commonly cited challenge facing financial marketers in 2013 (29.7%), with “limited data analytics tools/capabilities” coming in at #6 on the list. Clearly the financial industry is in no position to capitalize on the promise of “big data” this year. Banks and credit unions have a long way to go before they’ll be in any position to wield terabyte-sized data sets.

Only 15.9% of all financial institutions think social media is a major challenge, and 7.2% think consumers’ lack of trust is significant hurdle. 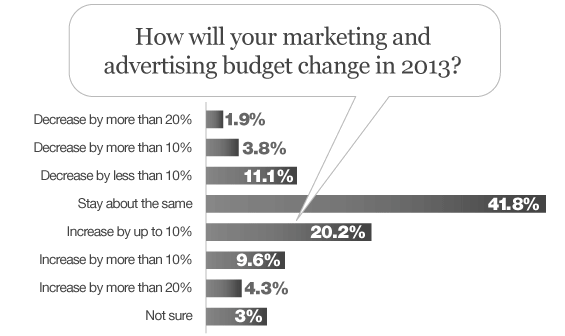 The Financial Brand has previously noted that marketing budgets at banks and credit unions should equate to roughly 0.1% of assets — a $1 billion financial institution should have a marketing budget around $1 million.

For this question, respondents were asked to rank their top three marketing priorities over the next 12-24 months. The data in the table signifies the number of respondents who ranked that priority either #1, #2 or #3 on their list.

Last year, loan growth was #2 on the list. This year, loan growth climbs to the top spot, with nearly 60% saying it is one of their top priorities. Cross-selling to existing customers outranks new customer acquisition by a factor of 2:1. And only 1 in 10 think customer churn is an issue they need to focus on in 2013.

Top 20 Most Important Products & Services to Promote in 2013

Even though financial marketers say “loan growth” is their most important strategic goal in 2013, they rank “mobile banking solutions” as the most critical thing to push this year… followed by auto loans (58.5%) and home loans (57.6%).

Interestingly, home equity loans/lines ranks higher than mortgage refinancing. This is odd for two reasons. First, no one really has much equity in their home to borrow against. Second, mortgage rates are at the lowest point ever, and consumers are hot to trot.

For all the hoopla surrounding prepaid cards in the last couple years, they didn’t even scrape the top 20. Only 7.4% of banks and credit unions feel prepaid cards are important product to market in 2013.

Financial marketers’ attention is clearly shifting to online and digital channels. When asked about the media channels they felt would be most important in 2013, 7 in 10 put online advertising and social media at the top of their list.

Print ads are the big losers. Roughly one half of all financial marketers say print advertising is less important — 9.3% more than those who said the same thing last year. A third feel TV and outdoor advertising will are also less important this year.

Three out of every five financial institutions place heightened importance on their onboarding program in 2013 — an 8.3% increase over last year, and the single biggest gain.

Onboarding could be a bit tricky when 1 out of 5 financial marketers aren’t sure where their CRM system fits in.

The vast majority of retail banks and credit unions use ad agencies and web development firms. 71% of respondents said they retain the services of an ad agency in 2013, up 6% since last year.

The areas where financial institutions will be seeking the most outside help? Roughly 1 in 20 say they intend to work with a social media vendor this year. A similar number are looking for a partner to help them get their customer databases integrated. One in 22 will use a market research firm this year, and 1 in 26 expect to hire a consultant specializing in marketing/branding strategy. One in 30 intend to use a vendor for either online advertising, video/radio production or financial education services in 2013. 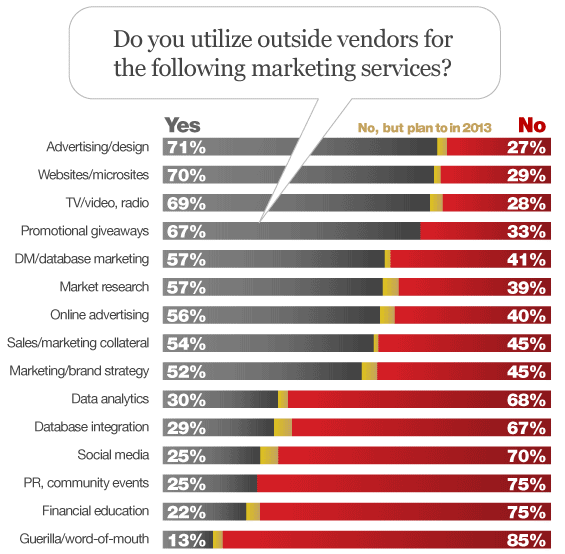 Bank and credit union marketers have ambitious plans to improve how they track and monitor the success of their efforts. One in eight plan to either start using depth-of-relationships, wallet share, products-per-household or some similar metric to benchmark marketing performance. A similar number intend to start tracking attrition/churn rates.

One in ten intend to utilize more qualitative methods: focus groups, net promoter score (NPS), or internal brand audits/assessments — or all the above. 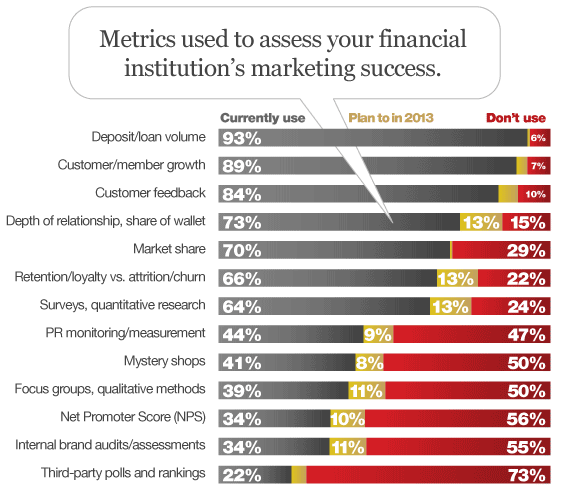 For those financial marketers still scratching their heads about what “big data” is or isn’t, here’s a simple way to look at it: imagine combining all the sources of information above into one single megafile, then writing algorithms to triangulate it into something that predicts consumer behavior.

Now 3 out of every 4 retail financial institutions are engaged in at least one social media platform — more than any other digital channel, and a 7.5% increase over 2012. Another 11% say they have plans to start using at least one social media platform by the end of the year. If that happens, a stunning 87% of all financial institutions will be using social channels in 2013.

One in four financial institutions plans on adding an online account opening process to their website this year. One in five will start marketing their services over mobile devices. 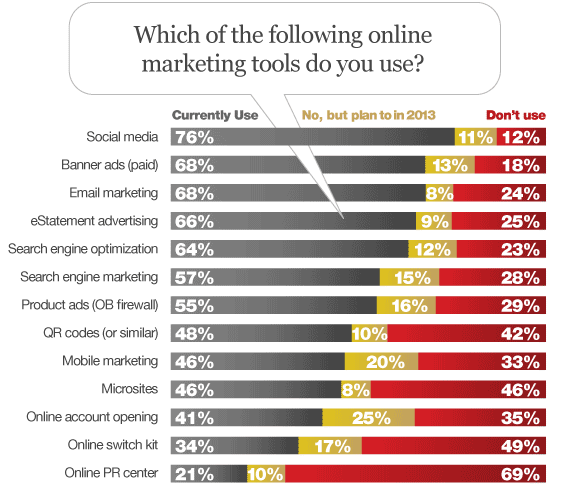 Oddly, those who say they use Twitter decreased from 54% in 2012 to 52.4% in 2013 — a drop of 1.6% — even though one in ten financial institutions said they planned to adopt the microblogging service last year. This year, 12.3% say they plan to start tweeting, but if the trend in 2012 continues, the percentage of banks and credit unions on Twitter could fall below 50%. As The Financial Brand has noted previously, 1 in 5 banks and 1 in 5 credit unions toying with Twitter have quit. 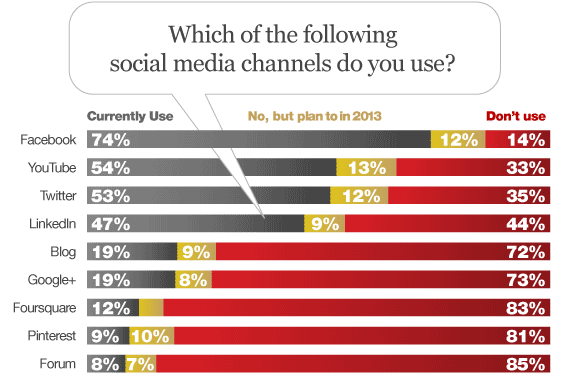 Nearly half of all financial institutions say they aren’t presently monitoring the social web for mentions of their brand. Nevertheless, 1 in 5 say they “never or rarely” see anyone talking about them on social networks.

Reality Check: Social media experts tell financial institutions they need to be “listening.” Just don’t be too disappointed when you don’t find anyone talking about you.

38% of all banks and credit unions don’t see more than five social mentions per month. More than half will find 25 or fewer. A third have no clue.

Somewhat ironically, for as much as financial institutions  bluster about how important social media is and will be… for as much as they use social channels and continue to sign up for them… Most banks and credit unions only spend less than 10 hours a week on it. 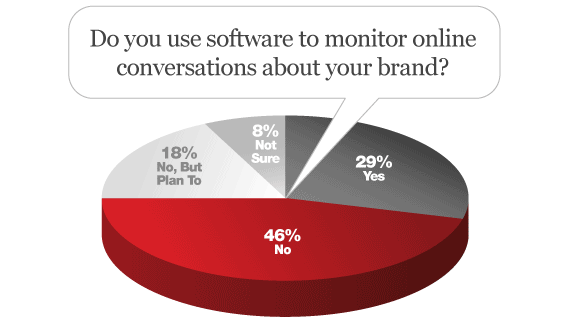 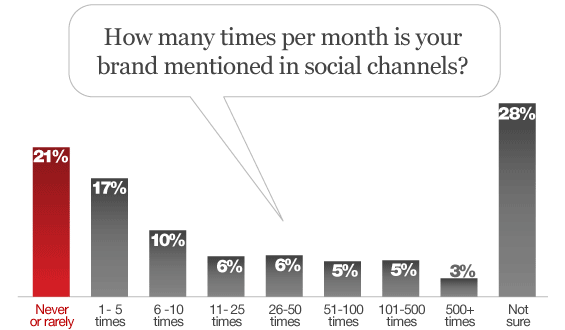 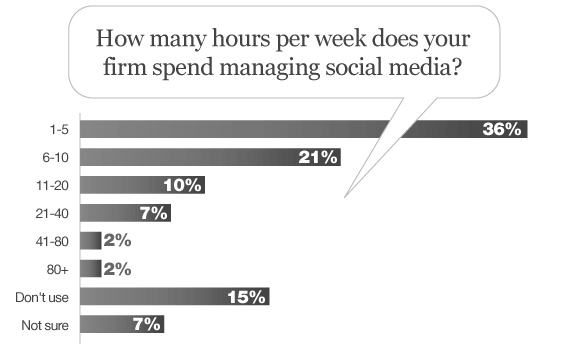 Just shy of 300 banks and credit unions participated in this year’s study. Most of the respondents (77%) hailed from the U.S. Another 9% came from Europe/UK, 5% from Canada, and 4% from the ASPAC region.

A fairly even cross-section of all retail financial institutions were represented: 32% banks, 15% community banks and 53% credit unions (basically split 50/50 between banks and credit unions). 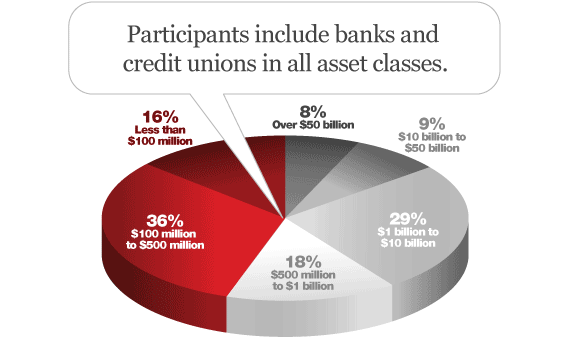 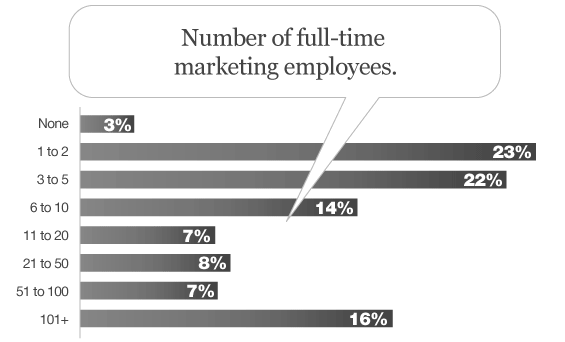 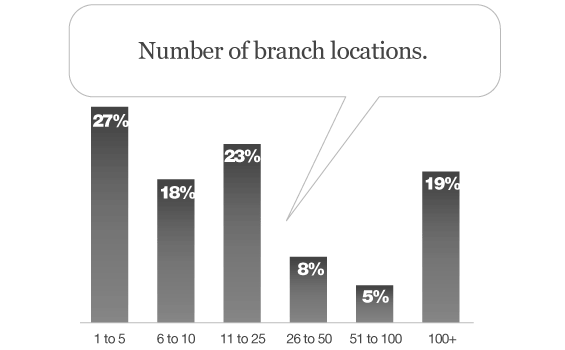