Five designs to choose from, and none of them look like anything you’d ever expect to see from a financial institution. The cards say a lot about the credit union (e.g., unstuffy). The artwork cool enough that these should be popular with younger consumers throughout the year — not just at Halloween. 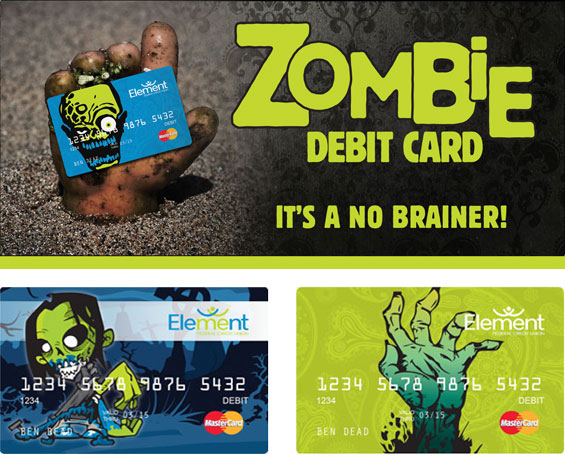 The credit union offered a modest prize (only $150), but gave participants three ways to enter: (1) Post a memorable Halloween story on the credit union’s Facebook page, (2) submit a photo of your pet in a Halloween costume, or (3) upload a picture of your pumpkin carving. There are many financial institutions doing one of these three Halloween-themed promotions, but Pegasus is the only one that merged all them into one. It makes for a more robust and multifaceted campaign, and it’s nice to give people a range of ways to enter. Not everyone is gifted at carving pumpkins or likes to dress up in costumes. 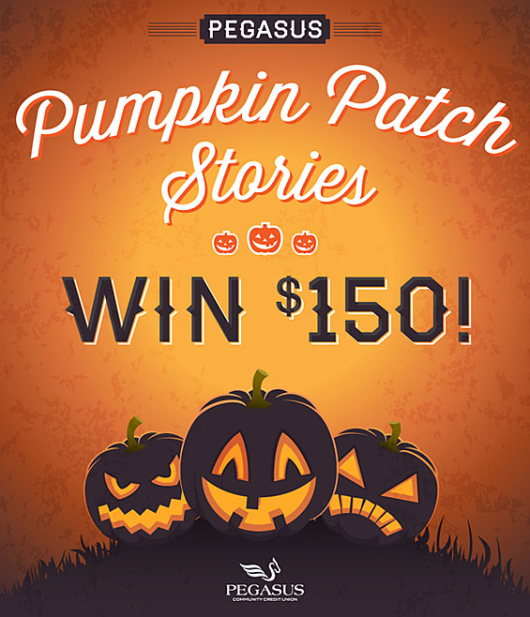 Logix asked its Facebook fans to carve pumpkins in the likeness of the credit union’s mascot, a robot dubbed “Robix.” They provided Robix stencils and a how-to YouTube video to spur people’s creativity. They also pointed folks to their Pinterest page where they could find different robot poses. 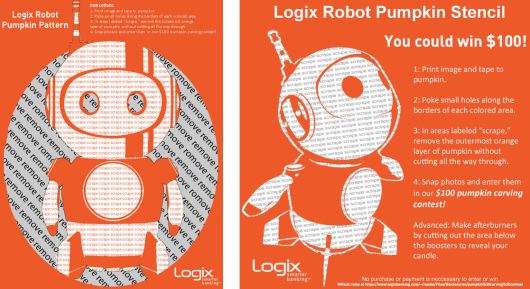 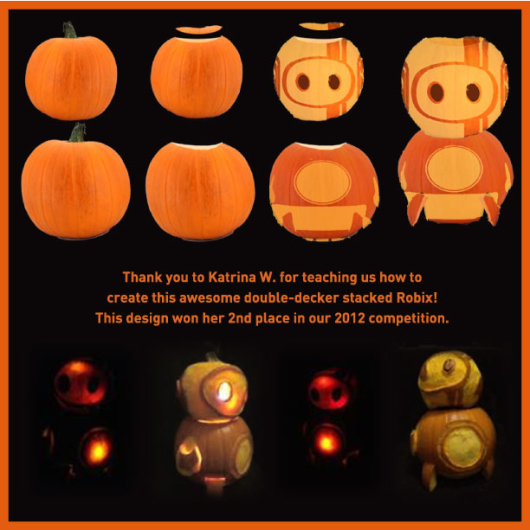 Here’s a funny one-minute parody video found on YouTube that pokes fun at banks. The copywriting is excellent, and the video production isn’t too shabby either, particularly for a $250 million credit union.

The credit union was the primary sponsor of the 2013 Zombie 5K Crawl, a local charity event where everyone dresses up as a zombie and slogs their way along a 5K route. They capitalized on their sponsorship by holding an auto loan sale “with rates so low, they’d put a smile on a zombie’s brain-eating face.” 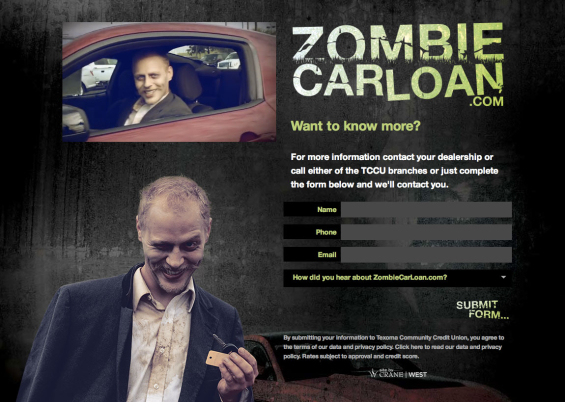 The Financial Brand estimates that approximately 25% of all banks and credit unions put up some sort of Halloween-themed artwork on their Facebook pages. Of those, maybe one in five dressed up their main cover photo. But only one of the 500+ financial institutions that The Financial Brand looked at this Halloween went all the way with it: spooky artwork in their cover photo, in their profile photo and even in their dashboard of tabs for apps and widgets. And if you click on the cover photo, it expands to show you more of the illustration — a nice touch. It’s well done, and a lot less scary than the profile approach taken by rival PenFed. 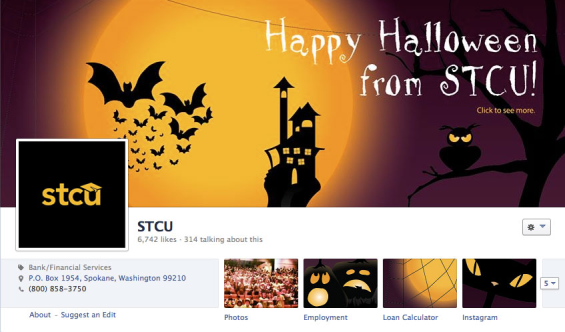 The credit union hosted a Halloween costume contest on Facebook, allowing fans, friends and family to vote for their favorites. The winner gets $150, and the runner-up gets $50 (which is about the average size cash prizes you see for these kinds of costume contests from financial institutions). 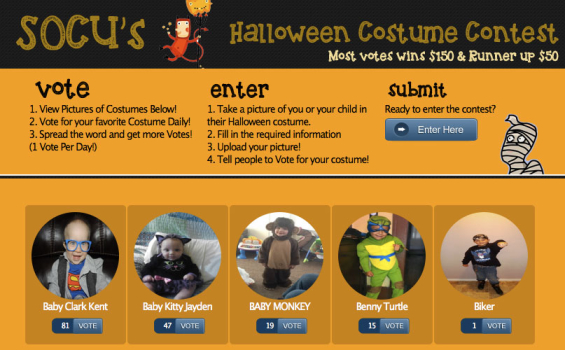 The photo voted as the spookiest, kookiest and most boo-tiful by Webster’s Facebook fans wins an iPad Mini. The runner up gets a $50 Visa gift card.

There will be two rounds of voting, with the top five entries from the first round advancing on to Round 2. Round 1 begins on November 1 and ends November 15. Round 2 will run November 15-22.

This is the second year in a row the credit union has run this promotion, so they must like it and/or think it’s working. 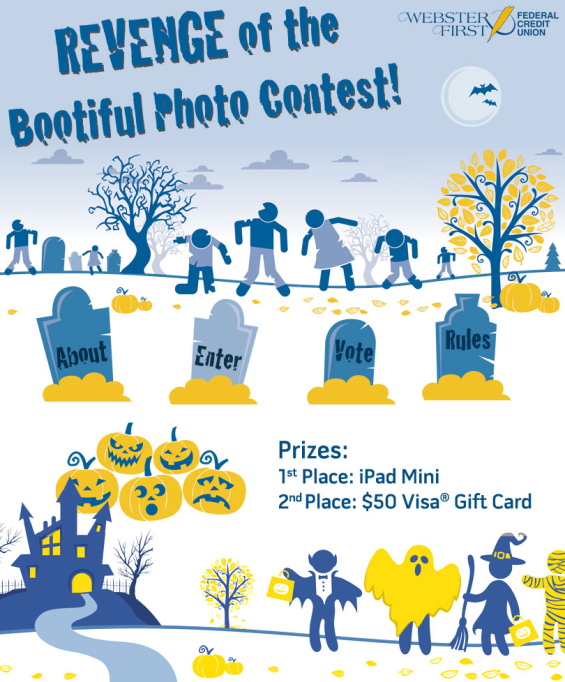 Using the headline, “No Tricks. $100 Treat,” Rivermark offered “Screaming Deals” — a fixed rate down to 1.74% APR* and no payments for 90-days on both new and refi auto loans. No one said you couldn’t use a Halloween theme to sell financial products, and yet most banks and credit unions choose not to.

A month-long sales campaign offering 1.85% APR on any new/used vehicle from October 2 through November 2. The rate applies to cars, boats and motorcycles. The credit union’s simple landing page has an ultra-streamlined loan calculator sitting right next to the rate so consumers can quickly see how much they can afford at 1.85%, which is smart — it makes the loan seem cheap to consumers (because it is cheap). 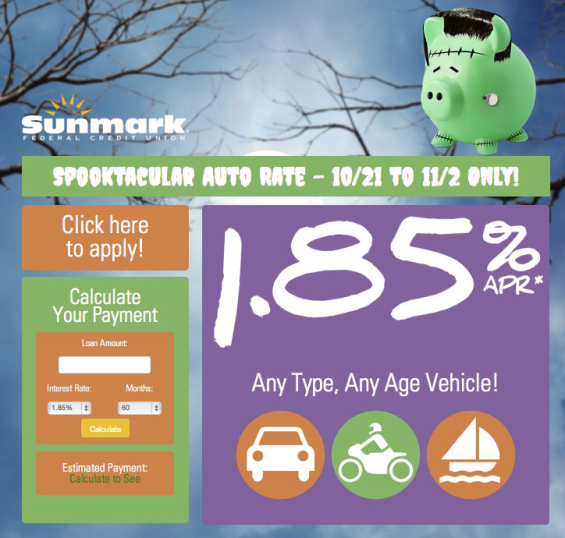