With customer sentiment at an all time low and a raft of new players entering the banking space, the last thing any financial institution wants to hear is bad news about their brand. But the reality is, consumers view most banking brands as undesirable and wholly undifferentiated. That’s why the battle cry ‘Differentiate or Die’ has never been more relevant in the financial sector.

In February 2012, Clear released the results of its second Brand Desire survey, which explored the brands that 22,000 people across the world most desire and why. The survey involved 555 brands across many different industries, including financial brands such as Amex, Citi, HSBC, ING, GE, MasterCard, Visa USAA, Allianz, StateFarm, Bank of China and Standard Chartered (among others).

Globally, financial brands ranked as some of the lowest when rated along statements such as ‘a brand I feel attracted to’ and ‘a brand that matters to me.’

The data also confirmed what we all intuitively know about banking brands: they are virtually identical in consumers’ eyes. Every bank in the study was seen as being highly ‘organized’, ‘serious’ and ‘sensible.’ It’s rare to find a bank that stands for much else. 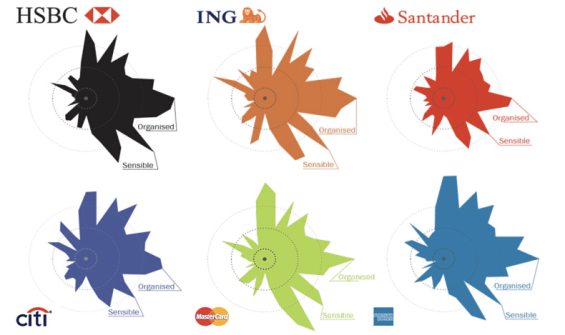 There were a handful of financial institutions that performed well in terms of their overall brand desirability. In the UK, for example, the most desirable retail bank, First Direct, ranks at 188 out of 300 brands, four places below Aldi and 73 places behind Tampax.

Over the last century, banks have converged towards one standardized personality template, with very few financial service brands standing out from the crowd. No other industry in the study — not even the oil industry — suffers from such a profound lack of diversity.

Banks have convinced themselves they have to be conservative. They think that above all else, a bank must be credible and credit-worthy — especially in these times of crisis when they are all trying so hard to rebuild the industry’s battered reputation.

But can the big banks really just fall back on this age-old formula to save them, to get them through the dark days that still lie ahead?

The financial sector has been rocked by a rapid influx of new players who shake everything up with all kinds of innovative technologies. Brands such as Mint, Zopa, Dwolla, Billmyparents, Smartypig and Square are changing the way we interact with our money and could pose a real threat to older, more traditional players.

And the threats don’t stop there. There is also a set of credible, established brands wielding the marketing muscle and — more crucially, far more desirability — who are well-positioned to take advantage of the changing dynamics sweeping the financial landscape.

Consumers no longer find the idea of banking with retailers such as Wal-Mart, Tesco or John Lewis strange. There’s also a very real threat from brands like Apple, Google and Amazon. These brands are all highly desirable and very well-respected. They have the capability to make the most of technological advancements, and possess the credibility to pull off great things. Case in point: Google Wallet, definitely a warning shot across the bow of banks. There’s plenty more coming on the horizon.

If a big bank brand can’t (or won’t) shake the industry up by being more engaging, imaginative… fun even, then the door will be wide open for brands like Apple to slip in and steal everyone’s attention… along with their money. The choice is simple: the industry has to change itself proactively now, or be forced to change with it later.

There is light at the end of the tunnel, even for some of the larger, more established players. There are some very interesting financial services brands around the world that are bucking the trend in terms of desirability, and achieve the financial results to match. These brands don’t just stand for being ‘trustworthy,’ a prerequisite in the financial space. Each brand offers something more: a clear and inspiring purpose, and a very unique personality profile from its peers. USAA, Paypal and State Farm are 3 such brands.

USAA doesn’t see itself as simply a supplier of financial services. Its purpose is to serve military personnel “who stood tall for this country and for their families,” and to “stand ready to return the favor,” giving members the kind of end-to-end support system they’ve earned. USAA is the top performing financial services brand in the Clear Brand Desire study, and is ranked as the America’s 15th most desirable brand across all categories. It has a significantly different personality profile from other financial services brands in the US — scoring well on ‘reassuring,’ ‘approachable’ and ‘focused on well-being.’

PayPal aspires to be about more than just a provider safer online payments. It sees its purpose as “creating a better shopping experience from start to finish, no matter what’s being bought, how it’s being paid for, or where it’s being sold.” PayPal is ranked #21 in the Brand Desire table in the UK — the only financial services brand to break the top 100 — and is ranked #23 in the U.S., just behind USAA.

State Farm ranks as the #48 most desirable brand in the US Brand Desire study — significantly ahead of almost all other major U.S. financial institutions. State Farm was ranked as 37 on the 2011 Fortune 500, and boosted profits by a billion dollars last year, even while it continues to recover from the hits taken during the financial crisis, back when fewer people needed/could afford auto and homeowner’s policies. 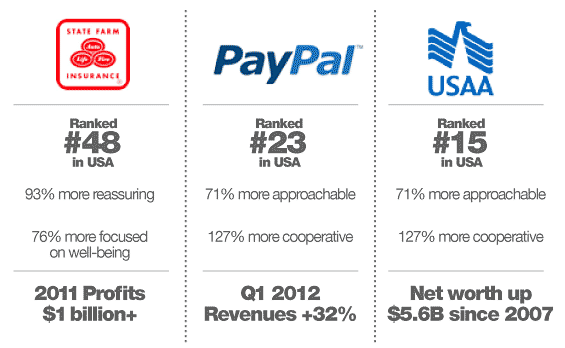 So how do they do it? There are four simple rules that these brands follow to create more consumer desire and affinity:

In a fast-changing world, the financial services brands that will live to fight another day are those that stop wasting millions of marketing dollars trying to differentiate on a pinhead, and instead start to connect with their customers as real people rather than as numbers. This means identifying an inspiring purpose in people’s lives plus a personality to match, then living it consistently across the whole customer experience.

The lesson for financial services brands is clear: either win consumers’ hearts or risk watching them walk away.