Subscribe Now Get The Financial Brand's FREE Email Newsletter
As part of its 75th anniversary celebration, Desert Schools FCU has pledged to give $1 million to charities in 2014. The heart of the campaign is a year-long online voting contest among six civic organizations for a $30,000 endowment.
Subscribe Now!

In January, when Desert Schools FCU kicked off their 75th anniversary celebration, the credit union made a huge philanthropic promise. They announced they would be giving away a whopping $1 million in charitable donations over the following 12 moths.

The charity drive is being wrapped under the umbrella campaign theme “Shine On.” At the center of the Shine On campaign, six local non-profits are competing for a $30,000 grand prize. Highlighting charity organizations in six categories, the projects selected serve to better the arts, animal welfare, education, health, neighborhood beautification and youth development.

Each of the six charities received an initial boost in funding totaling $7,500 at the kick-off of the Shine On campaign.

Voting runs through the end of the year, and the main $30,000 prize won’t be awarded until sometime in January 2015.

Presently, the top two charities in the lead are “Operation School Bell” and the Halo Animal Shelter, each with more than 180,000 votes. The current organization in third place is way behind, with only 47,446 votes. The animal shelter had been in first place earlier in the year, with a 10,000 vote lead, but the folks behind Operation School Bell had aggressively campaigned their supporters for more votes.

It shouldn’t surprise anyone if the educational charity behind “Operation School Bell” comes out the winner. After all, Desert Schools FCU has the word “Schools” in its name, and has built its legacy serving teachers. Some might wonder if it’s a fair fight. 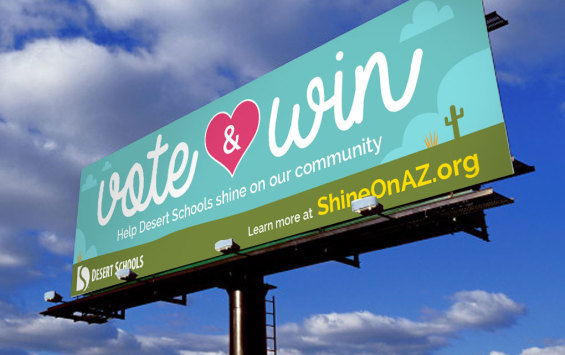 The Cost of Driving Awareness

Desert Schools says the purpose of the Shine On initiative isn’t to open new accounts or get more loans; it’s primarily an awareness campaign. The credit union is hoping to stress its Arizonan roots by highlighting a 75-year history supporting local communities and local civic organizations.

“We set aside $75,000 in grant money for the six different charities, $75,000 in member prizes for monthly raffles, and $200,000 in costs to develop a marketing campaign, which included website development, a promotional video and other advertising collateral,” Cathy Graham, VP/Marketing at Desert Schools, told the CU Times.

With $3.9 billion in assets and over 300,000 members, Desert Schools spent just shy of $8 million on marketing in 2013. They are on pace to spend roughly $5.5 to $6.0 million in 2014, so the $1 million charity commitment is nothing to snicker at, representing approximately 15% of their overall marketing budget.

The Shine On philanthropic initiative is being supported by a full-scale marketing campaign, developed by Anderson Advertising & Public Relations out of Scottsdale. Key media include TV spots (10-, 15- and 30-second versions), radio, outdoor, in-branch merchandising, email and public relations outreach. The campaign is anchored by a dedicated microsite, www.shineonaz.org. 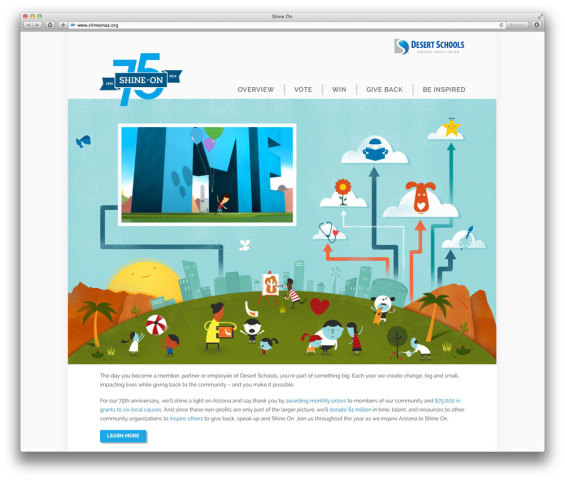 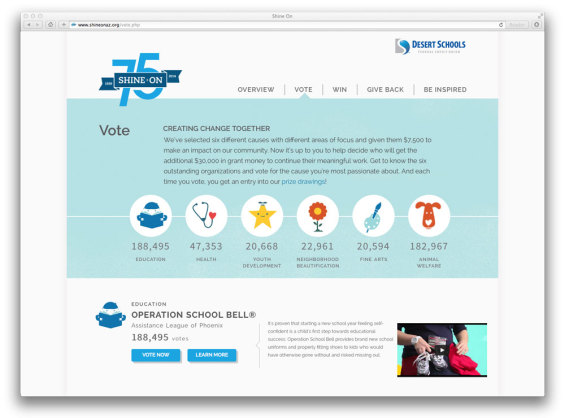 There have been nearly 600,000 page views to the campaign’s microsite. Desert Schools saw over 100,000 votes and 27,000 visits to the website in June alone — a 34% increase just over the month of May, with each month growing stronger.

Direct traffic to the Shine On site comprises 85% of total traffic sources, and Desert Schools says they see a modest 18% bounce rate — both are impressive (and uncommon) stats. More than half of all page views on the microsite have been on the voting pages, which the credit union says illustrates the sustained level of engagement the campaign has been able to achieve.

Since the implementation of the Shine On campaign, Desert Schools’ Facebook page has had more than 1.3 million impressions, 4,500+ shares, and over 800 new ‘Likes,’ bringing total ‘Likes’ to over 11,400. On Twitter, where the credit union has considerably less traction, they still received more than 250 new followers, 1,600 clicks to Shine On posts and over 100 retweets.

For financial institutions toying with the idea of a prolonged campaign like Shine On, Graham offers this advice: “If you’re going to do a contest designed to last months or more, make sure you have a great plan for avoiding fatigue and keeping your audience engaged.”