BofA’s brand is in the toilet. At least that’s what every journalist and blogger in America seems to believe. Headlines like “Bank of America Shines TARP-Tarnished Image,” and “BofA Uses Its American Heritage to Start Rebuilding Its Brand” assert a populist, pitchfork presumption that BofA’s brand is in the doghouse.

Is this fair? What is it that causes people to draw this conclusion? Smarmy marketing? Predatory lending? Subprime foibles? TARP? In BofA’s case, it seems that there is little more than the belief that “big banks are bad.”

People may despise TARP because the temporary recapitalization system wreaks of “bailout,” but you can’t take shots at BofA’s brand for the bank’s participation. BofA didn’t really need- nor want to receive TARP money. As you may recall, every major bank in the United States had TARP money crammed on its balance sheet so as to not trigger runs on deposits at “sick banks.” In late 2009, less than a year after receiving TARP money, BofA announced it would give it all back, which was probably as quickly as Congress allowed. Early in 2010, BofA became one of the first big banks to fully return its TARP funds — $45 billion — along with billions more in interest for taxpayers.

In many ways, BofA’s forced participation in TARP could be viewed as a government-imposed dowry for the bank’s acquisition of Merrill Lynch… another decision for which BofA is often ridiculed. Why is that? BofA had always wanted to break into the retail investment sector, and had lusted after the Merrill Lynch brand for years. When the opportunity finally arose in late 2008, Bank of America snatched up the venerated investment brand at a firesale price. Some onlookers rushed with their judgments — “the sick preying on they sicker,” as it were. But it’s hard to criticize BofA when you compare the deal’s potential with its cost and risks.

There are also critics who deride BofA’s 2008 acquisition of failed subprime lender Countrywide. Again, this wasn’t a rash decision. It was part of a decades-old strategy to evolve BofA into — quite literally — “America’s all-purpose bank.” Step 1: Back in the 80s and 90s, the bank established its ubiquitous branch and ATM presence. Step 2: Then it expanded into credit cards by acquiring MBNA. Step 3: And in 2008, it was time to expand into yet another market — home lending. When Countrywide went on the auction block, BofA made its move — again at a firesale price. Prior to the acquisition, BofA’s relative share of the mortgage market lagged behind other big bank lenders like Wells Fargo and Chase, and BofA knew it needed to shore up its mortgage business. If it didn’t, it risked seeing smaller banks like WaMu balloon into major retail banking competitors.

It’s hard to imagine the consequences had BofA not scooped up Merrill and Countrywide, but one could argue that the bank helped prevent a further- and greater collapse of the financial system. Despite rescuing these two huge, troubled financial institutions (and taking a mountain of flak for it), BofA has remained profitable throughout the financial crisis, spare a quarter here and there. Since January of 2000, Bank of America has reported cumulative net income of more than $114 billion, more than any of the large, U.S. money-center banks.

Would it have been possible for BofA to achieve this level of performance if it was knee-deep in subprime doo-doo? Unlikely. In fact, a BofA spokesperson told The Financial Brand that the bank had exited the subprime mortgage lending business in 2001. If you haven’t been seeing any media coverage about BofA’s subprime exposure or about a predacious decay in its lending standards, it’s because there is no story. If there was, we all would have heard about it. Big time.

Some lash out at BofA saying the bank could be lending more to help the economy, even though BofA lent $760 billion in 2009. That’s roughly $3 billion every business day, and way more than other financial institutions. And what about those folks who have lost their jobs or are underwater? Since 2008, BofA has modified the loans of some 600,000 customers, including principal loan reduction in some cases. Does that sound like a big, bad bank?

Reality Check: Financial firms like Lehman Brothers and Bear Stearns (along with their conspirators at ratings agencies like Moody’s) had a lot more to do with the economic mess we’re in now than most major banks. But that doesn’t matter. People need villains they think are responsible for the financial meltdown, so they blamee big banks they know instead of the obscure and exotic investment firms they don’t understand.

It’s very hard to argue with BofA’s marketing acumen. The bank smartly aligns itself with all things American. They call themselves the “Bank of Opportunity” because it reflects the American Dream — new beginnings, building things from scratch, entrepreneurial spirit, etc. BofA realizes banks will never transcend into “cool” status and have real fans, so instead they draft off the caché of American sports franchises to offer co-branded checks and debit cards sporting people’s favorite teams. BofA is the official sponsor of the NFL, Major League Baseball (America’s pastime), the Dallas Cowboys (America’s team), the NY Yankees the Olympics and NASCAR. They may as well declare themselves the Official Sponsors of Mom & Apple Pie while they’re at it.

Kiefer Sutherland (aka Agent Jack Bauer, America’s hero) narrates this spot (circa 2009) over an awesome soundtrack. The script reads: “This is America. And no matter how… No matter where… No matter what… We… keep… moving forward.” How can you not feel inspired? 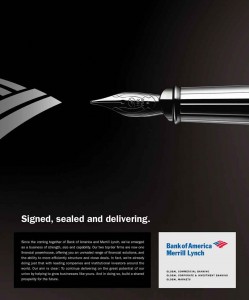 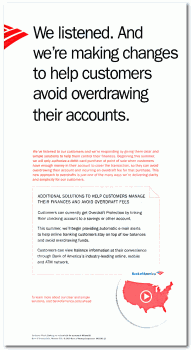 Some critics accuse BofA of trying to “advertise its way back,” even though the bank cut way back on advertising in 2009. When you do see an ad for Bank of America (which really isn’t all that often), the approach is practical, with messages striking the right tone, acknowledging the industry’s mistakes, and spelling out how BofA is fixing what went wrong.

In 2009, BofA established Clarity Commitments, simple straight forward summaries of debit, home loan and credit card accounts. BofA was the first — and remains the only — big bank to eliminate Overdraft Fees on debit card purchases, something so wildly unpopular with the rest of the industry that everyone else is waiting until the very last second before implementing Reg E.

In all fairness, you have to admit BofA has been proactive and very strategic throughout the crisis and its recessionary wake.

Bottom Line: People may think BofA’s brand is in the doghouse just for being a big bank, but you can be sure that years from now, BofA’s brand will still be strong. They may be big, but it’s hard to argue with BofA’s strategy and performance. They seldom make a misstep.