During the 2010 Super Bowl pregame show, The Credit Union of Johnson County ran an ad announcing its new name — Mainstreet. The new moniker is meant to align the credit union with the sensible Midwest values of folks living around Kansas City, where the credit union is based, while distancing itself from the widely-reviled greed of Wall Street. The Financial Brand talked with John Mathes (pictured left), Director of Brand Services at Bancography, about the firm’s name and brand work for Mainstreet.

Financial Brand: Why change names?
John Mathes: Primarily because the credit union is growing outside of its original geographic trade area. The credit union recently merged three others into its operations — two in Kansas and one in Missouri. With its reach extending beyond Johnson County, John Beverlin, the CEO, felt it was time to change the name.

Secondarily, the original name was burdened by sounding as if you had to be a county employee to belong. The original charter was for the Johnson County Teachers Association. 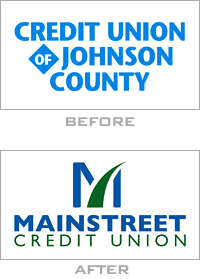 FB: Why ‘Mainstreet?’
JM: It doesn’t get any more “Main Street” than suburban Kansas City. The members and associates (staff) all embody the tenets of the new brand as we’ve crafted it.

The huge coup here is the on-going, numerous references to “Main Street” vs. “Wall Street” in the media. Every time they mention it, it is a mention for Mainstreet Credit Union.

Never has a new name been launched with so much “pre-awareness” already established for the “big idea” behind the brand. The whole Move your Money grassroots effort, and the flight to safety from Wall Street, plays right into the essence of the new brand.

FB: How is the brand being positioned?
JM: “We live where you live.”

FB: Is there a new slogan or tagline?
JM: We haven’t settled on a on-going slogan…and may not have one. The main copy point for the brand launch is: “You’re not Wall Street. Neither are we.”

FB: Was research used as part of this process?
JM: Yes, in a couple of steps. First, Bancography established benchmark awareness and attribute rankings, as well as a market share and competitive analysis. The development of the brand positioning and name alternatives were a result of the Bancography Brand Map process. Communication audits were also performed with the credit union’s primary competitors.

As the process wound down and we got closer to the name selection, qualitative focus groups coupled with quantitative verification (telephone intercepts) were conducted with both members and non-members in the trading areas. The credit union’s associates also participated in separate focus groups.

FB: How did the credit union approach the name rollout?
JM: The name and brand was launched internally first back in mid-November. Great care was taken to be sure that every associate understood the process, the rationale and the reason for the change. Outside sales training consultants are assisting with the transition.

Member awareness was the second phase. The credit union took great care to explain the rationale behind the change and to reassure members that it was not being taken over. 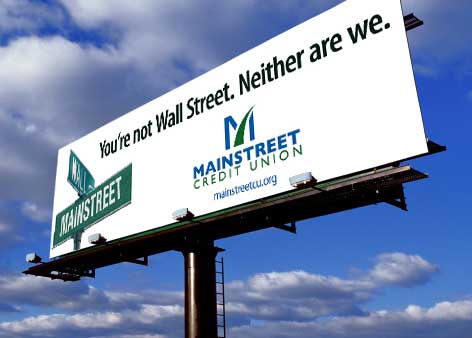 You’ll notice the advertising elements do not mention the old name. This was careful thought-out strategy, so as to not burden ads with any explanation. The idea was that if someone was not currently a member, it would be for one of two reasons: they had already dismissed the Credit Union of Johnson County (for any number of reasons), or they simply weren’t aware of it. So there was absolutely no benefit to making the connection.

FB: How long did the whole process take?
JM: The original market survey for benchmarks and the kick-off “ideation session” for the Brand Map process took place in November 2008.

FB: What’s the timeline for rolling the brand out?
JM: The credit union will implement its new brand over several months, changing out signage, print materials and advertising.

FB: What size is the credit union?
JM: The credit union has $240 million in assets, over 52,000 members, eight branches and two satellite locations in the Kansas City area.

[Editor’s Note: The Credit Union of Johnson County has applied for a trademark with the U.S. Patent & Trademark Office. There is already a federally registered trademark for “Mainstreet Financial” for a financial planning firm. There is also another credit union named Main Street Financial FCU in Louisiana (formerly LA DOTD FCU). Domestic Bank in Rhode Island has held a USPTO federal trademark for the phrase “We’re Main Street, Not Wall Street,” since 1998. The bank still uses the slogan on its website today.] 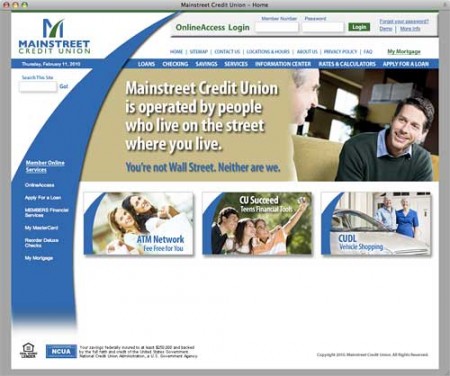