Subscribe Now Get The Financial Brand's FREE Email Newsletter
A credit union's balloon crash lands in someone's backyard — 1,000 miles off course — after traveling all the way from Michigan to Maine.
Subscribe Now!

On Monday, September 15th, Nancy and Sanford Robinson found a balloon had crash landed in their backyard — not a giant hot air balloon, but a typical children’s balloon once filled with helium. The red balloon had shriveled down to about the size of an orange, but the logo imprinted on its side was still legible: “First United Credit Union.”

The Robinsons, who live in Foxcroft-Dover, Maine (population 4,213), were curious where the balloon came from, so they hopped on a computer to see where First United was based. Turns out the $29 million credit union was located in Grandville, Michigan.

Apparently the balloon had traveled over 1,000 miles before finally laying to rest in the Robinson’s yard.

How did the balloon get from Michigan to Maine? Was this part of a crafty publicity stunt? Apparently no. It was just a happy accident.

“We think a balloon became lost from its owner at an event we sponsored earlier this summer,” explains First United President/CEO Mark Richter. “We sponsor many community events. We’re always there to support our members with giveaways, refreshments and balloons for the kids.”

“We give balloons out daily, so perhaps a child accidentally let the balloon go,” Richter speculates.

The credit union isn’t entirely sure when the balloon was lost, so it’s impossible to know how long the balloon’s flight took. Travelling roughly 10 miles an hour, the balloon could have completed the trek (all 903 miles, as the crow flies) in as little as four and a half days. 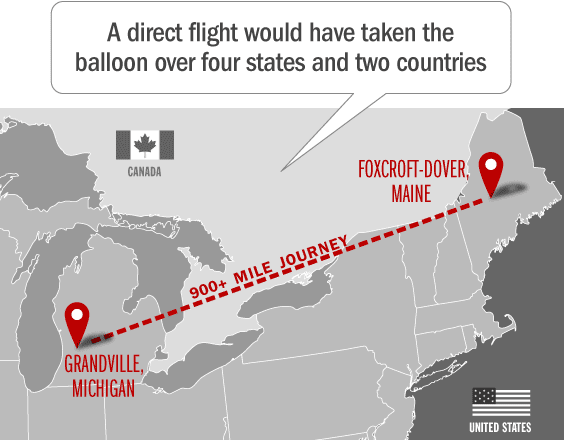 Even though the balloon’s trip was an accident, First United knew the story was noteworthy enough to bang out a quick press release. They figured they could squeeze the balloon (yuck, yuck) for some extra PR mileage.

“Everyone believes in doing business over long distance with ease and convenience,” the credit union said in a statement distributed to news organizations. “First United takes this strategy to a new level with its incredible story of one small, red balloon.”

“How far will your financial institution go for you?” the press release continues. “We always goes the extra mile for members.”

Banks and credit unions around the world pound out thousands of press releases every week. Most are stuffy, dull, predictable announcements that generate little interest and even less press. They are, in a word… boring. There’s no hook, nothing noteworthy or unusual, no life, no personality. There is no story. And that’s what every journalist wants to publish, because that’s what every reader wants to hear: a good story. Little red balloon travelling 1,000 miles is a good story. In fact, it’s such a good story that it may invoke in some readers memories of a classic children’s film, “The Red Balloon.” Stories like these intrigue people, and ignite their imagination.

First United didn’t deliberately set out to create a PR coup with an apparently errant balloon, but they created a little free press for themselves out of it — the kind of feel-good story that the banking industry seldom tells but could sorely use.