In this minute-long TV spot, a member of the paparazzi stalks Alex, a celebrity, to a nursing home. The photographer snaps a series of exclusive photos capturing his prey in vulnerable intimacy, weeping over her ailing father. The announcer kicks in: “For many people integrity is as important as money. At HSBC, we understand people’s values influence their financial decisions.” Cut back to the photographer who is reviewing his photos on his computer.

He’s touched. He hits the delete button. It’s a spot that may bring a tear to your eye, all while screaming “BULLSNOT!” No one brave enough to wear the paparazzi label is throwing that kind of gift away. No way. Not ever. It’s pure gold. Not going to happen.

Servus Credit Union – “Cash In With Your Camcorder”

Servus Credit Union in Alberta Canada has just launched a new promotion called Cash In With Your Camcorder, with help from the marketing experts at Currency. Servus is asking young adults “to create a 30-second commercial that shows why the Young & Free Chequing Account rocks.” First place gets $2,000, second gets $1,000, and the winning commercial(s) may be used in future advertising. 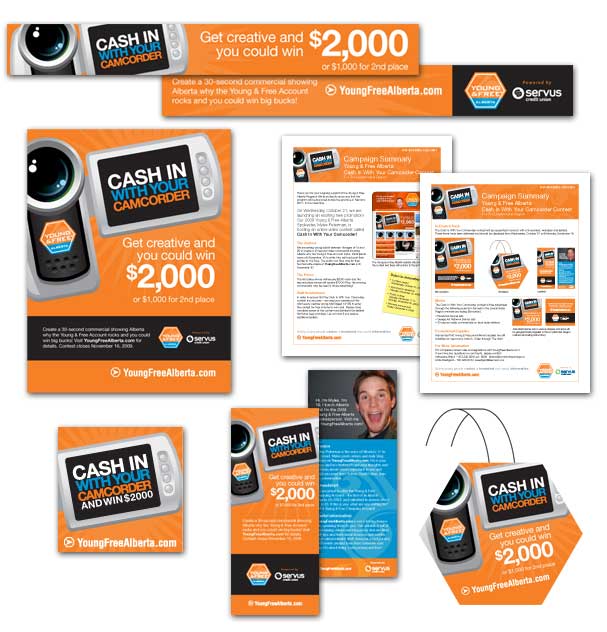 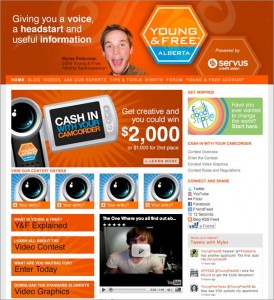 This spot clocks in at 1:30, making it an “epic.” In the spot, it seems everyone is chasing Jack, through the streets of downtown Sydney — a baker, mechanic, chef, beautician — everyone. But Jack’s death-defying feats (of stunt work) help him allude the angry mob. Who is Jack? He’s an evasive business banker. The message: “Getting hold of a small business expert at your bank shouldn’t be hard. That’s why at ANZ, we’ve put on more small business specialists.”

A romantic sperm brings flowers to woo the reluctant egg. Success!! The ad’s caption: “Doing more is in our nature.” Maybe Belgians are more apt to link “biological conception” with “banking” than Americans. Or maybe this spot from a bank in the Netherlands is just plain weird no matter where you live.

The Australian banking powerhouse asks, “Isn’t it time for some happy financial news?” The ads are invitations for people to “arrange an everyday banking review.” Even though they are intended to be parodies, they are still a little depressing. 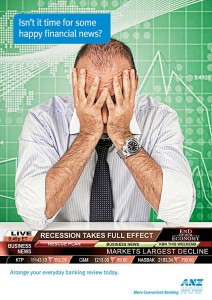 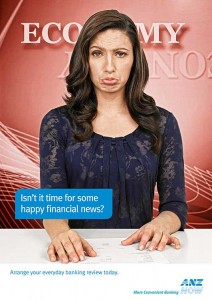 The bank recently hired Shark Communications, who is working on the following concepts. It’s interesting to see a bank’s creative work before it’s been approved and finalized for the public. You’ve gotta love the “Empower Mint.” 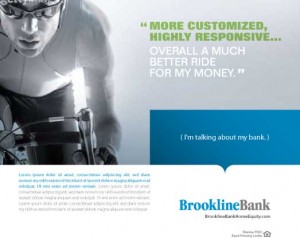 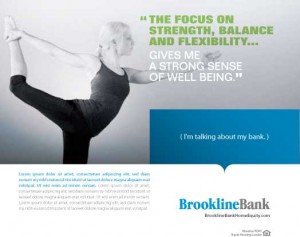 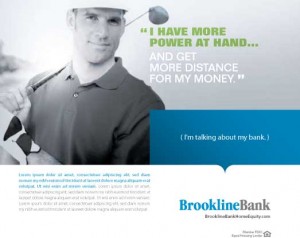 You’ve got to admire the pranksters who modified this billboard ever-so-slightly. Their handiwork is barely noticeable. “Dank” (as if you didn’t know already) is an expression frequently used by stoners for something of high quality, usually sticky, hairy, stinky, highly-potent green bud. It’s hard to classify this as vandalism when the copy revision makes an arguable improvement. More members of the target Gen-Y audience probably thought about banking at Sterling after the billboard was edited than before. 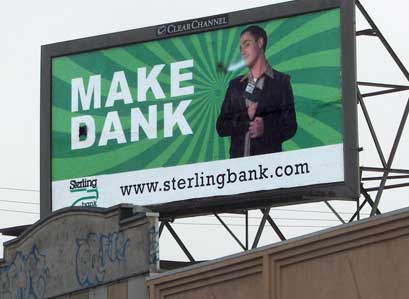 Yep, that’s a huge doob (aka “joint” or “spliff”) hanging from his lips.