ING DIRECT Italy developed this series of interactive human billboards to demonstrate the bank’s success hinged largely on customers’ word of mouth referrals. Real people were attached to billboards, posters on walls and ads on buses, striking up dialogue with passersby. In Italy, ING replaces its iconic orange ball for a pumpkin. (May 2010) 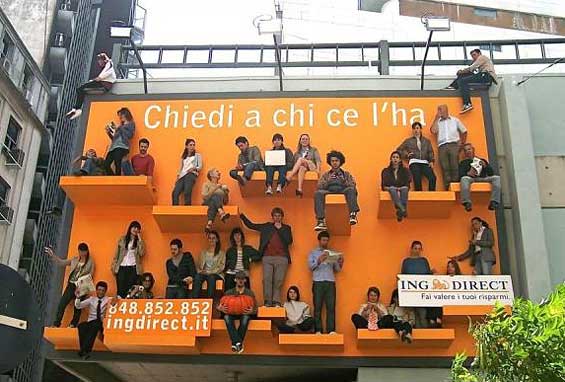 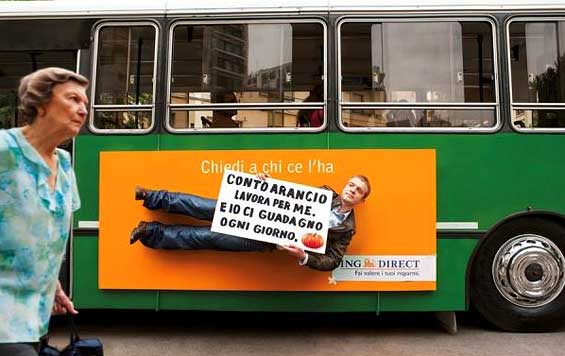 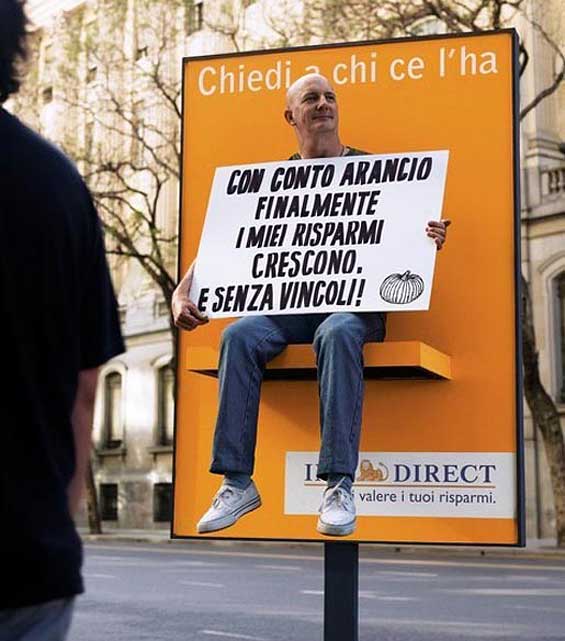 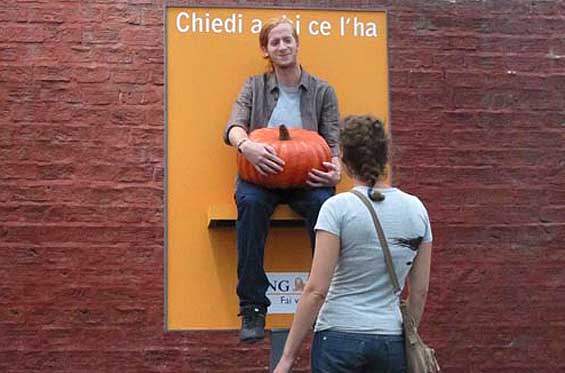 Based on a real story, a group of old men decide to revisit their motorcycling youth after one of their own passes away. Nearly two million people have watched this 3-minute epic, which goes to show you that folks will give banks their time if they have a compelling story to tell.

Bank marketing doesn’t usually make you cry…unless it’s really bad. But this will probably make you squirt a tear or two because it’s that good.

Travelers returning to Denver after a day in the mountains saw this glow-in-the-dark billboard advertising FirstBank’s 24/7 phone support. The 14‘ x 48‘ billboard uses electro-luminescent vinyl (EL) to glow in two colors, a cool green and the bank’s signature orange. Created by TDA_Boulder. (Winter 2010)

You don’t need to speak Spanish to find this bank’s video about its brand interesting and well-produced, although you have to wonder who it was made for. Some 30,000 people have already watched it.

ING takes the idea of transparency literally in this ad for its German banking arm. They printed this semi-transparent ad over the top of confusing stock quotes. Loosely translated it says, “ING DiBa and You – when you’re looking for transparency.” The tagline “Die Bank und Du” (pronounced “Dee bank unt doo”) means “The Bank and You.” (September 2010) 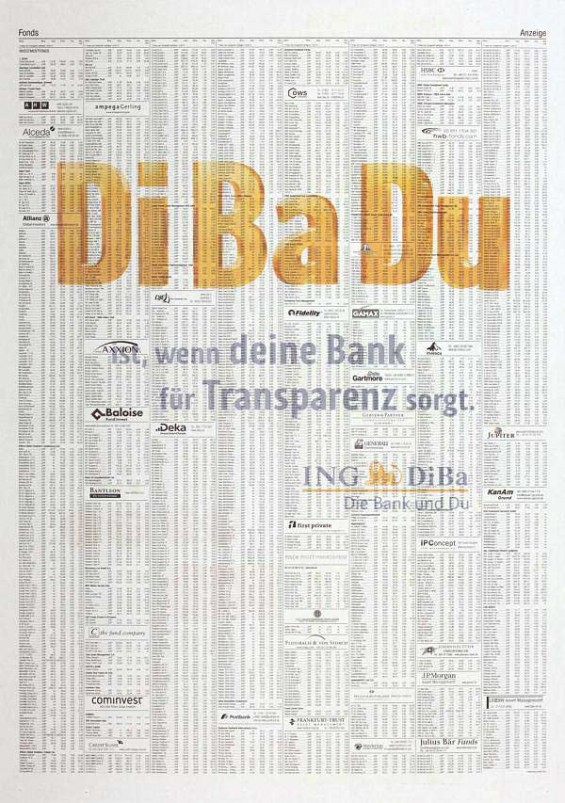 Belgian bank AXA used thousands of paint cans to create a giant QR code for this billboard. Everyone who scanned the code was taken to a mobile site where they could find out about the “Triple Advantage” home renovation loan. You can watch a short video showing how they did it here. (Fall 2010)

In a rare marketing partnership between government and a big bank, Barclays Cycle Superhighways are new bike lanes from London’s outskirts into the city’s center. Two lanes have been launched, with another two coming in summer 2011 and the remaining eight by 2015. There’s a thorough video description of the project here. (Summer 2010)

This billboard teased people with a new image for the credit union. It appeared as if a worker installing the billboard was freezing in weather that dipped as low as -40° below, when really it was just a mannequin dressed up in reflective garb. The copy reads, “We’re rolling out a new image (keep watching).” (January 2011) 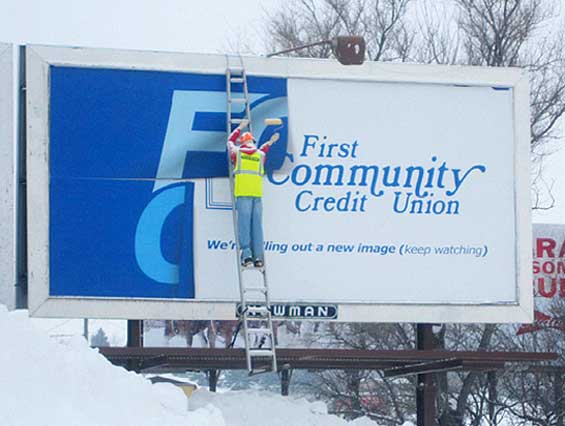 You don’t often see a bank running TV spots about their intentions to remodel its branches. BankWest serves Western Australia (WA) — that’s the left side, opposite Sydney — with over 100 locations. There’s another spot about the bank’s renovations here. (Early 2011)

The Financial Brand published this BofA ad once before, but quickly pulled it down after wondering if it was a Photoshopped prank. Nope. It’s for real. From the advertiser’s perspective, it could be seen as “a mobile banking ad honoring the Hispanic audience and embracing diversity.” Or it could be sending a message that “Mexicans are working-class nobodies who line up at taco trucks.” Either way, the guy in the ad doesn’t look too happy, and neither are many other Hispanic Americans in Southern California where the ads ran. 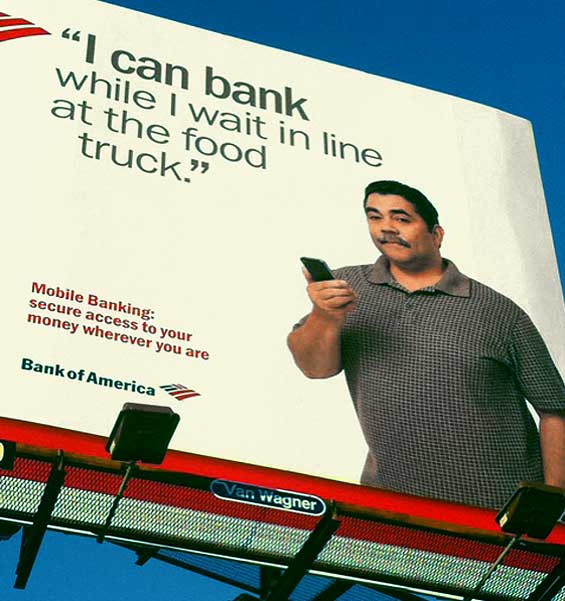 For contrast, a different version of this ad featuring a blonde Caucasian woman reads, “I can bank while I wait for my agent to call.” She’s just loafing around, looking beautiful and waiting for that next big movie contract, while the Hispanic dude has to queue up for a machaca burrito? You could call it “demographic lifestage marketing,” but others have called it racist. (2010) 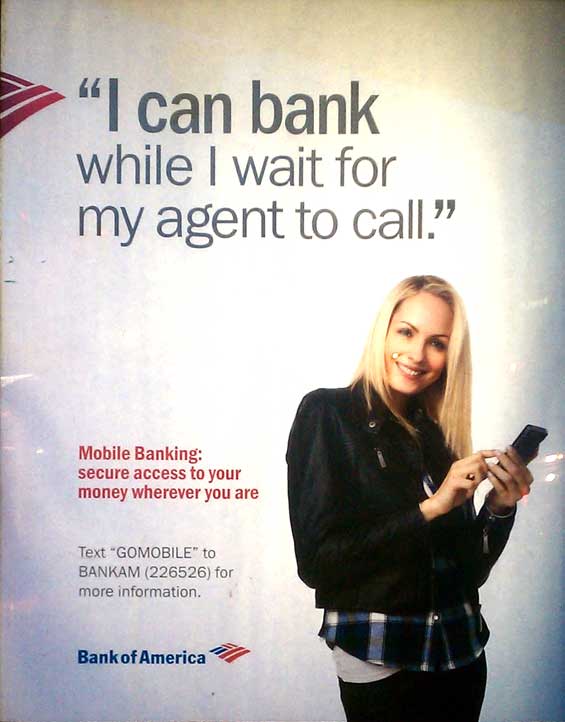 Bank of the West – A Big Deal Out of Fine Print

In an effort to differentiate its brand voice from other financial institutions, Bank of the West decided to call attention to its disclosures — the “fine print” which other banks try to tuck and hide. “Bank of the West would like to talk to you right up front about our asterisk,” starts one radio spot. The campaign targets potential customers ages 25-45 who have recently changed jobs, moved, or married, since they are the most likely to switch banks. Agency: Heat SF. (February 2011) 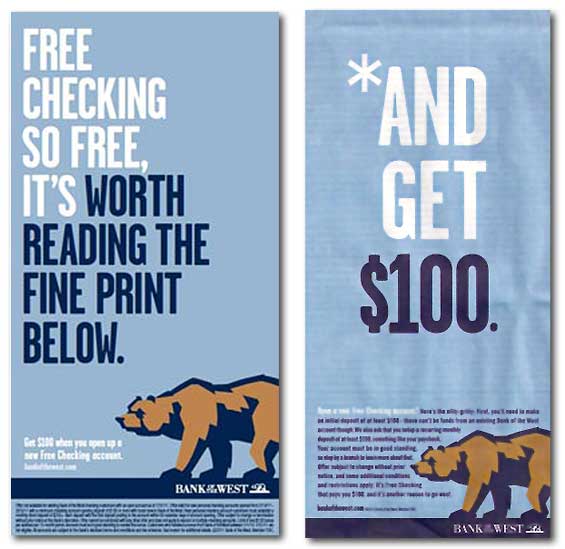 Summit Credit Union joined the ranks of other banks and credit unions to use “money trees” as a guerilla stunt. The Haunted Hustle is an annual run held around Halloween. (October 2010)

A short video that nicely captures people’s surprise and delight at finding a tree loaded with free money.

Adams National Bank was named after Abigail Adams — a quirky, unique lady, who was married to John Adams, the nation’s second President. The bank’s agency, Bra!nwave, used Abigail, a prim and proper Victorian spokeswoman, to connote the bank’s conservative approach in an attention-getting style.

Camden National’s identity has included the image of an anchor for more than 100 years, an image suggesting the bank’s coastal Maine heritage. Research conducted by Camden’s agency, Kemp Goldberg, found the metaphor of an anchor aligned with people’s perceptions of the bank — a source of support and stability. The campaign features real Mainers, and used the theme line “Everyone needs an anchor.” 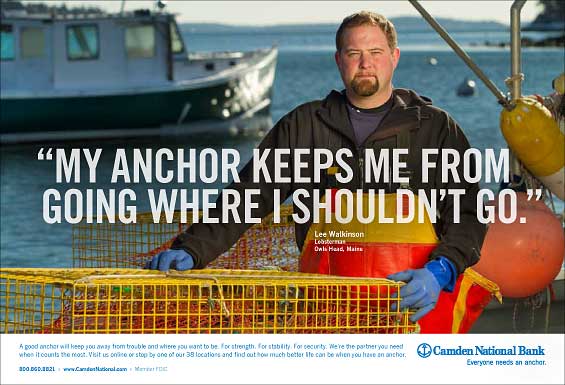 What is LifeDesign? According to the bank, they developed “this proprietary process that Financial Designers utilize to understand your specific financial circumstances and develop a custom solution that will assist you in achieving the financial goals and dreams of yourself or your business.”

“We are quite excited about this new campaign which conveys the essence of our unique LifeDesign approach,” Ed Manzi, Chairman/CEO of Fidelity Bank, said in a press release. “The messages are ones that echo what our employees communicate to our clients every day – we are here to listen and find the best financial solutions for them.” (Fall 2010) 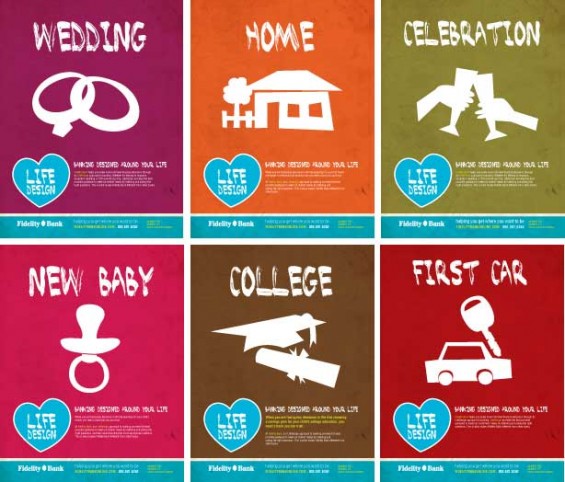 These ads are a far cry from HSBC’s advertising glory days as “The World’s Local Bank.” Did you know that 80% of life on earth is in the ocean? And that Sweden is the world’s most charitable nation? Wow… And FYI – HSBC helps the world reach its potential. 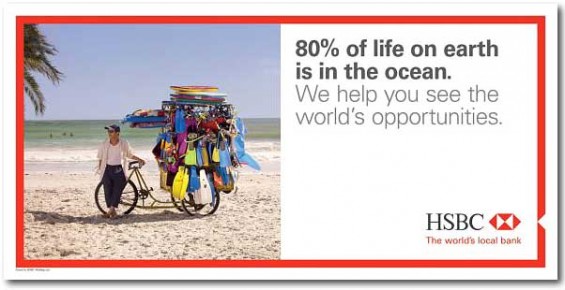 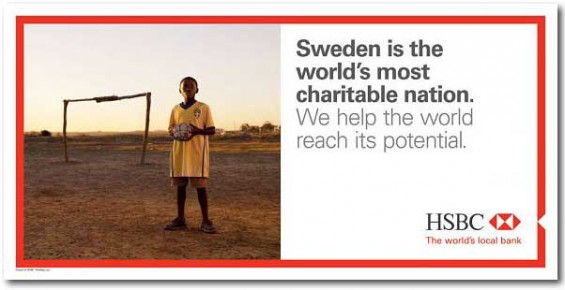 A strangely compelling yet bizarre commercial starring animated bugs. The plot is a little hard to follow, but the music is infectiously toe-tapping. The message: You get 5% cash back on purchases with RakBank Titanium credit cards.

An animated caterpillar (?) spies a female, but strikes out because he’s an unfashionable loser. A few purchases later, he’s sporting enough bling to capture her attention. But he flies away.