“I’ll be honest, there were
initial apprehensions.
But this soon gave way
to excitement.”
— Cas Scott, Companion CU
Marketing Manager

To support a new brand theme, “We’re Listening,” the members of Companion Credit Union, based in Australia, were invited to vote and pick the new logo for their organization.

Voting was open the entire month of October, and the winner was unveiled at the credit union’s Annual General Meeting on November 12th.

“The credit union is really owned by the members and therefore we decided we should invite them to actively participate in helping us decide.” said Ray O’Brien, CEO/Companion.

The old logo had a style reminiscent of the London Underground.

The winning logo maintains links back to its predecessor using color and a curvy shape.
Four icons of people join hands to create a “C” monogram cupping the name.

On its website, the credit union says the new logo represents “our members, staff, community and our partners all working together — hand-in-hand — connected as one, for the mutual benefit of us all.”

Key Question: How comfortable would you be handing a strategic brand decision like this over to the general public?

In an interview with The Financial Brand, Cas Scott, the credit union’s Marketing Manager, said “I’ll be honest, there were initial apprehensions,” Scott said. “But this soon gave way to excitement as the concept grew on our management team.”

“Many of our current members founded Companion Credit Union, so it only seemed fitting that they would be a part of our new journey and direction,” Scott added.

Option A – Opts for a dramatic square instead of a circle.

Option B – Only minor alterations to the old logo, mostly eliminating the pixels.

Option C – A combination of four people linked together.

A new slogan is the centerpiece of the credit union’s new brand positioning, featured in TV spots stressing a message of dialogue and interpersonal communication between the credit union and its membership.

According to research conducted by the credit union, Scott said the new slogan “better reflects the relationships we have with our current members, and adds-in the warmth and emotive feelings they have with us.”

The credit union’s corporate website will be re-launched in two weeks with the new logo and slogan. 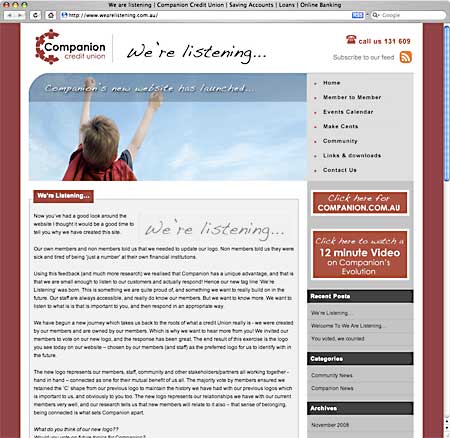 A fledgling microsite used to launch the campaign aspires to be something along the lines of a community portal/local social media hub.