Name of project: “The Bigger The Bank, The Smaller The Customer” 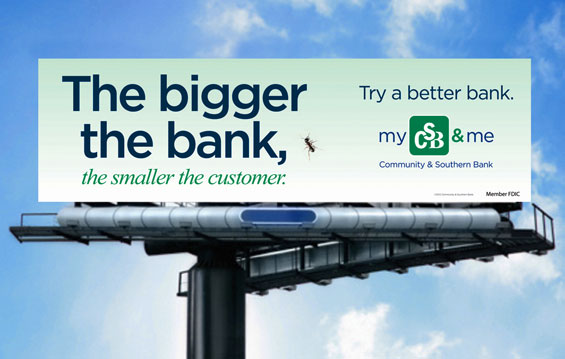 Project objective(s)? The goal was to grab prospective customers’ attention with a believable statement about customer service, giving them a good reason to choose CSB. Also, attract new accounts by reassuring prospects that if they choose CSB for its superior personal attention, they won’t be sacrificing the advanced products and services they expect from a mega bank.

Target audience(s)? People who live/work within 5 miles of each branch.

What was the basic strategy and solution behind this project? CSB versus the big banks. Community & Southern has all the services you’d expect from one of those big, out-of-state banks, like Bank of America or Wells Fargo, only in a friendlier size. And we’re local. Choose a partner who’s your partner. At CSB customers aren’t insignificant ants or pawns. They’re friends and neighbors who serve enthusiastically. Our goal is to be a trusted, reliable financial partner.

How was an ad agency utilized as part of this project? Bigelow Advertising of Atlanta, Georgia created the campaign which centered around radio as the primary medium, supported by outdoor, transit, bus shelters, and some cable TV. Also non-traditional media like gas station pump toppers and oversized branch window banners were used at new locations. A new jingle, “My CSB & Me” was created and used throughout the radio and TV campaign.

What was the most difficult part of the project? Separating our brand from its competitors in a highly crowded category. With 37 branches spread across Georgia the tallest hurdle was crafting a media plan that reduced waste. This was achieved through targeted radio utilizing nearly a dozen stations in a variety of formats. Folding in additional geographically targeted media, such as bus station shelters and billboards, along with gas station pump toppers and MARTA train station saturations increased impressions close to the branch locations. The biggest surprise was the publics’ emotional connection and debate over what creature or object featured on the creative was “the best” to visually communicate a feeling of insignificance.

How was success measured for this campaign? Community & Southern Bank is a relatively new bank in the metro Atlanta market. This campaign is their first pure branding attempt to stand out from their competition. The campaign is currently in market until the end of September 2012. With the opening of the new branches success is being measured by the number of new accounts being opened. 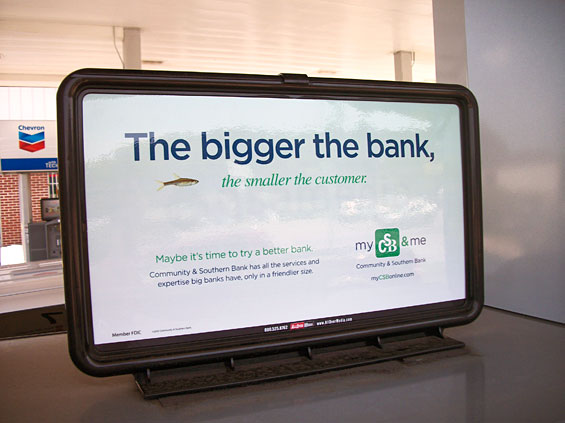 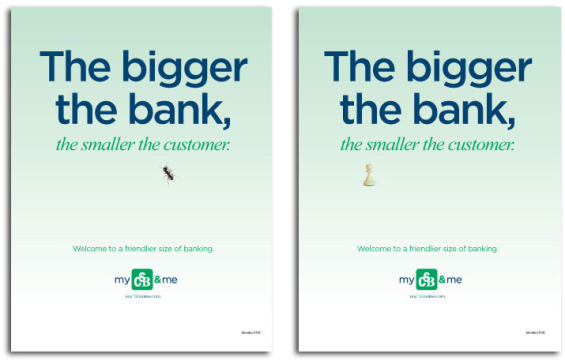 The complete series of posters in the “Small Customer” campaign. For a typographic contrast in scale, the big part of the headline reads, “The bigger the bank…” and then in small type, “the smaller the customer.” The corresponding artwork drives home the “miniscule” concept, implying big banks see customers as insignificant– small fry, ant, peanut, pawn, etc. 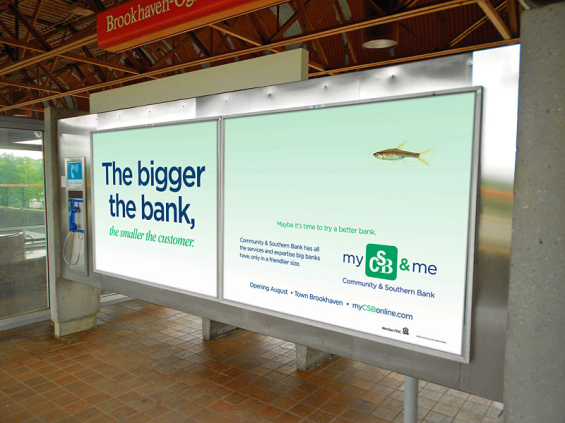 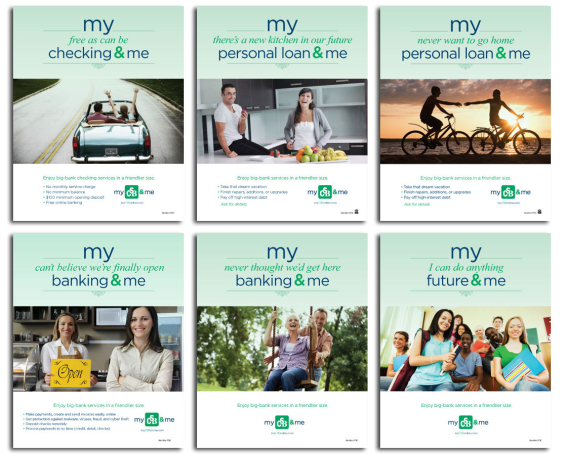 More work from Bigelow Advertising on behalf of CSB. This campaign is more retail focused (vs. brand/image, awareness).