Subscribe Now Get The Financial Brand's FREE Email Newsletter
In a YouTube video, one of the bank’s four mascots tries to smuggle a bomb into an Olympic event. The ad was intended to be an edgy expression of wry contemporary humor, but it ballooned into a PR catastrophe.
Subscribe Now!

“Commonwealth really knows how to get people talking about its ads… and not always in a good way.”
— The Financial Brand
May 30, 2012

Commonwealth Bank recently debuted a new advertising strategy built around the word “CAN.” It’s supposed to be an empowering theme about positive potential and possibilities, but the campaign has been plagued by a number of issues.

Central to Commonwealth’s new ad campaign are four mascots: people wearing costumes in the shapes of the letters C, A, N and T. Three of the letters — C, A and N — are the good guys. T is the evil spoiler, the one who turns the word “can” into “can’t.”

In the bank’s latest advertising faux pas, a one-minute YouTube video implies the evil T is trying to smuggle a bomb into an Olympic women’s volleyball event. The letters C, A and N tell a security guard that the nearby ‘T’ mascot is “sweating profusely and carrying a backpack, which is making ticking noises.” The security guard then tackles the ‘T’ to the ground.

At best, it could be considered dark humor. At worst, it could be described as an insensitive, irrelevant, immature attempt at a joke. It’s likely to make most viewers uneasy, in the same way that one feels sorry for the drunk guy at a party telling a joke no one finds funny.

Reality Check: It’s practically impossible to make fun of terrorism in an appropriate way, and even then, few people will find it humorous.

Considering the campaign is supposedly espousing an uplifting theme of empowerment, one has to wonder how Commonwealth’s marketing team could see an ad with negativity and dark overtones as something that sent the right message. Spots like the bomb hoax don’t focus on the positive aspects of “can,” but rather have the CAN mascots obsessing over ways to thwart “can’t.” Is simply defeating “can’t” the best Commonwealth thinks we “can” do?

Commonwealth ‘Has Gone Way Too Far’

Public outcry over the phony backpack bomb spot was both quick and severe. Criticism from within the financial industry has been equally stern.

Jason Bryce, writing for Banking Review Media in Australia, said the bank had “gone way too far” and calls the ad “unbelievably inappropriate.”

On July 7, 2005, suicide bombers detonated backpack bombs in a series of coordinated suicide attacks in London which targeted civilians using the public transport system during the morning rush hour. The attack, which came the day after London was announced as the venue for the 2012 Olympics, killed 52 people.

Caroline Dann agrees. “While it’s not unusual for companies to release provocative viral campaigns, the timing of this gem couldn’t be more inept,” she noted in an Australian financial publication.

“The ad really bombs,” noted the Sydney Morning Herald. “The bank should have stuck a T on CAN.”

The vast majority of comments from the general public all run in a common vein. Among the 100+ comments generated by one article alone:

Commonwealth’s CMO Andy Lark told B&T that it was “an unapproved video that got released.”

Lark declined to comment further as “it’s just not even newsworthy.”

If that’s the case, then why did hundreds of articles about the spot run online and in print publications around the world?

If it’s insignificant, then why did Commonwealth rush to pull the ad down and then apologize for it?

Like it or not, whenever a bank has to say its sorry… it’s news. Usually big news. And in this day and age, any company that is forced to pull a YouTube video had better expect journalists to come running. Add a dash of terrorism on top of the Olympics, and (with all due respect to Mr. Lark) it’s more than just newsworthy, it’s the perfect formula for a major news media hurricane.

The bank is steadfast in its refusal to explain how the spot was allowed to be made or who approved it. However, a source close to the situation told Campaign Brief the video was definitely approved by the bank, which is why Commonwealth apologized and not their agency.

“If it was unapproved and got released then Lark should quit for not having control,” said one person commenting on the situation. “If he did approve it, he should quit for being an idiot.”

Tom Ward, head of strategy and insight at George Patterson Y&R Melbourne, said the video was most likely “a case of trying to generate content that will grab enough attention to go viral.”

Reality Check: The kind of content required to “go viral” is so risky that you really have to question whether it’s worth the effort. Then again, there are positive ways in which a bank can go viral on YouTube, as this wonderful video with over four million views proves.

Not long after the ad was posted to YouTube, it was hastily turned to “Private,” effectively hiding it from public view. Too late… The damage had already been done.

So Commonwealth was forced to (reluctantly) issue this statement:

“The Commonwealth Bank apologises for the online video released to its YouTube channel. We acknowledge some concerns were raised and the material was withdrawn this morning. We’d like to apologise… This viral video was removed this morning and we have tightened our controls as a result.”

Key Questions: Does the apology feel sincere? Does it adequately acknowledge the insensitivities and issues betrayed in the spot?

In Commonwealth’s defense, they have managed to accomplish a noteworthy feat. As part of their 2012 Olympic sponsorship, the bank assembled some 1,000 Aussie fans — mostly expats living in the U.K. — to break the world record for the most people wearing the same team jersey in one place. 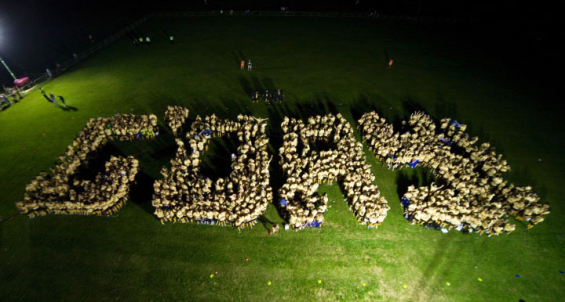 Australia has claimed the first world record of the London Olympics, without breaking a sweat on the track or in the pool. Rather, it involved a heap of Australians, nudity and a fair deal of booze.

One thousand mostly Australian expats gathered outside the Windmill Pub in London on Wednesday, setting a new record for the most people wearing the same team outfit. It more than doubled the previous record of 537 volleyball gear-wearing people in Poland in 2007.

Organizer Louisa Galligani said the event was spread purely by word of mouth, and staff estimated by the end of the night they’d turned away another 2000 people.

They were lured by the prospect of a free yellow t-shirt and dark shorts, a sausage and a soft drink. But with the pre-staging held inside the pub, local beer was flowing freely.

Guinness World Book of Records adjudicator Jack Brockbank conceded quietly that the biggest battle would be keeping the crowd stationary for the requisite 10 minutes.

The attempt, held late at night London time to make the morning television shows Down Under, took almost an hour to set up, with the crowd herded into a “G’day” shape.

But some took umbrage at the wait and took to streaking and mooning the television reporters as security tried desperately to put them back in their places.

Say what you may about Aussies (or their ads), they do possess a certain bravado you have to admire.