Citizens Bank is dumping its current tagline, “Not Your Typical Bank,” and replacing it with a new brand theme, “Good Banking is Good Citizenship.” The bank will be using the “citizenship” concept as its primary brand platform, starting with an ad blitz Citizens describes as its most comprehensive to date.

“The new corporate platform brings to life our central and long-standing belief that a bank should contribute to the growth and vibrancy of its communities, as well as the success and prosperity of its neighbors,” Citizens said in a statement.

“We believe that banks have obligations and responsibilities to the communities they serve,” the bank says on its website. “Banks allow citizens to invest in other citizens, and in the businesses those citizens create.”

This campaign builds on a previous concept where Citizens used the “citizenship” theme. In an earlier campaign, Citizens marketing talked about “one good citizen helping another.”

In the current campaign’s media mix, Citizens has two TV spots, one titled “Townhall” and the other “Lending” that can be seen at the bank’s website. (You can find and view another pair of spots in the video player below.)

Citizens Bank wrote a manifesto explaining what good citizenship means for a bank.

“We have gone through an extraordinary period in our nation’s history. But what lessons have we learned along the way?” the bank muses. The answer: “Banks have obligations and responsibilities to the communities they serve.”

“Good banks allow citizens to invest in other citizens,” the bank asserts. “One man’s savings is another woman’s mortgage. One man’s investment is a new factory or day care center. A good bank lies at the center of it all…” 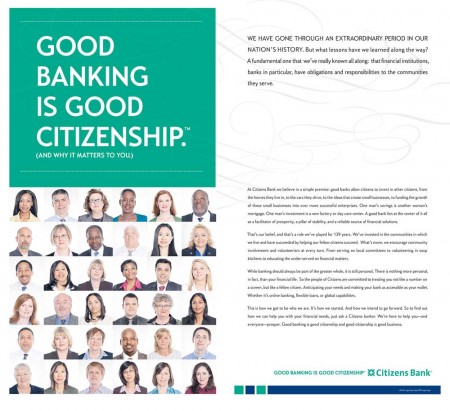 CITIZENS BANK MANIFESTO
The bank prepared this document to explain its philosophy of banking citizenship.

In the second spot, “Lending,” Alexander Hamilton tours Citizens’ headquarters. He asks everyone what they are doing, but no one is banking. “I’m cleaning up a neighborhood,” says one employee. “I’m handing out toys for tots,” says another.

Citizens says its employees have volunteered 570,000 hours of their time in the past three years. In 2009, their time was divided between 3,000 different community organizations.

Citizens also cites its CollegeSaver accounts as evidence of its banking citizenship.

In an interview with Adweek, Scott Morgan, whose ad agency works with the American Bankers Association, wondered if Citizens — a multi-billion-dollar bank — can “really deliver that level of ‘citizenry?’” They run the risk of “being construed as another big bank trying to look small and community-focused,” he said.

Ron Shevlin, a senior analyst with Aite, shares Morgan’s concerns. “Advertising that tries to increase consumer trust in a banking brand is doomed to fail,” Shelvin said. “Trust is a multi-dimensional construct, of which perceptions — which might be influenced by advertising — is just a small part.”

“Consumers’ trust in banks comes from their experiences with the bank — how they experience the banks’ attempts to manage and grow the relationship, the bank’s policies and procedures, and the banks’ ability to provide high quality service and products,” Shevlin added.

The campaign is the work of Citizens’ ad agency, Ogilvy & Mather, New York.

Citizens, headquartered in Providence, Rhode Island, has $144 billion in assets, more than 1,500 branches, approximately 3,500 ATMs and around 22,700 employees. The bank spends about $20 million annually on ads. 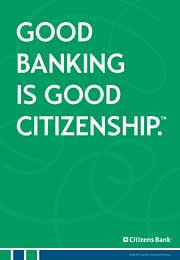 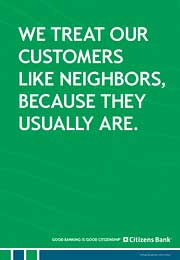 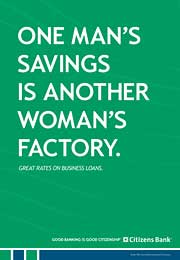