Subscribe Now Get The Financial Brand's FREE Email Newsletter
Black Friday isn't the starting point of holiday season anymore. Financial marketers increasingly must consider early-bird buyers who need credit to complete their holiday shopping. A re-think of holiday marketing imagery may also be in order, now that 'me' is the #3 person on many people's shopping lists.

The answers are particularly important as competition for consumer credit comes from more directions than ever. A visit to the website of online point-of-sale lender Affirm, for example, shows how many brands popular with younger generations have partnered with this nonbank, nontraditional lender. In early 2019 Affirm announced a partnership with Walmart to offer its payment plans both at its stores and through Walmart.com. 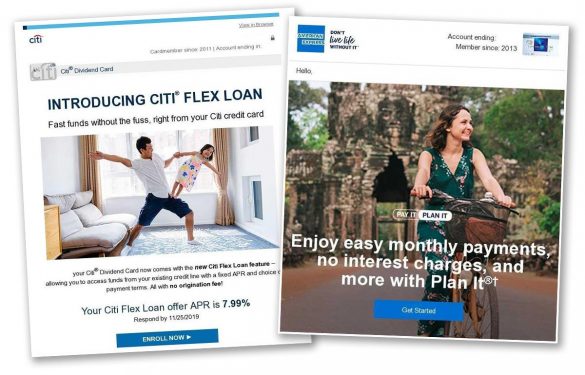 Fintech pick-your-repayment-plan lenders like Affirm are up against a growing number of rival efforts by traditional card issuers like Citibank and American Express. All may find more usage during the holiday season.

Then there are partnerships between credit companies and retailers, such as the Amazon credit cards offered by the retailer in conjunction with JPMorgan Chase and Synchrony. These include secured-card variations introduced in 2019, believed to be an effort by Amazon to move further down the credit hierarchy.

Here’s a fundamental query: When does the holiday shopping period begin? You might think the official beginning is Black Friday, the day after Thanksgiving, when many retailers start holiday sales and promotions.

The starting line, though, has moved earlier. Multiple studies indicate that consumers start their holiday shopping efforts — and likely their initial thinking about how they are going to pay for it — earlier and earlier. Some may still be wearing flip flops when making decisions regarding holidays that traditionally identified with the snowy season.

“The holiday season is beginning earlier than ever, with most consumers having started their holiday shopping efforts by September,” says OpenX in its “Consumer Holiday Shopping Report,” compiled by The Harris Poll. “Marketers traditionally plan holiday media buys over the summer, and, increasingly, consumers are now starting to plan at the same time.” ROI Revolution’s holiday marketing study indicates that about half of marketers surveyed plan to launch their holiday campaigns before Halloween.

The OpenX report indicates that, somewhat incredibly, 50% of consumers surveyed indicate that they begin things in September, or even earlier. Labor Day Weekend used to be considered the end of summer and Christmas was far away. But now, many consumers seem to be hitting the fast forward button.

Reality Check: Other studies indicate that a certain amount of that planning and intentions to get the holiday shopping done early reflect wishful thinking, and that many American shoppers actually do a lot of procrastinating. Still, Black Friday no longer serves as the only milestone.

But Yes Marketing notes other milestone days gaining recognition. One is “Super Saturday,” coming to be the slow-poke’s Black Friday. This is the last Saturday before Christmas and includes not only in-store purchases but online pickups made near the wire. Another milestone is “Green Monday,” the second Monday in December and the last day to be able to order online with standard shipping and still be able to count on delivery before Christmas. Both of these lesser-known days entail lots of credit purchase.

Takeaway: With Black Friday occurring closer to Christmas in 2019, some say this argues in favor of starting holiday promotions early. October isn’t considered too early by those who recommend going after the holiday early birds.

How Jolly Will This Holiday Season Be (Whenever It Starts)?

Predictions about holiday spending for 2019 are generally positive, though some potential spoilers are in the wind. (The chart below indicates a very upbeat season, with Millennials potentially accounting for a great deal of growth in spending.) AlixPartners suggests that U.S. holiday spending could rise by 4.4% to 5.3%, considered a much healthier increase over last year’s “tepid growth of 2.3%.” 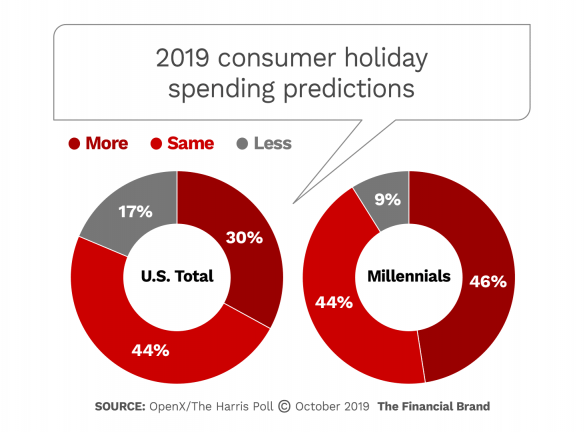 AlixPartners and others point out that consumer confidence has been rattled somewhat by trade issues and recession worries, and how spending actually turns out is a big question. A report by Wells Fargo Securities, for example, notes that some federal tariffs have been delayed until December, which may lead consumers to buy certain goods earlier than the traditional holiday period.

On top of all this, there is Amazon’s Prime Day, in July, which has become a huge international event, tied into by banks and credit unions. Seeing how things were going, other retailers have introduced their own anti-Prime Day sales events, frequently tying in financial institution credit programs.

Amazon’s Prime Day results for 2019 outdid Black Friday and Cyber Monday sales combined. A.T. Kearney’s “Prime Day 2019” survey found, however, that the created “holiday” has not become a rival to the gift-giving season, as huge as it is, because most Prime Day shoppers are either treating themselves to something at a great price or they are stocking up on things they would buy anyway — even staple items.

A.T. Kearney found that only 8% of consumers surveyed said that they buy presents for others on Prime Day. So the spirit of holiday time giving remains intact.

More than one study of holiday season trends finds that “me” is one of the key loved ones on consumers’ holiday gift lists. The OpenX survey ranked holiday shopping for oneself as the #3 goal, behind only one’s children and one’s partner. “Me” came in ahead of relatives, parents, friends, pets, and co-workers — and spending on “me” is projected to rise 70%. The research finds that dads plan to spend more on themselves than other categories, leading the study team to dub them “sELFish shoppers.”

Looking at Generations and Genders at Holiday Time

The timing of holiday shopping also has a generational component.

While in some studies Generation Z (born between 1995 and 2015 roughly) shows some resistance to buying things, research by Shopkick finds that they will be a strong element of Black Friday sales. Interestingly, Shopkick’s consumer survey found that 74% of Gen Z plans to shop on the traditional Christmas season start of black Friday, while 68% of Millennials plan to shop on Cyber Monday. OpenX’s study suggests that Baby Boomers will split their shopping half and half between online and stores.

Key point: $1 out of every $5 spent for holiday shopping will occur on a mobile device.

An interesting wrinkle is the role of gender in holiday shopping. OpenX finds that 78% of moms claim to be the primary holiday shopper for their households. Only 42% of fathers make that claim.

A survey by daVinci Payments indicates that among women 18 and over, 69% are Amazon Prime members which is far ahead of projections made in early 2019 that just over half of American households would have Prime accounts. 21% of the women surveyed said they will do half or more of their holiday shopping during the Black Friday/Cyber Monday period and that 46% will do 25% or more of their shopping in that space.

Getting Credit Messages to Consumers for Holiday Spending

One safe bet is that traditional television will not be a good way to reach as many consumers with a credit-oriented message as might have been the case in the past. With cable cutting so common now, one in four consumers don’t have a cable TV connection.

A study by Comperemedia, a Mintel company, found that, based on patterns seen in 2018, several strategies make sense. The research looked especially at direct mail and email experiences. 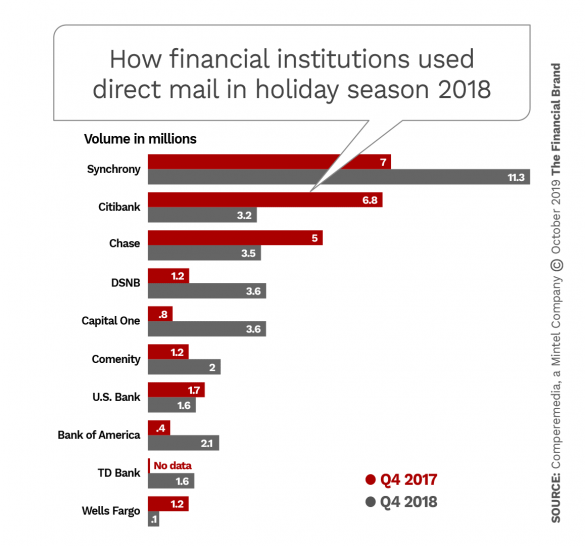 1. Get out in front of the pack with messaging before November begins. This can improve the read rate for messages sent versus later in the holiday season. This applies to both email and direct mail promotions.

“Send timely offers to early bird shoppers,” the report advises. “… holiday offers are well received in October, but after that, email recipients grow weary of an offer overflow.” 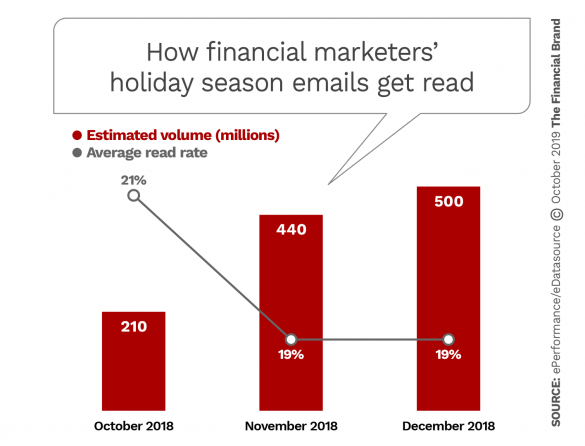 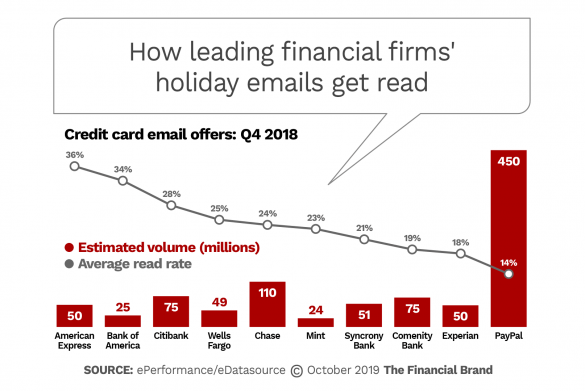 2. Use loyalty-based communication to appeal to current customers. The authors’ say this is a goodwill play — in a season intended to be about goodwill.