“Our website is temporarily unavailable. Please try again later.” Nine words that consumers dread almost more than IT departments. And yet no financial institution is immune from a catastrophic website failure, not even a mutli-trillion dollar bank like Chase.

The site crashed sometime in the evening of Monday, September 13, night and stayed down all day Tuesday. By Wednesday evening, a Chase spokesman said service had been restored, but the website pooped out again.

The outage affected around 16.5 million customers, including more than 3.7 million households that use chase.com to pay their bills.

It took Chase quite a while to figure out what caused the outage. They were at least able to rule out an online attack. Chase now suspects a software error caused by a third-party database company that corrupted information in the bank’s systems and preventing customer log-ins.

If it took Chase a long time to determine what caused this nasty site crash, it took them even longer to start telling customers what was going on. When the site first went down, did Chase ignore early opportunities to communicate, assuming that they could solve the problem quickly? Or were they caught completely off guard?

In the absence of any kind of statement from Chase, rumors quickly circulated that chase.com had been hacked and that thousands of customers were soon to be defrauded of millions of dollars.

When Chase finally got its act together and decided it need to tell customers something, the site had already been down for nearly two full days. Online banking users were told that the site was down for “scheduled maintenance?” Over 48 hours later and this is the best they can come up with? Maybe they thought saying something — even a lie — was better than nothing?

Many customers vented their frustrations on Twitter. They weren’t just upset that they couldn’t manage their finances, nor were they simply worried that Nigerians were draining their accounts. They were shocked not just that a website outage of this magnitude could ambush a bank this size, they were dumfounded by the near total absence of customer communications. 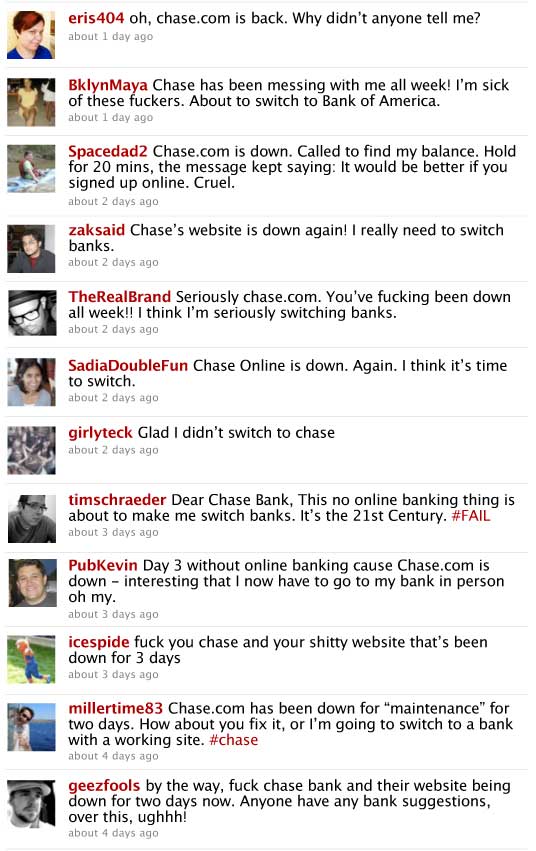 One person noted that Chase may be too big to fail, but its website apparently isn’t. Another person wryly theorized that the chase.com failure was actually part of a viral marketing stunt to drive awareness of branches and tellers. Funny. Most everyone else, however, didn’t find any humor in the situation, spewing piss and vinegar all over the internet instead of jests.

What We Have Here Is A Failure To Communicate

The blogger behind Chase-Sucks.org was predictably critical of the bank’s bumbles and bungles. “During the outage, the very limited information they released did not indicate anything about the nature of the problem, how people might be ultimately affected, and how long the problem might last,” he wrote. 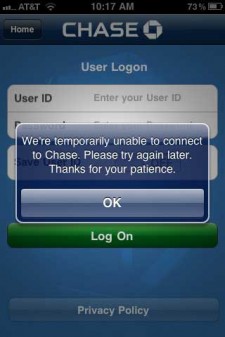 “When problems reappeared on Wednesday, they were very slow to acknowledge them,” the blogger added.

“First of all, they tried to pass it off as ‘scheduled maintenance’ in the middle of the day,” he said. “Then they didn’t officially acknowledge the problem, other than the notice on their site.”

“They were tardy in pulling the ‘scheduled maintenance’ excuse down,” added Jim Bruene at NetBanker in a blog post.

Chase later admitted it didn’t want to post any kind of update because it was waiting until it had a full understanding of the technical problems.

Reality Check: In this day and age, it could take you a week or more to debug a major site malfunction. Heck, authorities still don’t even know what caused the May 2010 “flash crash.” Customers aren’t willing to wait 5 minutes, much less 5 days. Taking a “wait-and-see” approach to crisis communications is the abolute worst thing you can do. If you don’t know what to say because you don’t yet have the answers, then it’s better to fess up and tell customers the truth than leave them in the dark. Fear festers in an information vacuum.

“The lack of communication left a void,” noted Gartner banking analyst Stessa Cohen “Instead of hearing about the outage directly from Chase, customers read about it on Twitter.”

“The information void was left to be filled with tweets and blog-post speculation.”
Bruene added. “All in all, a bad day for Chase online banking. But a good learning opportunity for everyone else.”

It’s time to dust off and revisit The Financial Brand’s basic 6-point guide to crisis communications. First published in April 2009, “How to Handle an Ugly PR Mess” outlines six simple steps to dealing with PR during a crisis:

1. Put yourself in the consumer’s shoes and work backwards. 80% of crises can be managed favorably this way. Chase reacted from the predictable corporate perspective, not the customers’ point-of-view, so they score a D grade here.

2. Respond in real time. You can’t afford to call “time out” while devising your plan. Get the facts out stat. After taking 2-3 days to issue any kind of statement, Chase clearly gets an F here.

3. Be proactive. If you play defense, you’ll spend all your time on your heels. Chase, who is trying to dump blame on a third-party vendor, gets a D.

4. Tell the truth. Don’t spin. It will spiral out of control. And the truth always comes out anyway. Chase probably didn’t mean to lie when it told customers the site was down for scheduled maintenance, but everyone knew it wasn’t true. It took way too long to get the truth out, so Chase scores a D.

5. Offer a sincere apology. Anytime you inconvenience a customer, you need to be saying you’re sorry early and often. Some of the customer-facing messages issued by Chase, such as the curt announcement shown on the right, lack this common courtesy. When Chase did apologize, the tone was corporate and seemed to reflect the bank’s frustrations more than empathetic feelings. D+.

6. Use the web. Your critics will. When your brand is in crisis, there will be a conversation online somewhere. You’ve just got to find it. Jump online, check out Twitter and see what bloggers are saying about you, because that’s exactly what consumers will be doing. Chase had a million middle fingers flung at them…and yet the bank still doesn’t even have a Twitter account. D-.

In the midst of the crisis, Jacob Jegher at Celent suggested Chase “should be using social media to give customers a better idea of what is going on.”

“Chase clearly has a list of every online customer’s email,” one person commented on the NY Times blog post. “They should send out an email to customers apologizing, explaining the problem, and offering some sort of token for the inconvienence.”

“Plan for customer questions and concerns at all channels and destinations, whether at the branch, drive-up window, ATM, telephone banking, contact center,” advises Gartner’s Stessa Cohen.

As problems with Chase and its website persist, the bank desperately needs to keep employees in the loop. “All Chase employees need to be aprised of the situation in order to save the company’s reputation,” wrote Sarah Shepherd on her blog.

“I went to the branch and they were clueless,” Stephen Deerhake complained on Twitter.

The critic at Chase-Sucks.org sums it this way: “In short, this outage has been a complete communication failure for Chase.”

Key Question: What about you? Are you prepared for when your website goes down? 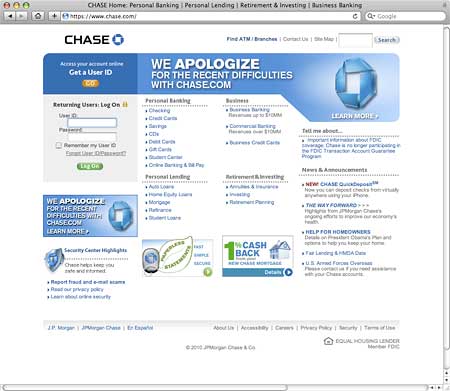