Subscribe Now Get The Financial Brand's FREE Email Newsletter
Credit unions in California are not “open to everyone.” Regulators have issued a stern warning, forbidding credit unions from using statements like “anyone can join” in their marketing communications.

The California Department of Financial Institutions (DFI) has told credit unions they are prohibited from running advertisements state that “everyone can join” or “all individuals can join.”

The DFI describes the use of such statements as “impermissible advertising.”

“Advertisements that display this message violate the Commissioner’s regulation concerning common-bond requirements for field of membership,” the DFI explained in its April monthly bulletin.

“Stating that ‘everyone can join’ or that ‘all can join’ the credit union incorrectly suggests that the common-bond requirement of § 30.51 does not apply,” notes the DFI.

Translation: “Just because you have a community charter does not mean you are open to the public.”

The California regulatory body says it first became aware of the issue when one of its employees spotted a window display. 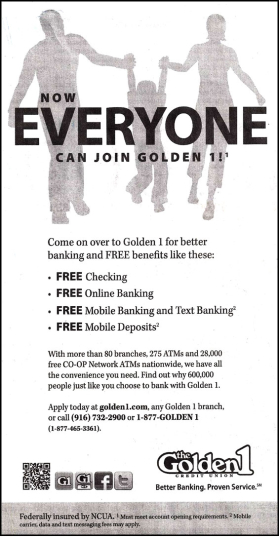 An advertisement in the Sacramento Bee from Golden 1 Credit Union with the headline “Now Everyone Can Join Golden 1!” A disclaimer at the bottom of the ad reads, “Must meet account opening requirements.”

California’s DFI didn’t specify which media channels the language restriction applied to — presumably all of them. If that’s the case, some credit unions in California will have to make big adjustments to how they market membership.

NuVision FCU ($1.2 billion, 80,000 members) in Huntington Beach is one such credit union. On the membership page at their website, the headline at the top asks, “Am I eligible?”

“Yes you are!” reads the next line.

NuVision has exploited what bankers decry as a “membership loophole” in the way credit unions liberally apply the “common bond” requirement. If someone doesn’t work for one of NuVision’s select employer groups, they can join the American Consumer Council. By “joining” the American Consumer Council, “anyone can become a member” at NuVision, at least technically speaking.

“If you do not qualify, no problem! At the same time we open your membership at NuVision, we will enroll you in the American Consumer Council (ACC) at no initial cost to you,” the credit union says on its website. “NuVision handles everything so you can start earning the benefits of NuVision membership right away.”

Many credit unions across the country leverage this “association through association” strategy. It’s been a powerful and effective tool to help batter down consumer perceptions that financial cooperatives are private, exclusive “unions.”

Californians can join Western FCU by also simultaneously becoming a member of the Surfrider Foundation.

PremierAmerica Credit Union in Chatsworth, California, similarly promises that “Membership is for Everyone!” thanks to an affiliation with the Alliance for the Advancement of Arts & Education (an organization for which no website seems to exist).

On the website for Patelco Credit Union, another California credit union, it says, “Rest assured, if you are reading this and you have your primary residence in the United States, you can become a Patelco member.”

Pacific Resource Credit Union says “membership is also open to any member of the Central City Police Boosters, and we can help you set up your Boosters membership. It’s easy and free.”

Ever since the introduction of community charters, credit unions have skirted the edges of the “common bond” requirement. There have been hundreds (if not thousands) of examples of credit unions reassuring all those in earshot that “membership is open to everyone.” Ads have carried the words “anyone can join” for at least a decade.

But credit unions take heed: Now that bankers see an opportunity to restrict union marketing messages in a way that curbs growth, you can be sure they will be pressing the issue hard in every state from coast to coast. Credit unions in other parts of the U.S. shouldn’t be surprised if their regulator soon follows in California’s footsteps. If bankers get their way, they’ll kibosh “open to anyone” for everyone in the credit union industry.