Subscribe Now Get The Financial Brand's FREE Email Newsletter
Winning the attention and loyalty of today’s disengaged banking consumers is no simple task. While most financial institutions continue to rely on old marketing strategies to grow, there are lessons we can learn from the sports marketing industry, where even gym sneakers and soda pop have been transformed into high-priced symbols of brand loyalty.

In the fight to regain consumer trust and win new customers, the marketing strategies of today’s financial institutions seem to be splitting into two popular camps. There are the “Shouters” and the “Rebirthers.” Both approaches can claim some degree of success, but there are questions that need to be addressed before you should choose either of these two options… or perhaps a better alternative.

With diminishing engagement across diminishing touchpoints, it’s no wonder that Capital One, a globally diversified bank known predominantly for their credit cards, would employ the services of charismatic actor Samuel L. Jackson to help pitch their services. Thanks to Jackson’s award winning portrayal of the cool but cruel hit man Jules Winnfield in Quentin Tarantino’s classic film Pulp Fiction, we can’t help but immediately react to his on-screen persona. Like Pavlov’s dinner bell, consumers’ dog-like consumer response to Jackson’s image subconsciously triggers memories of Ezekiel 25:17 in our collective memories of him waving a 9mm pistol around while yelling at us to do what he says.

So, when he fixes his gaze on the camera and confrontationally asks, “What’s in your wallet?” (Capital One’s tagline), some consumers obediently comply and apply for their Capital One credit card.

You can’t blame Mr. Jackson, Capital One or Quentin Tarantino for any of this. This is how advertising has worked, continues to work, and will always work for as long as there are companies who find it necessary to scream and shout at prospective consumers. Because screaming and yelling will be effective with those consumers don’t mind screaming and respond to shouting.

But what about everyone else?

Umpqua Bank in Oregon is the poster-child of bank rebranding. In ten short years, what began as a single “store” concept grew rapidly through expansion, acquisitions and mergers to what is now a regional powerhouse with 65 locations in three states — over $3 billion in total assets, and $600 million in market capitalization. Today they’re worth about $2 billion, but they’re still growing, taking more and more market share from the big guys and acquiring other smaller regional banks in Northern California and elsewhere. A massive success story by all accounts, but also a rather expensive endeavor; every single branch location needed to be redesigned and reconfigured, along with their entire hiring and training infrastructure.

And so, on the one end there’s shouting at consumers, and on the other, spending millions of dollars retooling your entire organization over the course of a decade. Is there anything that can be done effectively and authentically that falls somewhere in between? 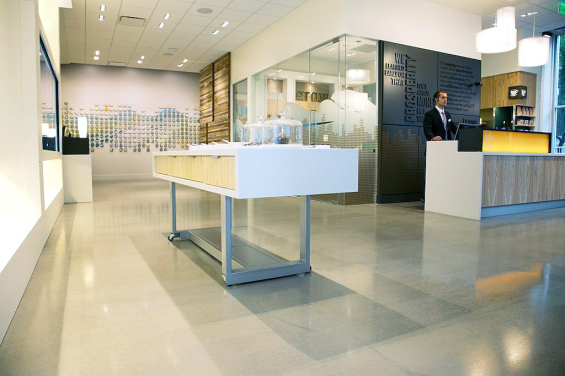 ATB Financial started out as Alberta Treasury Branch a government agency in the province of Alberta, Canada during the Great Depression. Its initial objective was to respond to the banking needs of Albertans that weren’t being met by the big national banks based in Toronto. Today, ATB is a highly diversified financial institution with four areas of expertise — retail, corporate, business and agriculture, and investments — with 171 branch locations, over 3,200 employees and net profits of over $300 million.

In August of 2013, ATB set out with the goal to turn the historic bank into an enduring brand. Their primary objective: to position themselves for future growth in the key markets of Edmonton and Calgary. To be successful, it was imperative that they first identify their brand’s core attributes in order to articulate a brand-position that would be simple, differentiated and relevant to their audience.

During the discovery phase of the project — over the course of 220 man-hours — ATB’s branding team interviewed more than three-dozen stakeholders and amassed more than 30 hours of interviews. Out of that deep dive, a clear set of values and strengths emerged, which were then used to extrapolate and hone the core attributes of the organization. From this, the branding team crafted a positioning platform that is fertile and evergreen enough to carry the bank to their long-term strategic vision.

Coincidentally, the process ATB’s used was basically the same process that used at Nike.

The process of creating the Jordan Brand, for example, began with the gathering of information. Branding experts were tasked with the responsibility of talking to the sponsored athletes, shoe designers, the marketing team and other stakeholders. They reviewed consumer focus group data to get the complete story behind this particular Nike product. Those key attributes and proof points were then translated into meaningful expressions that would be both authentic to the original intent of Nike and, at the same time, capture consumers’ interest.

This may seem obvious, but is in fact the exact opposite of how many branding projects are conducted. In typical scenarios, the branding team would begin with perceptions of the consumer and then work their way back from there to the company. But this doesn’t work for Nike and the Air Jordan brand, and it doesn’t always work for financial institutions either. It’s extremely difficult — sometimes impossible — to reverse engineer a solution straight from consumer insights, trying build your way back to a brand position.

At Nike, things are often done the right way — the hard way — because they found the net result to be a deeper and more meaningful engagement with their target audience. It means finding brand ambassadors based on alignment of values and aspirations instead of consumer insights alone.

This same strategy for brand development, honed by sports companies like Adidas and Nike has proven to be just as applicable to the banking industry. With ATB, the branding process began with an immersion into the brand, mining the sentiments of key stakeholders and identifying core attributes that are truly reflective of the organization and its brand. From there, a simple, differentiated, and relevant position emerged.

Today, it’s critical that you take a position, and not merely have ‘a positioning.’ Every organization has the potential to do this, to find core attributes that can connect with and engage modern consumers. You don’t have to yell, nor do you have to redesign all your branches from the ground up. Just like ATB, you could be armed with a clearly-articulated vision that flows directly from your authentic heritage while also linking to your future aspirations.