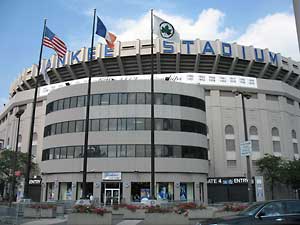 Such astronomical sponsorships are increasingly becoming the norm among financial institutions. Recently, Barclay’s also climbed into the stadium sponsorship stratosphere with its $400 million, 20-year deal for the New Jersey Nets stadium.

Key Fact: Citi and Barclay’s have lost billions of dollars in the last year. B of A, on the other hand, has continued posting positive net income into the billions over the last three consecutive quarters — arguably one of the toughest periods ever for financial institutions.

Even if you view such sponsorships as an unnecessary extravagance, at least B of A’s sponsorship of the Yankees would be on-brand for the bank. After years of floundering around with an implausible service promise, “Higher Standards,” Bank of America is now embracing its patriotic name and building a brand around all things American. Among the bank’s other sponsorships:

The Panthers don’t really fit B of A’s portfolio, but the bank is “buying love” in its own backyard, Charolette, North Carolina, where the bank is based.

Reality Check: These sponsorships aren’t just about the branding and marketing opportunities they create. There’s also the personal motivations of executives who want luxury boxes at America’s prestige sports venues. Often, the rationalization goes something like this: “We can use those skyboxes to close big, important deals.”

At least in B of A’s case, they are maximizing their sponsorships through affinity products and services, such as debit cards featuring people’s favorite sport’s icons.