Bank of America recently introduced a new offer to New Yorkers. For every $100 they spend on public transit with their BofA bank cards, Bank of America will pay them $10. Sounds like a great deal, right — something New Yorkers would be thankful for? After all, the deal comes without any real strings attached.

But not all New Yorkers are thrilled about the promotion. Some find the transit ads the bank used to launch the campaign insulting.

Perhaps it has something to do with the ads’ snarky tone, which seems to mock the value of the offer while drawing on a New York stereotype of the city’s residents as whiny complainers.

As one ad says, “Ten bucks for every hundred I spend on transit? Great. How about a solution for gridlock?” Or to paraphrase the interpretation of one New Yorker, who published a comment online about the campaign: “Thanks for the paltry ten bucks back, asshole. Now how about fixing the real problem?”

The feedback on one website, Gothamist, has been far from enthusiastic. Commenters refer to the campaign as “mesmerizingly annoying” and “pander-tastic!” At NBC-NY’s website said, “Whomever thought up this campaign can’t stand New Yorkers.” 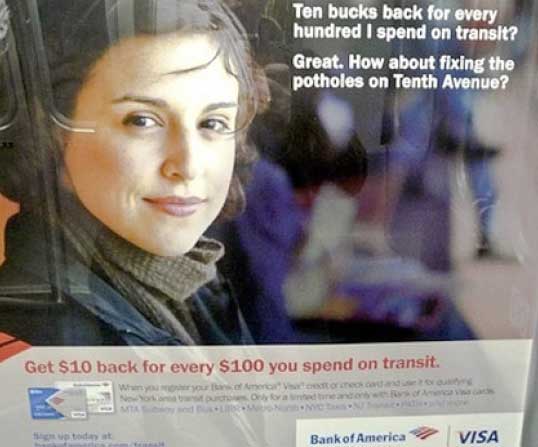 More than one person felt the ads were the work of non-native New Yorkers. “They seem to be written by someone who doesn’t actually live here. How many people really, truly give a shit about potholes on 10th Avenue?” To which someone else replied, “Who goes to 10th Avenue?”

Another person said wryly, “They’ll surely sell lots of their services to fictional New Yorkers as played by Hollywood actors.”

At least one commenter saw value in the campaign. “It’s gotten me thinking about it, which is the whole point.” 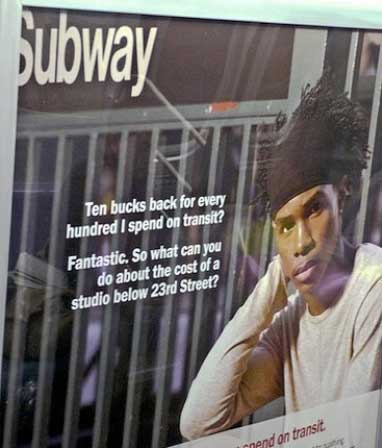