It’s become an annual tradition: millions of holiday bargain hunters hit stores and online retailers looking for deals as part of a post-Thanksgiving consumer bacchanal. But while shoppers sought outlets to dump their hard-earned cash, ING DIRECT was trying to help them put more money in their pockets with ways to save, not spend. 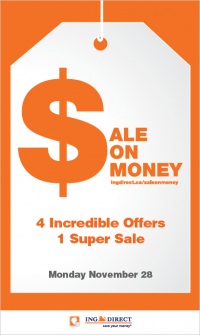 In Canada, ING DIRECT had four separate one-day offers on some of its signature branded products:

These deals were available for 24-hours on Cyber Monday only. Customers could take advantage of the offers on ING’s website or over the phone.

A microsite used for the campaign was already unavailable as of Tuesday morning. There’s no obvious reason a site like this couldn’t be up all year, even after the deals are removed. ING could create a reusable URL — something like ingdirect.ca/cybermonday — that could become part of consumers’ seasonal shopping bookmarks.

The bank also used social media channels to push the promotion. ING has over 4,000 followers on Twitter, and more than 15,000 fans on Facebook, putting it among the top most-active financial institutions globally in the social media space.

ING DIRECT cafes played a minor role in the campaign, with only a limited amount of printed material distributed at each location. Of course, there isn’t much point in producing a mountain of offline promotional pieces for a sale that lasts only 24 hours.

The cyber promotions are accurate reflections of ING DIRECT’s brand and the type of financial institution they’ve become — all digital/online, retail-centric and always focused on the “savings” theme.

“Putting money on sale breaks the mold of what Canadians expect from a bank,” said Peter Aceto, President and CEO. “A sale like this reinforces ING DIRECT’s commitment to help Canadians save, and shows that saving can be as fun as spending.”

Mark Nicholson, head of digital and interactive at ING Direct, said the campaign differentiates it from other financial institutions by acting “more like a retailer than a bank.”

“We are always looking for unique and creative ways to bring savings to Canadians,” said Andrew Zimakas, VP Marketing, ING DIRECT.  “What better way is there to get savers’ attention than by putting money on sale?”

According to a survey by the bank, one in four Canadians hit the web on Cyber Monday looking for the best bang for their buck. The survey also revealed that 35% of Canadians intend to spend less this year compared to last, with $450 being the average saved for holiday-related purchases.

ING describes its one-day sale as “an early gift for Canadians looking to save even more.”

2011 marks the third year in a row that ING DIRECT has held promotions on either Black Friday or Cyber Monday. In the first such event in 2009, ING’s Black Friday deals included a $121 bonus for opening Electric Orange checking account and a one-year 2% CD. In 2010, ING’s offers weren’t as strong.

While ING has tinkered with its specific products and offers over the years, they haven’t monkeyed with the basic formula very much at all. It seems clear that they are committed to the concept — presumably because it works. Limiting the deals to a 24-hour period minimizes exposure, so these campaigns can’t cost much. Even if ING only nets a handful of new customers, the PR value of media coverage alone probably makes it worth it. 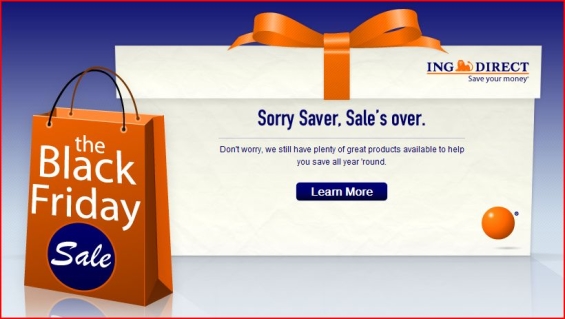 2011 marks the third year in a row that ING DIRECT has held promotions on either Black Friday or Cyber Monday.