According to a press release, the TV spot became an internet sensation on YouTube, with over 1.3 million views and a further 60,000 views for the ‘Making of…’ video.

For those who aren’t familiar, contactless cards allow people to make payments quickly and securely, saving shoppers the hassle of paying with cash or entering PIN codes into terminals. A secure sensor at the checkout counter senses an RFID chip on a contactless card, then immediately withdraws the purchase total.

To extend the promotion, Barclaycard came up with a YouTube contest challenging people to make a water slide video of their own. The contest wrapped on April 5.

The winning video was a spoof of an 8-bit video game from the 80s. All of the artwork for 8-Bit Water Slide was built and animated in Flash, then printed and cut out and reanimated in real life.

The winning entry has been criticized as being an entertaining display of animation but not the wildly creative “water slide concept” called for in the contest.

The winner received a “once in a lifetime trip” around the world to the five coolest water slides ever built.

Key Takeaway: If you’re going to run a contest seeking User-Generated Content, this is a good way to go about it. Barclaycard set the strategy and established creative guidelines, not the contestants. You risk making a big mistake — one you might really regret — if you start handing over strategic decisions to the general public. Barclaycard gave people the basic framework, then asked people to take the idea and run with it. What Barclaycard didn’t do is ask folks to “submit creative ad ideas for a new contactless payment card.” The best brands are based on strategy and built very deliberately, not through a hodge-podge collection of various polls, drawings and contests. 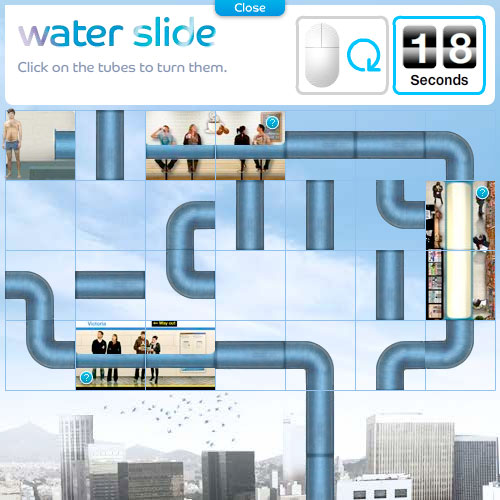 This Flash-based game is a creative extension of the overall promotion. Unfortunately, the game itself is only so-so. There is a lone, solitary “level” that takes a little as 5 seconds to solve, giving the game almost zero replay value and greatly diminishing its viral quotient.

Earlier this year, The Financial Brand rated and reviewed other Flash-based games from financial institutions. Barclaycard’s Waterslide game would have got two stars out of five. The graphics and concept are good, but the game designers stopped too soon (or were cut short by budgetary constraints). There were unrealized opportunities to make the game much more cool, challenging and fun.