Subscribe Now Get The Financial Brand's FREE Email Newsletter
As banks and credit unions decide whether to support wearables, it is important to analyze the market and build a game plan for success.

By Shobhit Mathur, Ajay Yadav and Craig Besnoy of Mindtree

The official inauguration of Apple Watch brings great expectations inclusive of changing the way we think about how to gather data and turn it into information. Until now, achieving information gathering meant entering information via keyboard, voice or video. Now, we are embarking on a world of ‘sensor data’ and it suits consumers.

More and more, bank and credit union customers prefer to bank wherever they are, using their smartphones, tablets or wearables as the remote control for their financial management. If consumers are using mobile-connected devices to streamline their to-dos, then what is next for these tiny, mobile computers? Proving their continued benefit for banks and financial institutions.

For example, the Apple Watch puts sensors into the wrist of every user – stockbrokers will overlay their heart rate data on top of their trade data.

This sensor gathered information, when combined with time and geography will add another dimension to our decision making process and by investing and rolling out wearable-centric functions, banks can reduce marketing costs, satiate customers’ expectations and gain enormous publicity. Some of the early services rolled out by banks includes alerts and notifications about bank balances and frauds on smart watches. 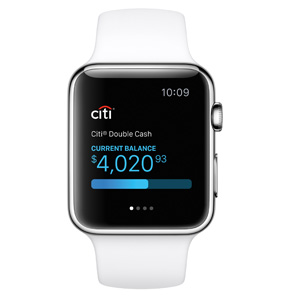 However, the challenges for widespread wearable adoption in banking are much more complex.

While banks are one of the biggest holders of consumer data, which plays well in the wearables game, innovation has been a slow process due to stringent compliance factor and ensuring the security of customer and investor data. We’ve seen wrist wearables take the lead over ear-based wearables in the fitness sector. However, would this ring true in the financial environment, where users may prefer the hands-free advantages of accessing their bank balance on their wearable while talking on the phone?

Many claim the Apple Watch will be the driving force for the growing popularity of wearables. According to Canalys, the 720K Android Wear devices shipped in 2014 was a fraction of the 4.6 million smart wearable bands sold. Still, a few forward-thinking banking organizations have started tech trials for particular wearable devices and may be ahead of the curve: 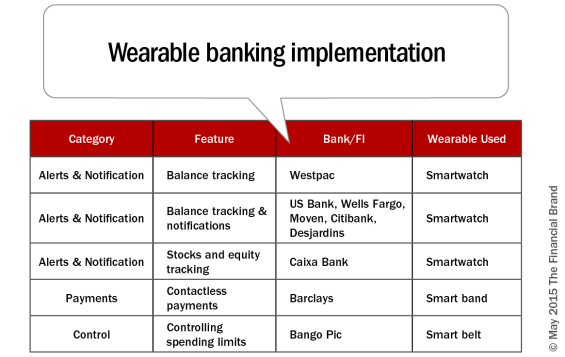 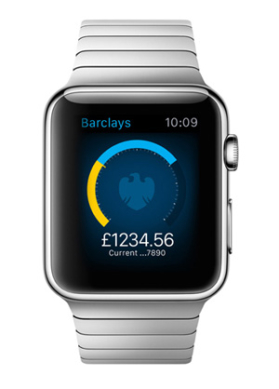 Before jumping into wearables, banks can experiment on a smaller scale to identify and evaluate wearable banking concepts ahead of making a large investment. As banks and financial institutions examine and identify wearable concepts, leaders should keep the following in mind to identify lasting wearables concepts:

Before saying no to wearables, the leaders of financial institutions are better off giving them the consideration they merit. While this process is a not a painless one, ultimately wearables will serve industries on a new level of unification. The wearable devices makes the operation more convenient and effective as they are hands free and allow the user to multi-task with phone and the wearable simultaneously. Going through this process, while time consuming, establishes the building blocks for innovative digital banking concepts for next-gen channels. 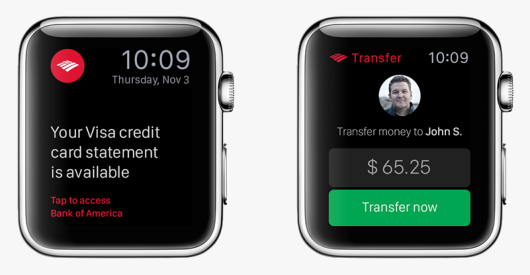 Unlike previous technology revolutions like smartphones or tablets, wearables include a long list of disparate product types such from digital wrist computers to digital tattoos, which bear only a superficial resemblance to one another. Such a wide range ensures the creators of wearables within banking and insurance can deliver a differentiated experience for the end consumer. Imagine going as far as accessing biometric information from a wearable and using it to design new solutions to solve business problems.

As customers unbox their first sets of Apple Watch gadgets, banks and other industries will be listening to the feedback of early adopters. Meanwhile, they will continue researching how wearables within banking and insurance can deliver a differentiated experience for the consumer, simplifying banking, and adding value where traditional channels fail.

While it is very difficult to determine growth for new technologies, estimates were made as part of the BI Intelligence Wearable Market Report. Here are some of the expectations.