Political strategists tell us negative ads are more effective than positive ones. That’s why they run glowing ads describing the candidate early in a campaign, saving the heavy artillery to blast their opponent(s) later on — particularly in the homestretch.

Many years ago, I was the campaign manager for a high-profile congressman who was voted “most likely to lose.” We ran an intense, fast-paced campaign. Every week was jammed with crises and responses, attacks and pivots. Fortunately we won, but in the process I learned practical tactics that financial marketers seldom think about. In the banking industry, the integration of marketing, consumer research and tailored messaging is an effective-but-largely-theoretical concept. However, to political campaign managers, skillful marketing execution is the only thing separating winning from losing. In politics, there’s no second place.

While opposition research and opposition advertising are staples in the marketing diet for political campaigns, it’s outside most financial marketers’ comfort zone. In the banking industry, marketers prefer to instead emphasize their positives (like “great rates” and great service”), while ignoring the competitions’ shortcomings.

Perhaps it’s time to reconsider your position on “opposition marketing.”

Megabanks may shovel up large chunks of market share, but their accountholders are increasingly anxious to switch. Community banks may be growing assets, but they are losing customers — an ominous trend.

Research suggests that big bank customers are holding their collective noses when opening new accounts. They don’t trust megabanks, think their fees are too high, and believe they are out only for themselves. Many consumers still hold them responsible for the 2008 economic collapse. But that’s not enough to keep them away. Consumers line up for their mobile services, sprawling networks of ATMs, and higher branch density.

National brands have doubled down on their mobile banking advantage by making huge investments in apps and features. As they have driven transaction costs down to a couple cents, operating expenses for smaller institutions continue going up. (Core providers may be slow to innovate, but they’re fast to increase fees.) The glimmer of megabanks — with their shiny mobile apps and polished retail locations — projects a modern image that is in marked contrast to many community institutions who wrestle with inferior perceptions.

Political strategists in this situation would advocate two approaches: (1) redefine your opponent, and (2) refute misperceptions.

You can redefine your opponent by reinforcing existing negative perceptions held among consumers. Emphasize megabanks’ impersonal service, high fees and inflexibility when making loan decisions. Cite independent research studies to show big bank fees are higher, or that your service is better. Reference the penalties and settlements caused by their misbehaviors, for instance, the $5 billion in fines the big boys had to pay to settle charges made for manipulating foreign currency exchange rates. Or the record-breaking $16.65 billion paid by Bank of America for selling flawed mortgage securities. Cast them as “big business banks,” too large for Joe average. Have your competitors stopped offering coin counting services? How about children’s accounts? Compile a list of negatives and create ads around the most potent or incorporate them in your advertising copy.

Dispel negative perceptions about your own institution. Promote your easy-to-use banking app and its features. Stress that the number of ATMs in your network exceed the big banks. Emphasize your dependability, and demonstrate your commitment to the community. Use faces of your bankers to personalize service and underscore low turnover rates. Develop a brand profile that incorporates your unique strengths; include consistently in all marketing material. Turn it into a two-minute elevator speech that employees can use to quickly differentiate their institution.

Here are a few of the ads we created at Liberty Bank that illustrate opposition advertising. Once users click on the ads they are sent to a landing page with opportunities to learn more about the bank’s mission. 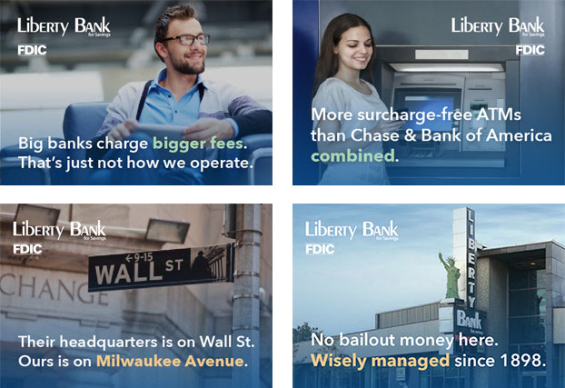 The most persuasive arguments are based on customer perceptions. Build on those perceptions to undermine competitors and emphasize your strengths. Buttress them with references to surveys and news sites to enhance credibility. The worst thing you can do in any political campaign is allow your opponent to define who you are. It can only end in defeat.