The Bank of Ann Arbor, a $1.4 billion institution based in Michigan, is running a playful series of billboards mocking its competitors’ lack of local knowledge. The twist? Each ad is a submission from one of the bank’s Facebook fans.

“Non-local banks think The Jerk Pit is a single’s bar,” reads one of the billboards.

The ad was written by Beth Langenderfer, who is a Facebook fan of the bank. Her reference is actually to the Jamaican Jerk Pit, a popular local eatery near the University of Michigan campus.

The billboards feature user-submitted slogans along with the names of those selected as winners in the bank’s “Build-A-Billboard” Facebook contest. The nine winning headlines draw on a combination of local haunts, landmarks, nonprofits, businesses and people — all with names outsiders might easily confuse with another meaning.

For the “Build-a-Billboard” promotion, Bank of Ann Arbor built a custom Facebook app so entrants could write their headlines on virtual billboards and then post them to the bank’s Wall. Over 700 entries were submitted by 400 unique users during the contest, October 3 through November 18.

Nine weekly winners were chosen, with Janine Hutchinson’s slogan selected as the grand prize winner: “Non-local banks think Mani Osteria plays for the Tigers.” Mani Osteria is a popular new restaurant in Ann Arbor, not a baseball player for the Detroit Tigers. 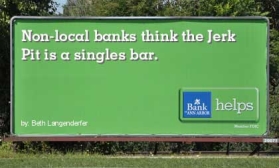 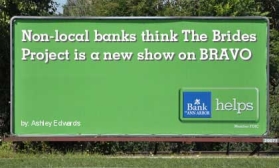 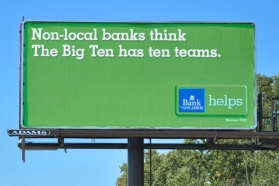 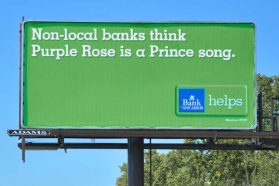 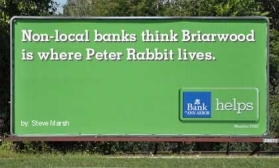 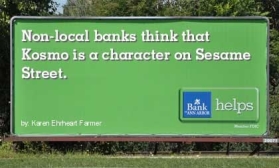 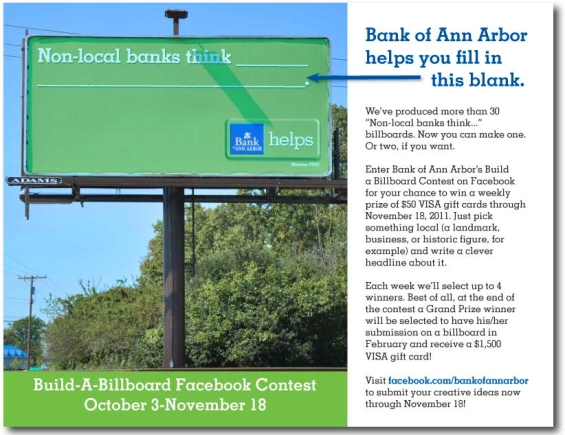 “Non-local banks think Thurston was stranded on Gilligan’s Island.”
Translation for non-locals: Thurston is the name of an elementary school on Ann Arbor’s northeast side.

“Non-local banks think Kosmo is a character on Sesame Street.”
Translation for non-locals: Kosmo is a small deli in a shopping center in downtown Ann Arbor. (It’s quite popular with students at Community High — important to remember when you listen to one of the radio spots.)

Bank of Ann Arbor has over 15,000 Likes on its Facebook page. The bank only had 279 Likes back in Spring 2011, but that number swelled to nearly 17,000 after hosting “The Sweet 15 Local Charity Drive,” its first Facebook contest. The bank invited people to vote for charities to determine who would receive $75,000 in donations. Over 100,000 votes were cast.

You might notice the bank has shed almost 1,500 followers since the charity promotion ended. But it was undoubtedly the success of the “Sweet 15” contest that made the “Build-a-Billboard” concept possible. Without the thousands of Likes generated from the $75,000 charity giveaway, Bank of Ann Arbor would have seen far fewer billboard submissions.

It’s important for Facebook marketers to maximize their fan base in these ways, especially when they spend $1 (or as much as $5, in Bank of Ann Arbor’s case) per Like building a community.

“Our Facebook contest speaks to a broader trend of using social media to engage consumers in a brand,” said Tim Marshall, President/CEO of the bank. “It just goes to show that even smaller, locally-based companies can use social media to gain awareness and engagement with the local community.”

Bank of Ann Arbor has been using clever twists on area landmarks, businesses and public figures in its advertising since Spring 2010. The campaign, featuring ads with slogans such as “Non-local banks think Bo and Woody were in Toy Story,” won two ADDY Awards in 2011.

Bank of Ann Arbor started getting emails and phone calls from people volunteering other suggestions for local landmarks that could be featured. It was this enthusiasm, the bank explains, that inspired them to create a Facebook contest inviting more ideas.

To promote the “Build-a-Billboard” contest, the bank created ads for teller mats and equipped staff with handouts. They also promoted the contest with ads on their own website.

This is Bank of Ann Arbor’s first time experimenting with crowdsourcing, and believes its Facebook-generated billboards are a first in their area.

Analysis: This is such a more positive way to poke fun at bank competitors than all that nasty “look-how-evil-they-are” stuff you see so often these days. Bank of Ann Arbor is stressing its brand differentiation in a way that’s relevant to their audience, while also promising something they can back up and deliver.

A fringe benefit of the campaign is the free advertising given to local business and non-profits who are excited to see their (relatively small) brands featured so prominently. For a local financial institution like Bank of Ann Arbor, it’s smart to align your brand with popular neighborhood hangouts.