Subscribe Now Get The Financial Brand's FREE Email Newsletter
In its first big ad campaign in years, Bank of America is shooting for humility by shifting focus off itself and onto "connections." But is this the image repair job the bank needs?
Subscribe Now!

A little more than a year ago, BofA circulated an RFP to potential new ad agencies saying the bank was seeking a strategic position that can serve as a “North Star” for all business and marketing decisions, and convey that the bank is in the midst of a transformation.

There was more than the estimated $300 million in ad production costs that were at stake. Some observers in the ad industry felt that the entire BofA brand was on the line.

A Harris Interactive poll in 2012 said the bank’s corporate reputation fell more than any other U.S. company. “The general public believes that BofA has been more concerned with operational and financial recovery than with customers. They rate the bank low in levels of trust, ethics, and customer service,” Harris noted in its report.

To say BofA’s brand was bruised and battered would be an understatement.

“Unless its new agency comes up with a silver-bullet strategy — one that feels humble, honest and wholly unique for the financial-services industry — the exercise could prove fruitless,” noted Ad Age at the time.

Skip ahead to early April, 2013, when BofA unveiled its first major brand ad campaign in years.

The crown jewel of the campaign is a spot entitled “Portraits.” The minute-long TV commercial rolls back through the memorable moments in one family’s life, using portrait photos shot in the family’s living room as the visual hook supporting the narrative. The spot starts with an elderly couple sitting down for a selfie on their sofa.

“Before they sat down one more time just for themselves… Before the last grandchild graced the stage… Before Katie and her husband hit that rough patch… Before Kevin finally came home, and the first grandchild arrived… Before the sons in law, daughters in law, and Brad’s brief brush with the law… Before the second British invasion… Before Katie, Debbie, Kevin and Brad… Before they became a family… There was a connection that started it all, and made the future the wonderful thing it turned out to be.”

Narrated by actor Will Arnett, the spot closes with this: “We know we’re not the center of your life, but we’ll do our best to help you connect to what is.” 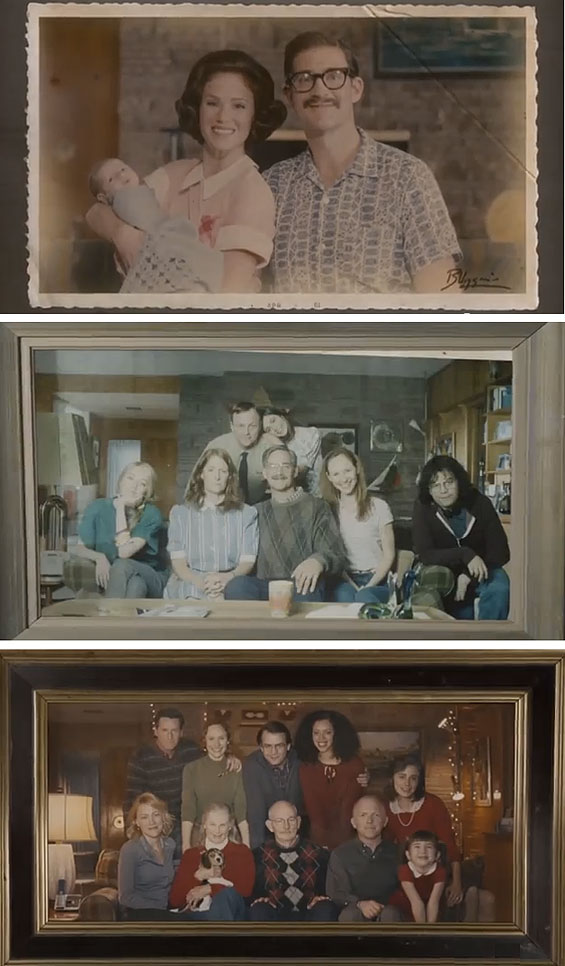 “Life’s better when we’re connected,” say the new BofA tagline. (In global markets, the tag line will be “The Power of Global Connections.”)

The campaign includes a suite of about eight different TV spots, digital advertising, print ads in 16 markets and some limited outdoor.

In one made-for-the-web video, Laurie Readhead, BofA’s CIO says, “Nobody gets up in the morning and says, ‘The thing I want to do today is bank.'” One after another, a parade of employees explain the importance of “human connections.” “We’re dealing with more than just dollars and information,” says one. “These are people’s lives.”

More: BofA’s $5 Monthly Debit Fee: The Backlash, The Fallout and What It All Means

Adulation For Ads From Many, But Skeptics Remain

Look around Twitter, and you’ll find many average consumers and ad types celebrating the emotive power, storytelling technique and production values of the new “Portraits” spot.

Steve Connelly, president of ad firm Connelly Partners, is one of them. He “loves” the new BofA commercials. “They’re the first bank I’ve seen to admit that banks are not the most important things in people’s lives,” Connelly told the Boston Herald. “Bank of America was the center of a lot of bad publicity, and I think they needed to come out with a very honest effort.”

But not everyone is convinced.

“The subtext of the ad is all about Bank of America,” said Jeff Freedman, CEO of the ad firm Small Army. “It’s another example of a big bank not being able to get out of its own way. I think it’s a mistake for them to come out with an ad like that. They were trying to pull at the heartstrings of consumers, but the payoff of that ad was ‘It all began with us.’”

Issues of false humility aside, other branding experts express concern that BofA may be applying a cosmetic, topical bandaid to a brand so deeply wounded it needs major reconstructive surgery.

“If they’re going to restore their reputation, it’s going to be done in the trenches not on the airwaves,” observed Charlie Elberson, VP/brand development at Wray Ward.

Jim Kim writing for Fierce Finance agrees: “In the end, the power to change the bank’s reputation will turn on the thousands of interactions between bank representatives and consumer that take place daily. The ad campaign could quickly become a national joke if there is no follow up by the people actually representing the bank to consumers.”

“Sure, the commercials are nice and all that,” notes John Maxfield, writing for The Motley Fool. “But they completely miss the point. There’s no question that Bank of America needs to repair its image. To do that, however, it doesn’t need a fancy and expensive marketing blitz. All it needs to do is apologize to its customers.”

Like many, Susan Bodiker with Orion Advertising thinks the spots are beautiful and heartwarming… and would be a triumph if they came from any other advertiser.

“Unfortunately for BofA, it will take more than pretty pictures to dispel the memories of foreclosures, fines and firings now associated with the brand,” Bodiker says.

Others, like Edward Boches, Professor of Advertising at Boston University, are more diplomatic. He says the campaign at least doesn’t violate the Hippocratic Oath: “First do no harm.”

Boches says the “Portraits” spot is both likable and beautifully executed. “That alone is an accomplishment for an institution that has lost so much of its good will with the general public,” he says with measured praise.

“This advertising wisely chooses not to reach too far and simply conveys a sense of humanity and connecting to customers,” Boches continues. “It’s safe, but that may be what the bank needs right now.”

But Boches also echoes the concerns expressed by other branding consultants: “Ultimately it will be the bank’s actual behavior and treatment of customers that will determine whether this campaign rings true.”

Has BofA Really Changed (More Than Just Its Ad Messages)?

Tracy Brady, a spokeswoman for Hill Holliday, defended the ads her firm created for BofA.

“We feel very confident that this campaign is the right way to tell people about the important changes at the bank,” Brady said in an email to the Boston Herald.

But what changes are those? Neither Brady nor BofA’s commercials make that very evident.

The flagship spot, “Portraits,” makes a point about “connections” and hints at the bank’s role in life’s big moments. But all the other commercials rounding out the campaign are pretty much product spots. The common conceptual thread that binds the campaign together — “connections” — isn’t substantively expressed beyond the flashback narrative device.

Meredith Verdone, BofA’s head of brand marketing, more aptly captures the campaign’s true spirit: “We are a facilitator,” she said. “It’s not about us. We need to focus on customer needs first and we know our place.”

Yes, that’s true. Banks take a backseat in people’s lives, and BofA’s spots reflect that reality nicely. But why is everyone at BofA harping on about how the spots capture “changes” the bank has undertaken?

The campaign certainly exudes a sense of humanity through its use of emotive imagery and Hollywood storytelling techniques. But does that convey the message of reform BofA is hoping to send? Does the campaign assuage people’s thirst for a repentant big bank?

“Coming out of the financial crisis, we were confronted with a serious set of challenges,” said Finucane in an internal video for employees. “We have fundamentally reshaped who we are.”

That may be so. But it seems folks are still itching for a little more proof.

Bottom Line: It’s easier to change your clothes than it is to change who you are and convince the world that you’re different.