Subscribe Now Get The Financial Brand's FREE Email Newsletter
For an acquisition or merger in financial services to be successful, the emotions and potential impact on consumers must be considered. Proactive communication, combined with daily monitoring of changes in experience, will help retain valuable relationships.

Mergers between U.S. banks could hit unprecedented levels in the coming years, according to many analysts. With this sometimes abrupt change, customers of the organization being acquired could react emotionally, leading to attrition and to a potential undermining of the financial models used to justify the merger in the first place.

For instance, the Deloitte Center for Banking Solutions reported 36% of bank customers who switched after an acquisition did so for emotional reasons. In another study, J.D. Power and Associates found that the probability for customers to change banks surges by up to three times after a merger or acquisition. That erosion of 20% to 30% or more signifies a substantial loss.

Because of these risks, it is important to understand the foundational reasons why emotions erupt. The unintended consequences of not being sensitive to the customers being impacted on both sides of a merger could contribute to the customer feeling abandoned or believing that they are being treated in an impersonal manner.

The study included 100 respondents from 18 states, pre-qualified as being a customer of one of 21 acquired banks using SNL. The survey comprised of nine multiple-choice questions, asking customers about their financial habits, behaviors, and actions. 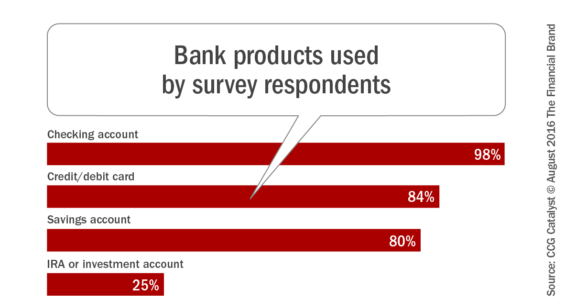 The respondents told us the bank products they used from their banks. The primary accounts held included checking accounts (98%), credit or debit cards (84%) and savings accounts (80%). Only a quarter (25%) of the respondents had an IRA or investment account with their bank.

When asked about their experience after the acquisition, 38% of the respondents rated the acquiring bank as positive, with 35% saying there was no disruption to their banking routine. For 15% of respondents, it was too soon to determine if the experience of merger was positive or negative. Only 12% found the merger experience negative. 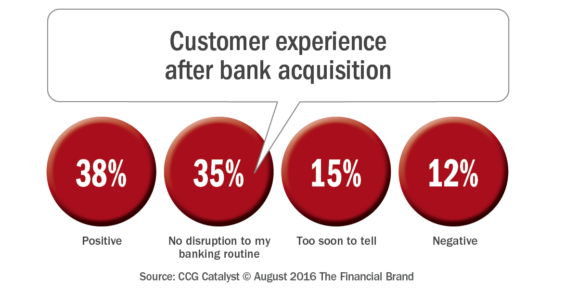 Customers were critical and become frustrated with the experience when the process hampered their needs. Citing poor customer service, loss of local bank or branch staff jobs, branch closings and a change to business practices. When asked about changes in products and services, the primary concerns were around increases or changes in fees or with product changes.

”Constant turnover of new staff who are not allowed to exercise any judgment or common sense; I want a banker who knows me and accommodates my needs and reasonable requests.”
— Customer, male, age 48, Texas, customer of CNL Bank

Expectations in the Future

How will customers react to changes to banking in the future? The hundred bank customers who participated in the study discussed their expectations and apprehensions.

Expectations about banking in the future revealed some positive attitudes, “Banking will be better, convenient, easier, improved and reliable – even more secure”. While there were still apprehensions about the future, “Increases in fees, less cash, and more online and less human interaction.”

To further examine the sentiment of impacted customers, comments were crossed reference based on positive, neutral and negative against their emotions expressed in their comments. Most of the positive comments were about the future of banking and expectations that banking, as a whole, would be more reliable and easier to access.

Neutral comments focused on the transition to online banking with everything done in the cloud. People with neutral comments also believed smaller banks will eventually be bought by larger banks.

Finally, those with negative comments suggested a dystonian attitude towards banking, including a dismal future for banking with impersonal interaction. 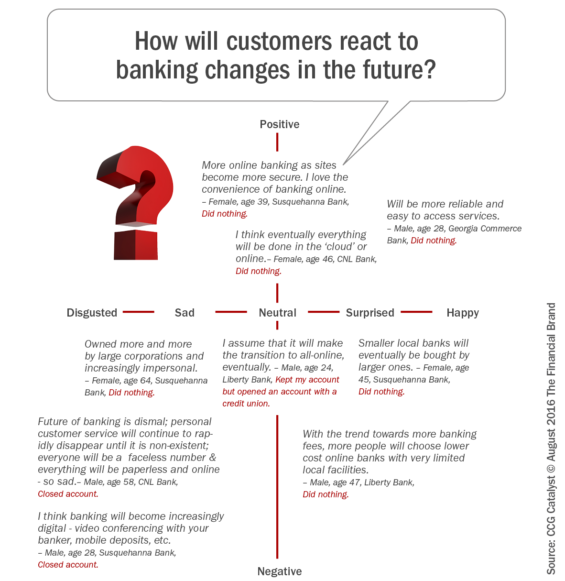 The study indicates that banks are doing a relatively good job with the process of acquisition. The majority of the respondents in the study had a good experience during their acquisition.

Overall, customers place a great deal of confidence in their relationship with the bank that provides easy access to their accounts, information and funds. Most banks go out of their way to ensure there is no disruption to the day-to-day business. In addition, customers place value on client-centric service they receive from the bank during and after the acquisition.

Bank customers today have many choices in financial service providers depending upon their initial treatment with the new acquiring entity. They may stay, or they may go, but no customer wants feel like they are only a number.

“Banks Acquired” includes data from 100 bank customers whose banks were acquired. The purpose of this research is to unveil insights about the banking customer’s attitude toward the acquired bank. These fresh insights will help bank executives understand the account holder’s viewpoint during and after the merger and acquisition process.

The full report provides 31 pages of analysis and insights from 100 bank customer’s attitudes regarding their acquired bank, 21 of the 35 recently acquired U.S. banks, sentiment, expectations and apprehensions. Banks Acquired contains 24 graphs illustrating the analysis of the findings.