There was a time when banks with big enough budgets would spare no expense to get their advertisements on prime-time television. And while traditional television still holds value, many bank marketers are taking a close look at new advertising opportunities in connected TV.

Connected TV (CTV) — also referred to as over-the-top (OTT) — is the overarching label for any TV or device that can be connected to the internet and access streaming video content beyond what is delivered by a cable provider.

As consumers seek alternatives beyond subscription platforms like Netflix and Hulu, many are looking to ad-supported “free” channels such as YouTube, Roku, and Peacock. These platforms are experiencing strong growth and offer financial marketers an opportunity to more precisely target their markets, Ross Benes, eMarketer Senior Analyst at Insider Intelligence, tells The Financial Brand.

“CTV allows for more precise targeting, which makes it easier for a single ad to have various versions that are sent to different audience targets,” Benes explains. “Changing the ad creative and rearranging who it is targeted for is difficult on TV but there is more wiggle room in CTV to make these changes.” he adds.

Cutting the Cord and Connecting the TV

The great shutdown of 2020 led consumers to spend a lot more time on their television and mobile devices. Streaming video grew by almost 75% in 2020 and continued to rise into 2021, according to PwC.

While consumers are spending more time on pay sites like Netflix and Hulu, they’re also looking more to ad-supported platforms. Besides those mentioned earlier, these include IMDb TV, Crackle and Vudu. Half of Americans say they watch these advertising video on demand (AVOD) sites at least monthly, according to Horowitz Research. YouTube is now the second-most used platform with more than 2.2 billion monthly active users, representing 81% of U.S. adults.

There’s a common perception that consumers are doing everything they can to dodge ads, but consumers aren’t against ad-supported television if it helps them save money. Two out of three consumers said they would tolerate more ads on a hybrid service if it would lower their subscription costs, according to PwC.

CTV Ads on the Rise:

Connected TV advertising is forecast to grow by 39% in 2022. Advertisers say it is more effective in supporting sales actions and increasing brand perception.

Not surprisingly, advertisers are putting more of their dollars into CTV. On the heels of 57% growth in 2021, ad spending on CTV platforms is forecast to grow by another 39% to $21.2 billion in 2022, according to the Interactive Advertising Bureau. Buyers in an IAB survey noted several advantages of CTV, saying it was 57% more effective in delivering website and sales actions and 46% more effective in increasing brand perception.

Traditional TV enables advertisers to reach a larger portion of the population with a single ad buy. CTV, on the other hand, typically has a higher concentration of younger viewers and offers the ability to more precisely target ads, Benes points out. Additionally, CTV enables advertisers to change the ad and rearrange it based on who is watching.

A bank or credit union advertising a mobile-based investment tool may find traditional TV has more of a Baby Boomer audience that is less likely to use their product, says Benes. “But CTV would give them more precision to target by age and income levels, which would increase the chances that the viewer exposed to the ad is likely to adopt it,” he states.

Another benefit of CTV is that ads are largely “non-skippable,” notes marketing agency LightStream Group. Since streaming viewers can’t channel surf to avoid ads like they can with traditional TV, they are more likely to watch ads until the end. In fact, pre-roll ads that play before a video have an average completed view rate of 70%, the agency finds.

“Rather than passively watching whatever’s on, streaming audiences are choosing what to watch, which creates a great opportunity to get your bank or credit union’s message in front of people who are really investing in what they’re seeing,” says LightStream.

The flexibility of CTV also offers bank marketers more freedom with their campaigns. Unlike traditional TV content that has to fit into half-hour long chunks, streaming content can be watched whenever and however long a viewer wants, meaning ads don’t have to fit into neat 15 or 30-second blocks.

Ross Benes notes that while ad buyers may be tempted to buy CTV inventory on the cheap, they should work with trusted partners to run post-campaign analysis and keep campaigns tied to quality inventory. The analyst also recommends controlling frequency capping — the number of times a viewer can see an ad.

“As more upfront dollars go toward streaming, advertisers must try to control frequency capping, which plagues digital video advertising,” Benes advises. “Streaming platforms can control frequency of an ad but the advertiser has to demand that control as part of the deal,” he adds.

Advertisers should also ensure they take advantage of the ability to customize their ads to segmented markets, recommends Natasia Langfelder, Marketing Content Manager at Data Axle. They can use innovative design and testing to lead viewers down the buyer’s journey with a variety of formats such as in-stream video ads, interactive pre-rolls, and home screen placement ads. By embracing the flexibility of CTV they can use more sophisticated testing to determine which campaigns work the best.

For example, fintech company Self was able to create two separate CTV ads, one for single, middle-aged women, and another for urban dwelling families, as depicted below. 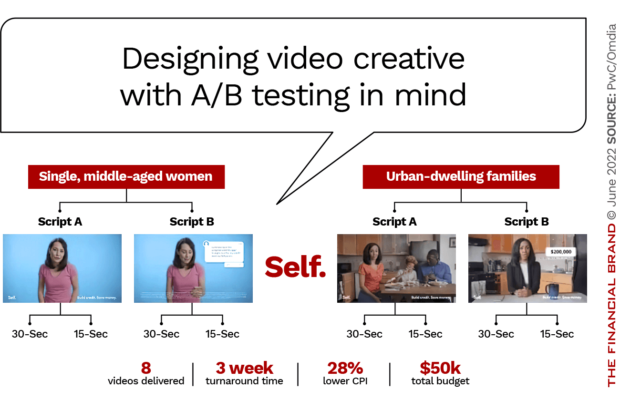 Self created eight different videos with two scripts for each to target. “Advertisers can A/B test ad types, messaging and CTAs to see which ones better resonate with their target audience,” says Langfelder.

Read More: The Digital Ads Banking Consumers Hate Most (And Why)

Mid-roll video, as used in commercial breaks, are the bread and butter of CTV, Benes observes. Here, some advertisers are experimenting with interactive ads, banners and other new products such as “shoppable” TV ads.

In a presentation in May 2022, Roku announced new advertising solutions, including such shoppable ads. When viewers click on these ads, it sends a message to their phone with a link to find more information or start shopping.