Subscribe Now Get The Financial Brand's FREE Email Newsletter
CharterBank wasn't happy with their Gen Y initiative, so they volunteered for a marketing makeover. On the final day of The Financial Brand Forum 2014, CharterBank saw two new concepts for the first time ever — live on stage — while hundreds of bank and credit union attendees looked on with fascination. Reality TV meets bank marketing in one of the most riveting sessions ever presented at a financial industry conference.
Subscribe Now!

CharterBank, a $1.1 billion institution with 17 branches in the southeastern U.S., had tried targeting Gen Y a while back with a “Student Banking 4.0” checking promotion. They used a mix of marketing channels, including web, outdoor, in-branch and campus outreach events with little result. After running the promotion for months, Charter had achieved no significant market penetration.

That’s when CharterBank decided to enter The Financial Brand Forum 2014 Makeover Challenge. They — along with roughly 40 other institutions — submitted their project for a live marketing makeover. The Forum Makeover is radical idea, where new concepts are presented to a financial institution’s marketing team on stage in front of a live audience. CharterBank’s Gen Y project was chosen specifically because so many financial marketers struggle reaching this crucial target audience, and we believed banks and credit unions could benefit tremendously by witnessing this sort of makeover in person. 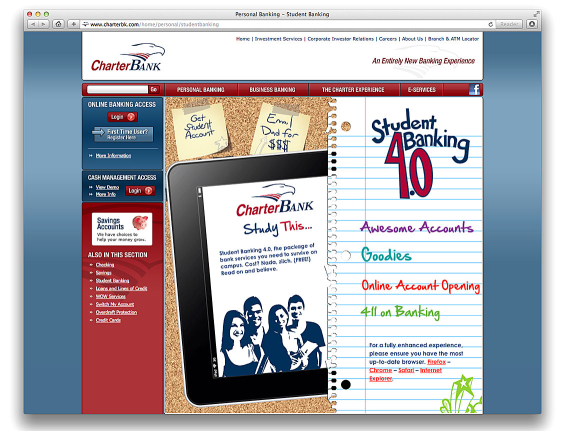 The original campaign developed by CharterBank. It doesn’t look like there’s anything really wrong with it — seems hip and casual. But apparently it wasn’t working.

A Big Shot of Adrenaline

Adrenaline is a multidimensional brand design agency with specialized expertise working with both banks and credit unions. Adrenaline had the moxie and confidence in their talents to volunteer to do the Forum 2014 makeover work for CharterBank.

Adrenaline invested some time talking with CharterBank’s marketing team about their Gen Y project — what they liked, didn’t like, objectives, metrics, etc. A creative strategy document was prepared, and the agency went to work.

Skip ahead to Friday, April 4. Hundreds of bank and credit union marketers had assembled for the final general session of The Financial Brand Forum 2014 to see the results of the makeover. No one in the room besides Adrenaline’s creative crew had seen the concepts that were about to be presented.

Option 1: The Pursuit of Happiness

There was a palpable sense of anticipation in the room as Adrenaline presented their first of two new concepts to CharterBank’s marketing team, including Donna Goodwin/SVP Marketing, Chad Fullerton/AVP Marketing and Josh Winstead/AVP Marketing Analytics.

Gina Bleedorn and Eduardo Alvarez of Adrenaline took the stage to present their research, approach, and two creative options to not only to the Forum attendees, but also to the client, CharterBank. The agency then recommended specific channels for each concept to promote and warrant “awareness, adoption, activation and advocacy” by the target demographic.

Option One, “The Pursuit of Happiness,” offered Millennials empowerment to pursue their dreams and thus, find happiness. The central product, “Bank-Free Checking,” boasts free checking that is free from the expected limitations of banking. With attractive, Americana throw-back visuals and understated messaging, the campaign channels included print and digital advertising, and video content creation in lieu of traditional broadcast, in the form of a short film series: “Pursue Happy.” On-campus sponsorships, social microsites, an Obstacle Course Fun Run, and a series of on-campus giveaways were all designed to turn adopters into advocates. 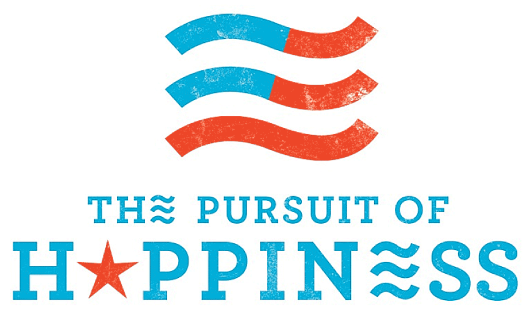 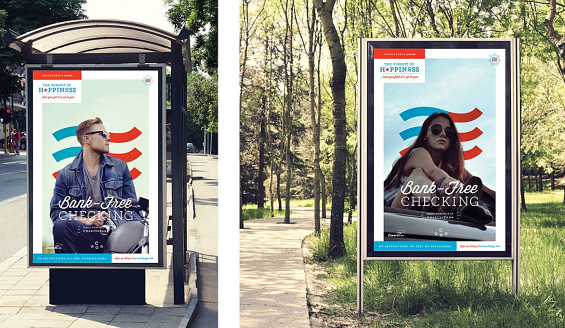 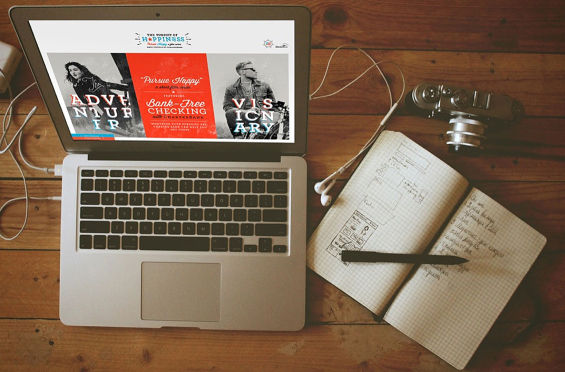 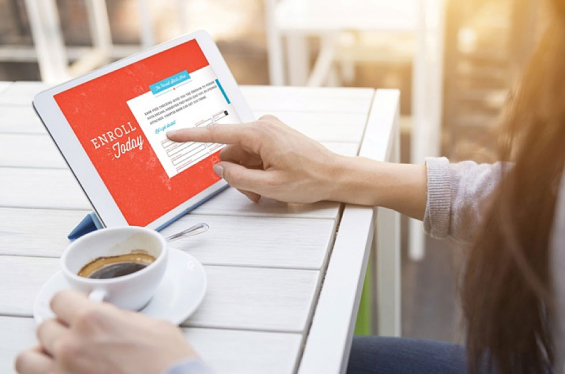 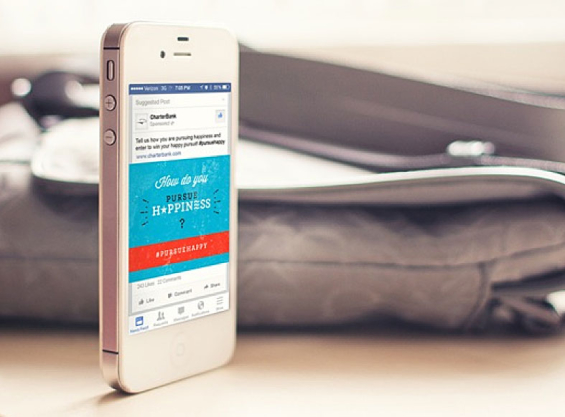 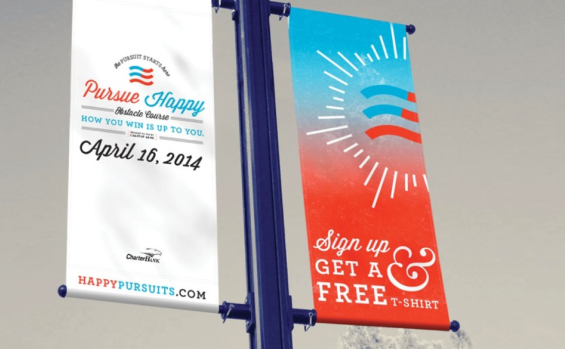 As part of “The Pursuit of Happiness” concept, Adrenaline presented an idea for an obstacle course event where Gen Y participants would scramble over and around metaphorical banking barriers. Participants would be showered with swag, including t-shirts, water bottles and other branded items. 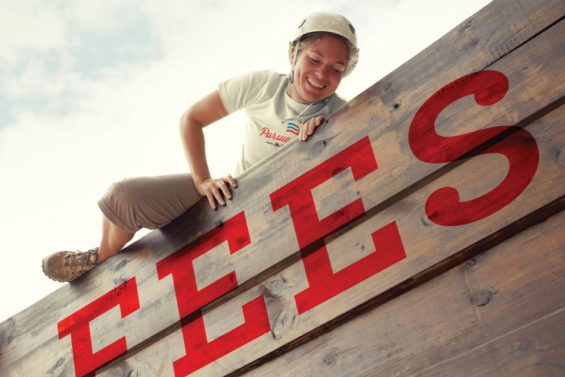 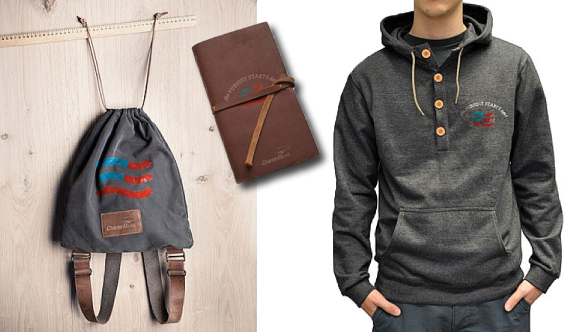 Option Two, “Join The Revolution,” appeals to the Gen Y desire to be enlightened, and part of a bigger cause. Addressing the audience more disruptively, phrases from recent American history are reinterpreted in an unexpected and amusing way. Keeping the same spirit of national symbolism drawn from CharterBank’s brand, this campaign focuses on “We” as the first did “Me.” It’s in-your-face, bold messages, typography and icongraphy is designed to entice and entertain student audiences. 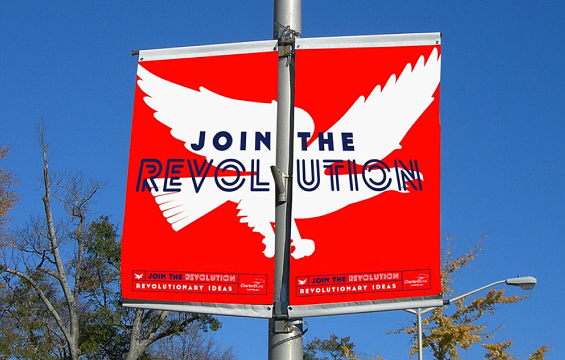 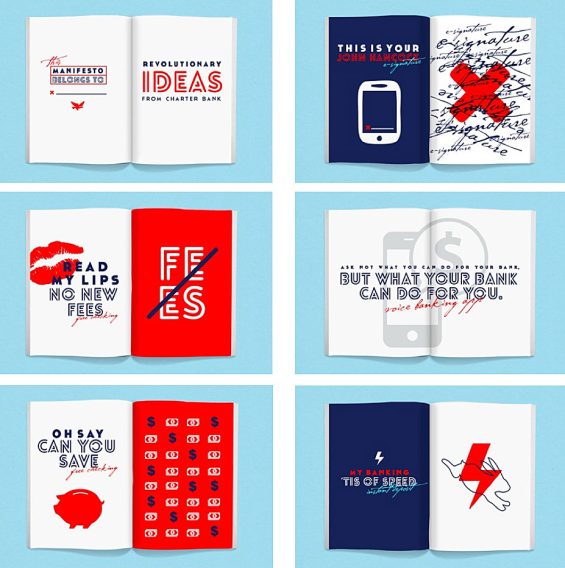 Pages from a “manifesto” or “Declaration of Banking Independence” written to express CharterBank’s philosophy about student checking accounts. 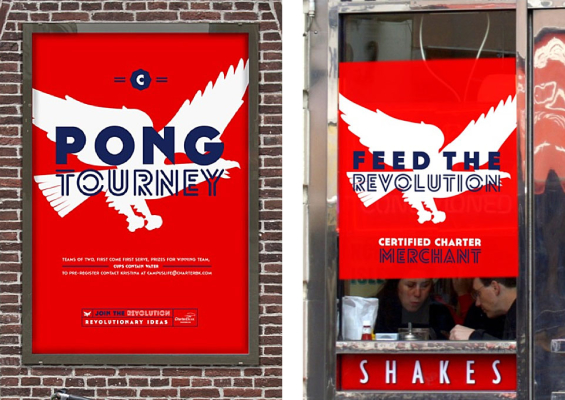 For the “Join the Revolution” concept, Adrenaline presented two interesting “activation” ideas. One was for a beer pong tournament (shown left), and the other was a merchant discount program for those carrying a CharterBank student debit/credit card (shown right). 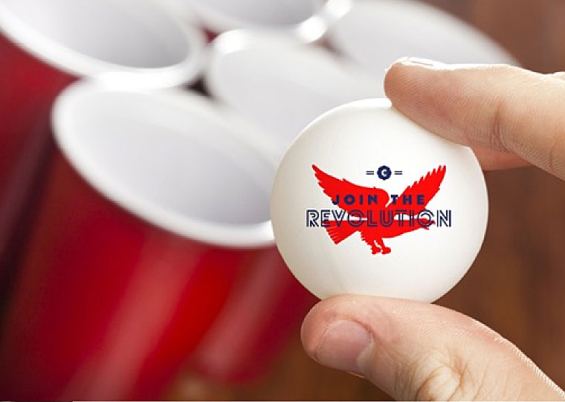 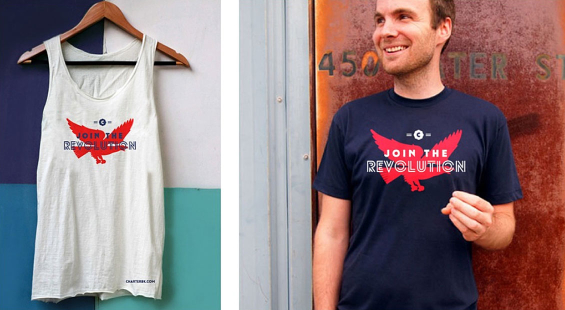 And The Winner Is…?

On stage, CharterBank’s marketing team was asked to provide honest feedback on the two concepts. But both options were so strong that the trio struggled to make a decision. Ultimately CharterBank asked the crowd for input. Even after three votes and more than a dozen comments, the room was almost exactly split in opinion.

Finally, the client finally chose Option One, “The Pursuit of Happiness,” with the possible incorporation of some ideas from Option Two. While they felt both would be successful, their chosen option seemed an easier sell to the organization with more longevity potential.

The audience got to vote for their favorite concepts, and they loved it. The CharterBank/Adrenaline makeover was the second-highest rated session at the Forum 2014, and nearly a quarter of all attendees said it was their favorite part of the entire conference.