Low-income and fee-driven consumers are a challenge for retail financial institutions. They are the most needy yet least profitable segment to serve. With pressure on profits coming from multiple directions, there is — quite literally — very little margin for error.

An in-depth report from Raddon Research Insights takes a fresh look at how banks and credit unions can serve what they call the “Mass Market” without going into the red.

Raddon breaks down the retail banking market into six segments, defining the Mass Market as those U.S. households earning less than $50,000 annually. This cluster represents roughly half the total consumer banking market, a figure that mirrors the U.S. Census Bureau’s median household income of $51,250. 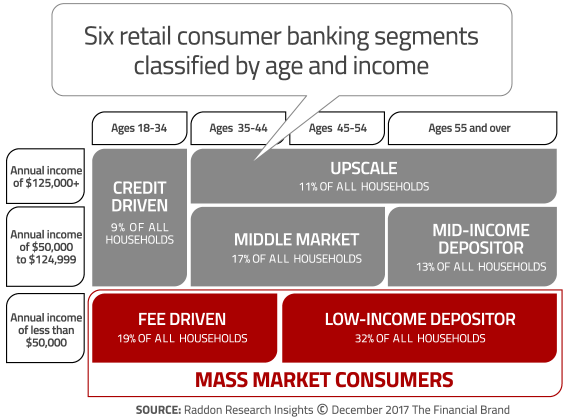 In their analysis, Raddon divides the Mass Market into two segments:

But Congress and regulatory agencies have been looking at ways to choke overdrafts, leaving financial institutions with two choices: either throw their hands up and stop serving these consumers, or find ways to improve the profitability of this segment. And as is the case with any conversation about profit margins, the issue boils down to costs vs. revenues. How can banks and credit unions reduce the disproportionately high operating costs to serve Mass Market consumers? And how can they replace the lost overdraft revenues that are so desperately missed?

Because Mass Market consumers are heavy branch users, serving them is an expensive affair. According to Raddon, Mass Market consumers make up only 20% of the deposits and 26% of the loans at a typical institution, but they account for a staggering 51% of the branch transactions. Nearly half of these consumers (46%) visit a branch at least once a month to deposit checks with a teller, but only 29% ever use an ATM to make deposits even though seven out of ten of them are regular ATM users. Raddon recommends banks and credit unions look at account holders’ transaction records to identify those who need education and incentives to use ATMs for deposits.

Raddon has found that consumers who use mobile deposit are 12 percentage points less likely to use branches. You don’t need to be a CFO or VP of Branch Operations to know that a 12-point differential is enough to make a sizeable dent in your cost structure. To make Mass Market consumers more profitable, find ways — like mobile deposits — to keep them out of your branches. Even if you can’t shutter a branch location entirely, your payroll costs will go down.

If you can’t keep Mass Market consumers out of your branches, then you can at least help them use branches more efficiently. After all, the largest expense for most traditional financial institutions is attributable to employee compensation and benefits — primarily branch-based employees. Raddon says you can cut these expenses by reducing teller staff and replacing them with interactive teller machines (ITMs), which provide the same functionality at a fraction of the cost.

Among all consumers looking to purchase a home, 36% are in Raddon’s Fee Driven category, who predominantly younger consumers. In fact, 30% of Fee Driven consumers say they are in the market for a home, and Fee Driven households represent more than half (52%) of the first-time home-buying market. Unfortunately only about a quarter of them have the traditional 20% needed to make a down payment, but that doesn’t stop them from dreaming about a new home — four out of five are at least someone interested in a first-time homebuyer’s program. 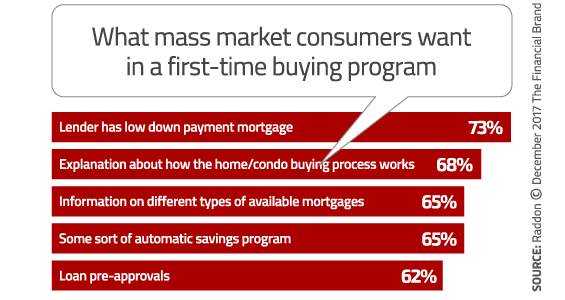 Raddon recommends giving younger borrowers the opportunity to purchase a home by building a program that addresses these topics.

Raddon says financial institutions have opportunities to increase their revenue from Mass Market households by deepening their relationships and increasing the number of products sold to these consumers.

Raddon says the top-performing institutions successfully cross-sell their products and services to 16.3% of their customer base every six months, whereas the average institution hovers around 12.6%. But the impact of that difference is massive. That improvement in cross-selling increased their share of loans by six percentage points, which, in turn resulted in a significant increase in loan volume.

Using transaction histories, Raddon says financial institutions should be able to easily identify those account holders who have are not using mobile banking but who are paying for a monthly cell phone plan and target them with educational materials. This outreach campaign can include information about convenient, time-saving services like mobile deposit capture and possible incentives that encourage both the adoption and usage of the institution’s mobile app.

Keep in mind: if someone has a mobile phone today but isn’t using your mobile app already, they are very likely to be among the cohort of consumers who have significant security and/or privacy concerns about mobile banking. Therefore, you should incorporate security messaging and privacy reassurances into your Mass Market mobile marketing campaign.

According to Raddon’s research, only 12% of consumers visit a branch to open an account or get a loan. The other 88% of the time, they are there to conduct a transaction or perform some other non-revenue generating task. Therefore Raddon says it is incumbent on financial institutions to convert those transaction-oriented and service-oriented visits into cross-selling opportunities. Inasmuch, Raddon says staffing should be optimized so that all branch staff are capable of completing sales functions rather than splitting staff between sales and transaction-focused personnel.