The Beijing Games are scheduled to start four months from now, but that’s not stopping Bank of America from jumping on the bandwagon early.

The effort centers around an online video contest to see who has the best Olympic cheer. “America’s Cheer,” as the campaign is called, includes a microsite, Facebook page and Flickr set.

Here’s one creative entry to kick things off: 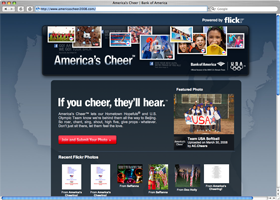 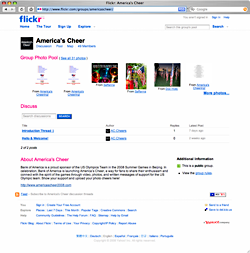 There’s also a cheesy 4:39 American-Idol style video for the competition. The only real highlight is the contestant who yells “Whoo hoo!” at the 2:15 mark.

Regarding the controversy surrounding China’s hosting of the Olympics, B of A says its “sponsorship is actually focused on the U.S. athletes, rather than the Games themselves. Our support is independent of the venue where they compete.”

This year’s Olympic campaign will cost B of A an estimated $35-40 million, said Joe Goode, corporate spokesman for Bank of America, in USA Today.

Key Question: How will the public react to corporate sponsorships in the Beijing Olympics…especially once the games are underway and these sponsorships will be much more conspicuous?