The erstwhile Laurel Federal Credit Union is being forced to spend more than $80,000 changing names — again — five years after becoming Avanta FCU. Last year, Advanta Bank in Utah, enforced its federally-registered trademark on the word “Advanta” by giving the Montana-based credit union one year to change names or face a lawsuit.

10/27/2021 Editor’s Note: Avanta Federal Credit Unions has since been shut down.

“We thought we’d done due diligence before, but the attorney said it is close enough and you won’t win,” said Tracy DuFresne, VP of HR and Marketing for the credit union, in an interview.

Advanta Bancorp has held a federal trademark on Advanta since 1987.

The shift to Altana becomes official on July 1. The credit union says the bulk of the $80,000 cost will be spent changing the signs inside- and out on its seven branch locations.

Indeed a name change is no small undertaking. “It’s massive. We have different people in different areas taking care of this,” credit union CEO Rhonda Diefenderfer told the Billings Gazette.

The credit union received permission from the state and the NCUA to switch from Laurel FCU to Avanta back in July 2004.

Reality Check: Just because the NCUA or your state’s financial division says it’s okay to use a name doesn’t mean you won’t get sued. Their evaluation of a name includes only a limited and superficial look at similarities with competitors.

Oddly, an AP article on the story mischaracterizes the situation as a “patent dispute.” Patents, while issued from the same federal agency as trademarks, protect processes and inventions, not brand assets. This is purely a trademark issue, and patent law doesn’t have any bearing on the case.

“My advice is to work with a professional patent attorney.”
— Rhonda Diefenderfer,
CEO/Altana

No fewer than five different stories on the snafu appeared in the mainstream media following the credit union’s announcement at its annual meeting last weekend. Despite all the coverage in the last week, there was no message, update or press release regarding the name change on the credit union’s website. 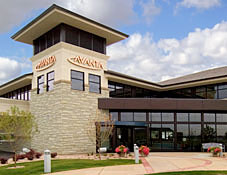 Presumably, the credit union chose Altana because it was the name that was legally available that most resembled the Avanta name. The new name is what’s known as a neological- or “coined name,” and has no literal meaning.

“Out of more than 300 names, we gave 90 to the attorney,” said Rhonda Diefenderfer, president of the credit union. “Maybe four names survived in her formal search process.”

The credit union has applied for a federal trademark for its new name.

There is another Altana, a chemicals and coatings company in Germany, but they don’t represent any threat to the Montana-based credit union.

altanacu.com and altanacu.org were both registered the 10th of June. They currently point to they credit union’s website at avantacu.org.

Key Takeaway: It’s almost impossible to find a real word that isn’t already trademarked in the financial industry. Coined- and unconventional names are the safest path. Not only are you more likely to end up with a unique, differentiated name, you will likely dodge a mountain of legal nightmares. Unfortunately in the case of Avanta, the coined name they picked was too close to something that was already trademarked.