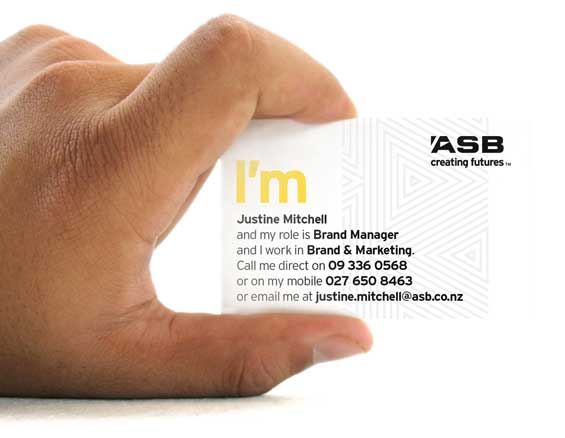 ASB Bank, a large Aussie-owned bank in New Zealand, showcases its new casual personality on an employee’s business card. The conversational tone is part of a massive rebranding effort the bank undertook in 2010.

The move of ASB Bank from TBWA\Tequila, its agency of over ten years, to Droga5 was one of the year’s most captivating stories in New Zealand marketing. Not surprisingly, there’s been plenty of interest as to what Droga5’s Andrew Stone, Mike O’Sullivan, Jose Alomajan and the team would come up with. Well now you can now judge for yourself, with a massive refresh of the bank’s brand identity, and a new positioning slogan, “Creating Futures.”

Stone believes this is the biggest brand transformation he’s seen in New Zealand since BellSouth became Vodafone. It’s certainly more than just another bank campaign and the new, personal, cheeky and fairly Kiwi brand voice that has been developed will be implemented across all touchpoints, from fax headers to outdoor ads, from the copy in the terms and conditions to the television commercials, from the redesigned and simplified online banking site to the ATMs, from the business cards to the staff t-shirts. ASB’s signature yellow color has been retained, but it’s changed slightly, as have the fonts. 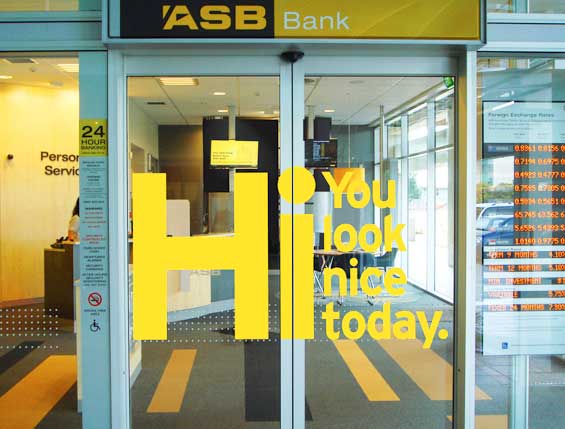 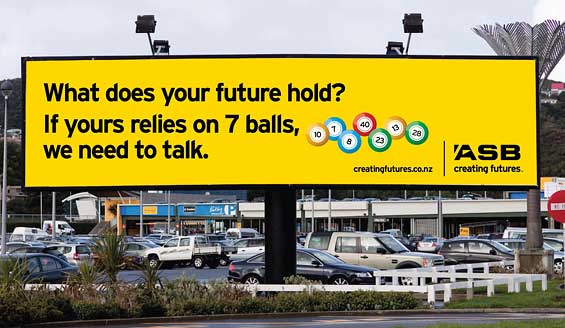 Stone also said a strategic review of ASB’s business led to 14 separate initiatives being tabled. The brand — and making it relevant for the next decade — became a top priority, along with branches, IT and products/services.

The main brand tenets — and the things ASB wanted to focus on — were truth (always a tough sell for a bank), simplicity and humor. And not just in its communications either, but rather across the whole business. To do this, one of the key themes in the new campaign is based on the phrase ‘unbanklike,’ something the client picked up during initial brainstorming sessions and chose to run with.

Looking at the end result, ASB doesn’t really feel like a large bank. There’s a fairly whimsical tone to the work and it almost has the feel of something a small boutique ad agency would come up with for its own brand, with quirky business cards, jokey first person ads, localized outdoor ads and a big yellow ‘Hello!’ welcoming customers to the new (and as yet unlaunched) website. There is an occasional hint of twee with some of the executions, but overall it seems to hit the mark and achieve its goal of creating a point of difference.

ASB general manager of brand and marketing Deborah Simpson said feedback from customers about the role their bank should play in their lives was pivotal to the development of the new campaign. “Our customers have been telling us they want their bank to look behind their transactions, to deepen the relationship between us by understanding and forming connections with their aspirations and dreams,” she said. “‘Creating Futures’ answers this call.”

She said there has always been “quite a bit of air” between ASB and the other large banks (ASB regularly outperforms its competitors when it comes to customer service, and has 11,000 fans on Facebook, which seems quite impressive). But that gap is closing, something Simpson believes is as a result of competitors replicating ASB. This massive brand relaunch is about finding a way to increase the gap once again.

After a reconnaissance mission to unearth interesting stories from ASB staff, eight narratives were selected for use in TV spots. When the staff were asked what they did, it was often process based, such as “I lend money.” But Droga5’s Stone says this campaign is a new lens through which to look at their roles and give them some context to show they help people. The campaign acknowledges each employee’s potential to be a powerful advocate.

“These are authentic situations we address with our customers every day,” Simpson said. “So using our ASB people rather than professional actors in front of the camera to portray the part they play is not only logical but also the right thing to do. The stories people see are a reflection of ASB itself: human, genuine, strongly service oriented and future-focused.”

ASB BANK – IVF
This is a heart-wrenching spot about a couple’s desire to conceive. ASB saves the day with a fertility loan.

ASB BANK – SHEEP
A boy learns the proverbial lesson in this TV spot: you can sheer a sheep many times, but you can only skin it once. (Apparently you can’t make an ad campaign in New Zealand without including sheep.)

To ramp up employee engagement, 160 ASB staff auditioned to feature in the ads and 70 were given acting roles.

The first commercial deals with the fairly intimate issue of fertility, showing that ASB can help out with funding for an in vitro fertilization treatment. The second is a sheep-based celebration of the entrepreneurial spirit ASB claims to find in its customers. The initial spots were directed by Flying Fish’s Gregor Nicholas, and features original music from the composers at New Zealand’s Franklin Rd.

She said research conducted earlier this year showed that “customers didn’t want to hear about us, they wanted to hear about what we could do for them.”

“We’re telling real stories but in an entertaining way and speaking to our customers in a way they can identify with,” she continued.

“The research showed that most banks talk about themselves. There’s a lot of chest beating about what they can do,” added Stone.

This doesn’t quite seem to mesh with the rampant use of the word “I” throughout the commercials, however.

All spots will be housed on ‘The Hub,’ an interactive page on the ASB website that Stone labels a first in New Zealand. The first three spots will be available online before they all go live on TV, something intended to be a reward for heading to the new site. 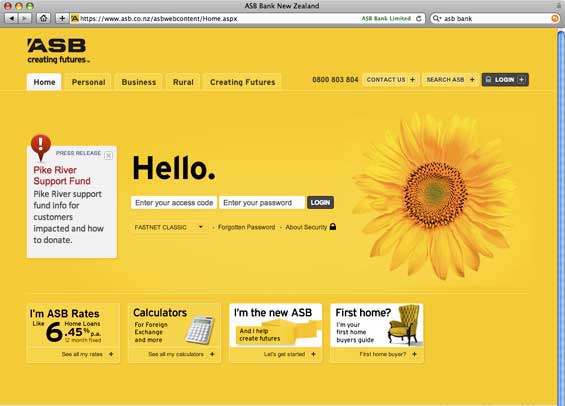 Notice where the login/password section of the site is positioned. It’s the hero of the homepage, not tucked off in some corner. 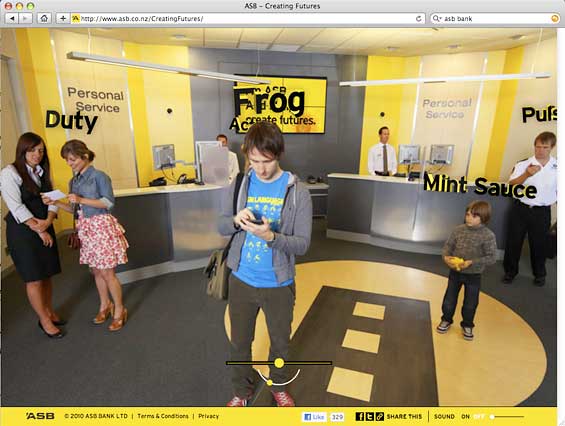 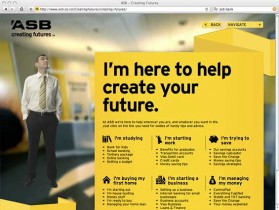 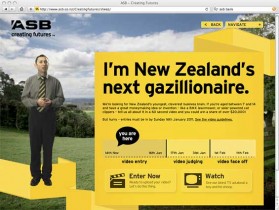 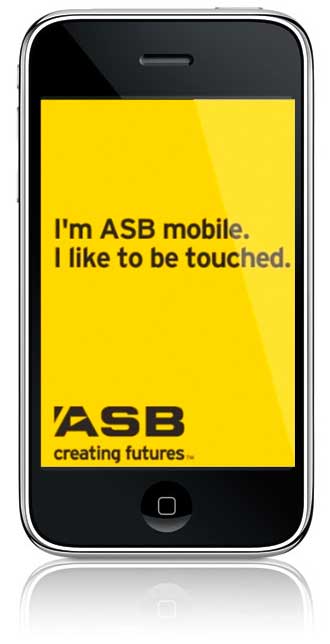 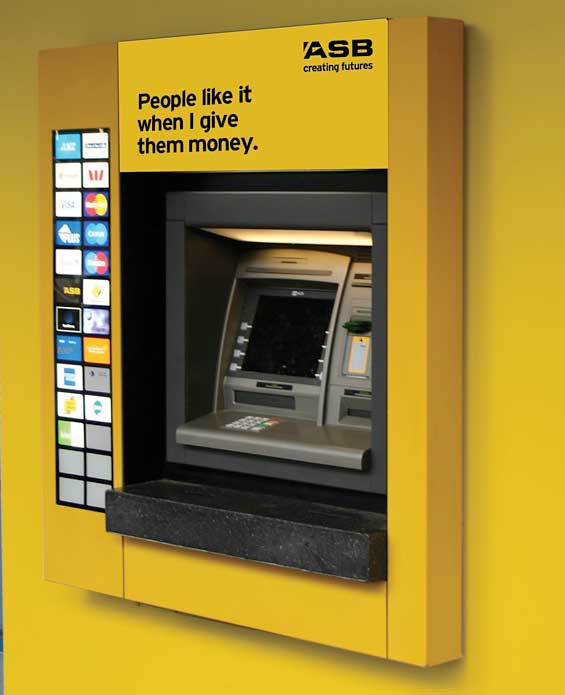 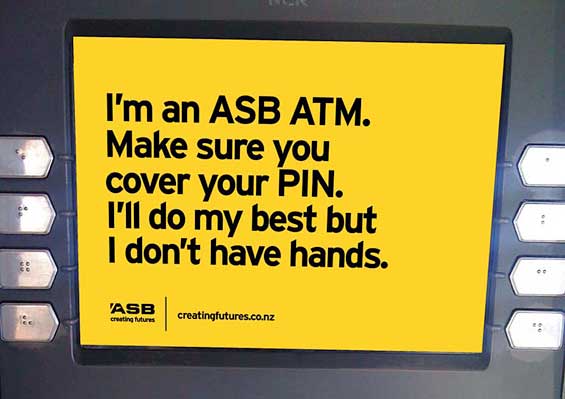 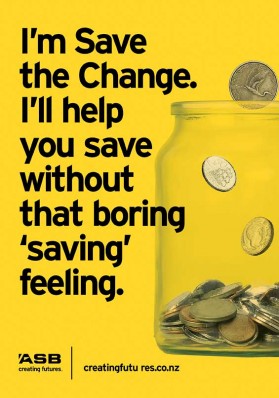 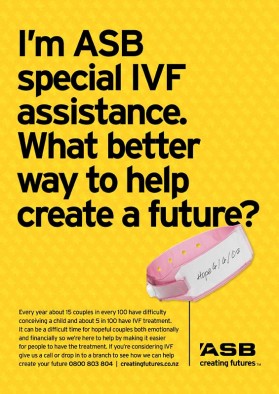 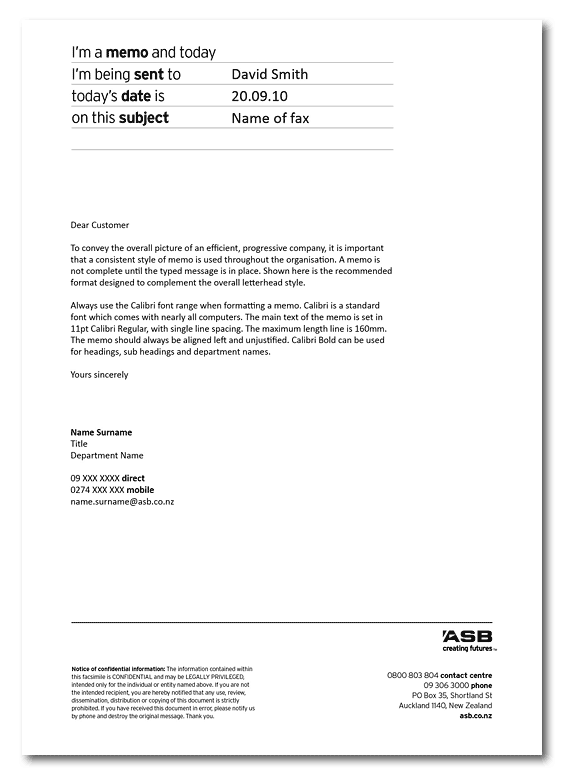 Even memos got a makeover. Notice the casual, personal style.