By Jeff Marsico, EVP of Bank Strategy, Profitability and M&A at The Kafafian Group

Credit unions were happy to pile on when banks came under attack in 2007. The onslaught of negative publicity continues, with recent headlines talking about how the Consumer Finance Protection Bureau is needed “to protect millions of Americans from sneaky banking practices.” Although all the public ire and media attention is focused on the very large banks, the negativity rubs off on smaller community banks, savings & loans, and savings banks as well.

The airwaves have been aflutter with news about how credit unions benefit their members, not stockholders. At the credit union, there are none of those insidious fees, they charge less for loans, and pay more for deposits — or at least that’s how the story typically goes.

I recently had a discussion regarding this bias with other industry consultants because as I was preparing for a meeting with a credit union client (my firm serves community banks and credit unions equally), I noticed something that didn’t wash with the standard credit union pitch. This credit union paid significantly lower rates on deposits than most community banks. I decided to look into it and dig a little deeper.

The first step was to find the necessary data. I searched my databases for all credit unions with total assets between $100 million and $10 billion. This narrowed the universe down to 1,387 credit unions. I matched the asset size criteria for banks and thrifts, but had to control for commercial lending, as credit unions can only lend small amounts to businesses. So I searched for banks/thrifts that had less than 15% commercial real estate loans, and those with less than 10% business loans. This yielded 322 institutions.

The deposit side matched up nicely, making a statistical determination on which group pays higher deposit rates pretty easy. According to my research, banks/thrifts have consistently paid higher interest on deposits than their credit union peers. This goes runs contrary to the story commonly told by both credit unions and the media.

I wanted to compare loan yields, but that’s a little tricky. However, I did note that banks/thrifts yielded 4.55% on earning assets for the first quarter 2011, whereas credit unions hit 5.02% for the same period. 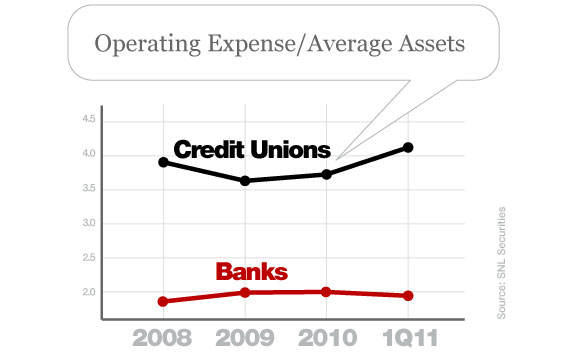 Suffice it to say that as a group, banks and thrifts pay their customers more for deposits than credit unions. Individual institutions’ may vary. 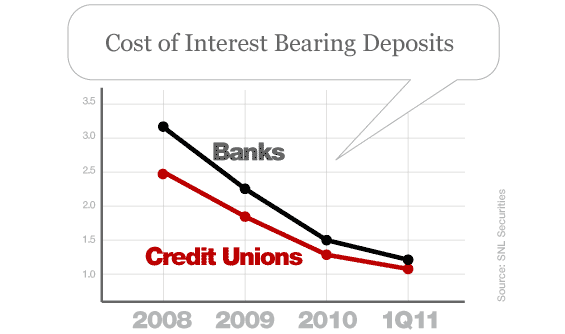 Banks and thrifts have materially lower relative operating expenses than credit unions. Bankers make noise about credit unions tax-exempt status all the time. But although CUs don’t have a “federal tax withheld” expense line item, their expenses tend to exceed those of banks/thrifts. Although credit unions don’t write checks to Uncle Sam, they make up for it by writing checks to others.

The relatively lower operating expenses of banks/thrifts allow them to pay higher deposit rates to customers.
The above charts may rub credit union readers the wrong way. But my experience with operating expense analyses for both banks and credit unions tells me there are plenty of areas where credit unions can reduce costs. For example, look at your recent core processor invoice and you are likely to find charges for components that are seldom (if ever) used, along with unnecessary “maintenance fees.” Reducing operating expenses would afford greater flexibility for pricing committees to pay higher deposit rates or charge lower loan rates.

While my research only stretches back three years, I would wager that looking back further would yield similar results. So why is it then that credit unions enjoy a reputation as being more generous than banks? In my opinion, it is the power lurking within the credit union brand. But undelivered brand promises usually backfire. They are unsustainable. If credit unions wish to continue basking in the glimmer of their brand’s halo, then they must define their brands to stand for something more than “higher deposit rates” and “lower loan rates,” especially since that doesn’t seem to be the case. Someday, someone may let the cat out of the bag.