If a financial institution could know that one of its customers just got married… Or had a baby… Or got divorced… Wouldn’t those life events create selling opportunities for that financial institution? If a bank or credit union could understood its customers’ life situations, wouldn’t they be able to market specific products and services centered around people’s unique needs? If only there was a way to figure out what was going on in people’s lives…

Technologists say it is possible — at least in theory — for financial institutions to link data available in social media profiles with marketing strategies and lending decisions. With the unprecedented volume of personal information people willingly volunteer on social networks, surely there must be a future for big, social data? Right? 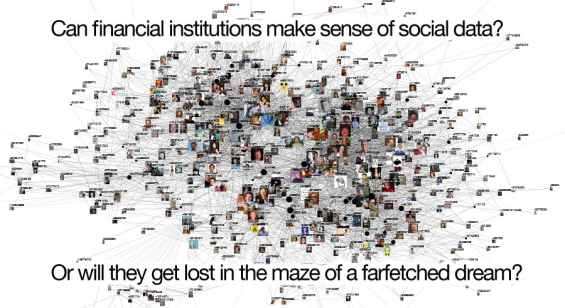 Before you dismiss the concept as one of those far-fetched sci-fi tales told by prognosticating futurists and other soothsayers, consider that online pioneer Lending Tree has been utilizing social intelligence in its decision-making process since at least 2009. The peer-to-peer lender incorporates multiple sources of social information into its identity verification and fraud detection systems.

And many organizations — not just financial institutions — are mining social media already to screen job applicants. There aren’t many hiring managers left who aren’t tempted to take at least a peek at the Facebook profiles of prospective employees. For instance, what if they find a photo of an applicant drunk at 3am with status updates containing racial slurs? Doesn’t that sound like a sure-fire formula for big HR nightmares?

What Banks and Lenders Can Look For

“Tweeting about walking away from your home may translate as an indicator that you may be delinquent on a future loan,” explains Ken Lin, CEO of Credit Karma, a free credit management service that provides credit scores and other financial education resources. “Banks are doing the math to determine whether these kinds of comments or tweets actually prove true down the road.”

In an article on Mashable, Credit Karma’s Lin outlines some of the things financial institutions might be looking for on consumers’ social media profiles.

Brett King, author of Bank 2.0 and founder of the recently minted Movenbank, says his nascent startup plans to integrate social data heavily into its business model. In terms of social intelligence what is he looking for? “Which customers have influence to drive positive sentiment or create believable influence?” he tells The Financial Brand.

For Movenbank, King has engineered what he calls the CRED ecosystem, “a behavioral, social, viral, gamified” platform.

The CRED system awards points, badges, rewards and incentives for behaviors like accomplishing a savings goal or referring friends to Movenbank. Movenbank will then use customers’ CRED scores to influence marketing, service and underwriting decisions.

“What we were really trying to do was change the way our bank communicates with customers about their relationship, and the way we assess their value to us as an institution,” King says.

The alpha release of Movenbank’s site will give customers their first glimpse of the CRED ecosystem, starting with a financial personality profile that users can compare with one another. Then Movenbank will ramp up CRED for commercial release sometime next year, with broad availability expected in summer  2012.

King also wants to get Movenbank customers involved in early design of products/services so that they “feel more attached to the result.”

“If we’re getting push back to a certain strategy — e.g., pricing or fees — how do we respond?” he asks himself. “Are we (Movenbank) prepared to engage in a dialog with customers openly and transparently, rather than just pushing our key messages or defending our brand?”

Of course, most banks and credit unions aren’t ready to throw away their traditional risk assessment models and rely instead purely on information gleaned from social media sites. But if they integrate social data as a component of credit worthiness, they may be able to see a more complete picture of potential borrowers.

Gregory Meyer, Community Relations Manager for Meriwest Credit Union, says social media is “a great way to keep up with my 10-year-old nephew, but it doesn’t have a place in the credit process.” However, he offers this concession regarding business loans: “I can see how Facebook would come into play. It would be useful to look at comments about a person’s business, see what the complaints are and how they respond to them.”

“This is an area that will need rigorous testing before you bet the farm on it,” cautions Netbanker author Jim Bruene. “But the theory sounds promising.”

There is more to social intelligence that just looking at isolated, individual profiles. Marketing inferences could be drawn from the interconnected relationships shared among the users of social media communities. For instance, if you lent money to ten people, all of whom are friends with one another (i.e., socially connected online), and they all paid you back on time, wouldn’t you feel better about granting a loan request from friend #11?

“Social graphs allow credit issuers to know if you’re connected to a community of great credit customers,” writes Erica Sandberg for CreditCards.com. “Creditors can see if people in your network have accounts with them, and are free to look at how they are handling those accounts.”

Movenbank’s Brett King has another idea. He talks about a situation where someone who brings in referrals might get a $500 line of credit. Even if they default, you’d have paid them that much for the referrals anyway, right?

But analyzing the vast pools of data in a social ecosystem by crunching the connections within a network will require radically new tools and technologies. The systems available today simply won’t cut it.

“The key to all this is combining together social analytics, which can deal with the unique aspects of social media with big data, which can process vast, real-time information flows quickly enough to matter,” notes Dion Hinchcliffe in an article on eBiz.

Big Brother Twists His Mustache, But Is It An Impossible Dream?

In response to Lin’s Mashable article, titled “What Banks and Lenders Know About You From Social Media,” reactions among commenters included “creeeeepy” and “scary.”

Robert Catalano is one consumer concerned that his Facebook Timeline posts might be used against him. His satirical fear: “Oh you want a loan…? Well I noticed that on Aug 4th of 2003 at 2:15 pm blah blah blah blah NOT APPROVED! Good day sir!”

Jesse Torres, President/CEO of Pan American Bank and publisher of the Social Media Banking blog, thinks mining social media data is a stretch for banks. “Perhaps one or two of the major banks may be scraping social media data (though probably not), it is actually quite unlikely and definitely not being done by the run of the mill bank,” Torres says. “It is just too much for them to handle.”

“The majors — BofA, US Bank, etc — have the resources, but it is not their core competency,” Torres adds. “They are not likely to be doing this at the macro level.”

Torres also sees issues with correlating online profiles with real world identities. “How do you know MrBigManOnCampus on Twitter is John Doe?” he asks. “How do you know which of the 150 John Does on Facebook are John Doe with SSN 123-45-6789?”

Ron Shevlin, a Senior Analyst with Aite, agrees. “The big issue is the validity of data,” he says. “There’s no way to verify information.”

On the wider subject of social intelligence, Shevlin thinks it’s impractical for banks and credit unions to even try and decode the data. “They have no ability to incorporate this kind of data,” he explains. “They can’t develop a systematic process to analyze social information.”

Nevertheless, folks like Credit Karma’s Lin maintain cautious optimism. “The earliest we’ll see banks and lenders begin to act is five years down the road, once they’ve had time to evaluate and correlate specific social media behaviors to actual credit risks,” he notes.

Could This Represent the Real Future Value of Social Media in Banking?

Maybe down the road, people will feel comfortable filling out loan applications on Facebook. If so, financial institutions will be able to correlate nearly every relevant financial detail to people’s social media profiles — the key to unlocking social data’s real potential.

If all the predictions pan out and financial institutions do wind up weaving social data into their marketing strategies, the industry will have probably be forced to reconsider the value of social media as a “tool for dialogue” — the predominant stance on its significance today. Should social intelligence deliver on the promise of its power, it would seem that a financial institution’s only real ambition on social networks would be to gain access to users’ data. To paraphrase, “Like us on Facebook, then authorize our app (a game? a free tool? an entry into a contest?) that grants us permission to analyze your friends and personal details.” Who cares if they post something on your Wall? You’ve got their info, and that’s what really matters, right?

Ten years from now, we may look back on all the hype about fostering “engagement” between banks and their customers as a quaint and naïve notion. “If we only knew then how we’d really wind up using social media today…”