Ally Bank, as a brand, didn’t exist 18 months ago. But since May 2009, when GMAC rebranded its online bank, Ally has gained widespread acceptance.

According to the latest data Ally Bank has available, 40% of the financial institution’s target audience is familiar with the brand. 29% say they know something about the brand, while another 27% report having a fair- to significant amount of knowledge about the bank.

How has the bank achieved these impressive awareness numbers? They didn’t do it with PR or flash mobs or social media. They did it with a good old fashioned advertising strategy that includes TV, radio, online and — gasp! — even print.

Ally spent $25.8 million on advertising in the first half of this year, on top of more than $95 million in 2009, according to Nielsen, a media research company.

While there are plenty of marketing analysts who have declared advertising is dead (some have been saying it for more than 10 years), Ally’s success proves the opposite. While advertising’s power to shape people’s perceptions or drive sales might be subject to debate, its ability to create brand awareness is indisputably alive.

There is a classic marketing acronym about how consumers relate to brands: AIDA. It stands for Awareness, Interest, Desire and Action. It’s a simple concept, illustrating the step-by-step lifecycle people take on their “path to purchase.” They won’t buy things they don’t want. They don’t want things that don’t interest them. And they can’t be interested in something they’ve never heard of. It all starts with brand awareness.

Reality Check: Rumors of the death of advertising are widely exaggerated. Yes, advertising is evolving and changing (e.g., the shift from print to online), but no advertising is not going away…ever. If awareness is your brand’s problem, then advertising is still the answer.

Can Consumers Really Love A Bank?

Starting in September, Ally began running a new ad campaign built around the love customers have for the nascent brand. In the campaign’s first TV spot, “Interview,” a young man on an interview tells his prospective employer about his life interests. 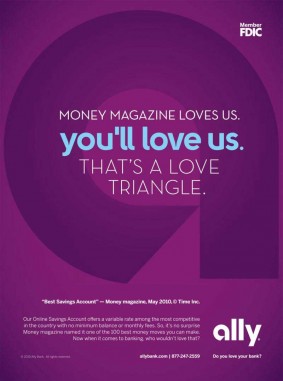 Job Seeker: “Well, I’m an avid catamaran sailor. I can my own homemade jam — apricot. And I really love my bank’s ‘Raise-Your-Rate’ CD.”

Announcer: “At Ally, you’ll love our Raise Your Rate CD that offers a one-time rate increase if our current rates go up. Ally. Do you love your bank?”

There are two other TV spots that play with this quasi-rhyming creative device, where people react with disbelief and incredulity towards the notion that someone can actually love their bank. In one spot, “Studio,” the lead singer of a death metal rock band sings about loving his bank, when his producer cuts in: “It’s not really raging, man.”

In “Rufus,” a woman’s date looks at her as if she was crazy while she asks her dog, “Who do we love? We love our bank.” She slips into goo-goo-ga-ga baby talk, “We lovve our bank, mmmm yes, yes baby.”

“The overall theme of the campaign is that you actually can love your bank, and our customers are proof of that,” said Travis Parman, Director, Community and Public Relations at Ally Financial. “Now that customers understand what Ally Bank stands for, we can reflect on the success we’ve had and the value proposition we offer. We will focus on what existing customers are saying they love about Ally Bank to reach out to those who haven’t tried us yet.”

“The new ads reflect the success of the bank and the sentiment we’re hearing from our enthusiastic customers — that we think its possible to love your bank given the right reasons,” the bank says.

Ally’s customer satisfaction statistics from July 2010 show that 90.8% of existing customers are “satisfied” or “extremely satisfied,” and 89.5% would recommend the bank to a friend or family member. Since the bank rebranded to Ally, it has seen an increase in retail deposits for six straight quarters.

“We hear from happy customers every day in social media and through customer service chat and phone calls,” said Sanjay Gupta, CMO/Ally Bank. “Our approach has clearly resonated.”

“Our positive customer feedback and interaction are proof that customers can love their bank,” Gupta continued.

“That someone can talk positively about their bank is unusual,” Gupta told the NY Times. “Most of the time, you don’t find that.”

The new approach is “perhaps not in the same vein” as the first campaign, he added, but it is “still allowing us to highlight key, salient points that make us different.”

Ally’s first campaign starred kids who were tricked and deceived by evil Mr. Disclaimer. Spots like the one with the girl who scowls when she doesn’t get a real pony and the boy who can’t play with the red truck have been viewed hundreds of thousands of times on YouTube.

But a few months ago, Ally decided it was time to bid adieu to the funny campaign.

“We want consumers to think about banking differently — more critically,” Parman said. “The previous ads highlighted what are typically considered pain points in banking and showed that Ally Bank doesn’t follow those practices. The new set of ads asks customers to think about whether they love their bank, and if not, why not.”

Ally, who has built its brand around themes like honesty and transparency, ran into trouble earlier this year when the bank stood accused of robo-signing foreclosure documents. Did the bank dump its former campaign, which portrayed banks as deceptive cheaters, in reaction to its potentially fraudulent foreclosure practices?

“No, there is no correlation. As you know, it takes months to develop a new campaign,” Parman said.

Ally’s previous campaign had received some criticism for its treatment of children, but the bank denies any connection with decision to roll out new ads.

“The positive reception to those ads heavily outweighed any negative comments we received,” Parman said.

Ally also says it is not replacing its “Straightforward” tagline with the current campaign slogan, “Do You Love Your Bank?”

‘”Straightforward’ is a brand pillar of Ally Bank and a philosophy that you’ll see demonstrated in products and service and will remain as a guiding theme,” Parman told The Financial Brand. “’Do You Love Your Bank?’ is the theme of this ad campaign and not the new slogan.”

The new campaign, created by ad agency Bartle Bogle Hegarty, will push the “love” theme out across TV, radio, print and the web. Online ads will include actual customer comments about their positive experience with the bank.The new campaign, is scheduled to run into early 2011, but there is no firm timeframe for its duration.