Subscribe Now Get The Financial Brand's FREE Email Newsletter
Many couples would rather talk about almost anything but the household finances, even when they've barely started out. Ally Bank applies its customary humor to this ticklish consumer challenge with a marketing campaign with interactive features including a trio of 'date night' financial discussions.

The heart and the wallet aren’t necessarily talking to each other when people cross paths with their future spouse or significant other. Even after a couple comes together, a full-scale sharing of each person’s attitudes about spending, saving, borrowing and investing often doesn’t happen. The result can range from whimsical episodes to serious consequences when a couple doesn’t have a shared understanding about money.

Research by Ally Bank indicates that most adults say being open about finances is critical, but nearly half of those surveyed who are in a relationship admit they have not had “the money talk” yet or don’t talk about their finances effectively.

“Money has always been such a culturally sensitive topic, and our finances are closely tied with our emotions,” says Andrea Brimmer, Ally Chief Marketing and Public Relations Officer. “Whether it’s because you don’t know your habits, or maybe had bad ones in the past, getting on the same page about how you approach your money decisions is key to building a happy future together.”

Ally debuted a multi-pronged campaign designed to encourage the dialog that many couples fail to have or fail to maintain through regular talk about finances. 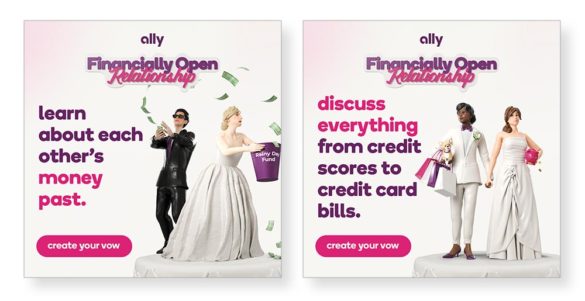 “Just being open is helpful, and that is a great place to be in a relationship,” says Brimmer.

Constant Give and Take:

61% of “financially open” couples discuss their money affairs weekly or even daily, according to Ally Bank research.

The bank’s campaign blends Pinterest and Instagram posts by the institution and by paid influencers representing both traditional and same-sex couples to promote Ally’s digital efforts to promote better financial communication. The program is referred to as “Financially Open Relationships.” 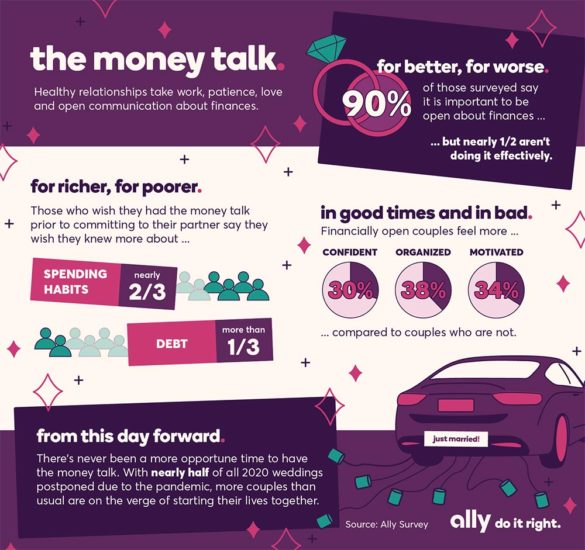 Ally’s research reports that financially open couples feel 37% more confident, 34% more organized and 26% more motivated compared to couples who are not talking about money. In fact, the survey found that couples who avoid the money talk tend to report feeling frustrated 27% more often and worried 25% more than couples who communicate. Many who aren’t talking about money also tend to feel overwhelmed by their finances.

Nearly two-thirds of people surveyed wish they knew more about their partner’s spending habits before committing to them.

Views on sharing information and thoughts on finances in a relationship can differ by gender. Among other findings:

Partners or spouses may or may not be clear on where their significant other stands on key matters. The bank’s campaign includes a whimsical “Financial Vow Generator” to help open things up. The online generator uses a short series of questions to identify the basics of each partner’s attitudes about spending and saving, somewhat along the lines of the “Mad Libs” games.

The responses, along with some randomized funny verbiage, are factored into a financial vow for the couple. The sample below concerns a real-life couple. The husband can’t pass a tool store or home center without buying “must have” gadgets, while the wife, more of a saver, still likes to order books now and then. The resulting vows: 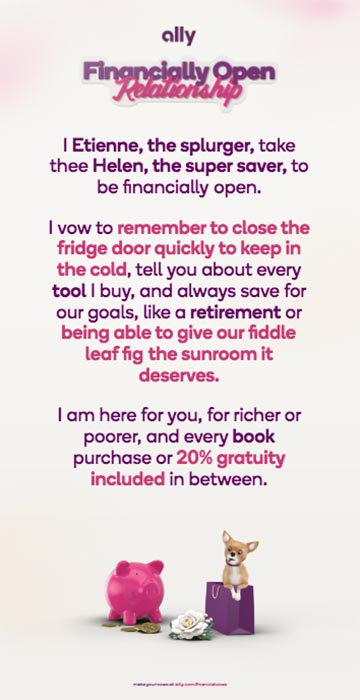 “We’re targeting a broad audience of consumers at different ages and stages in their relationships for this campaign,” says Brimmer. “The Financial Vow Generator isn’t just for newer couples. It’s fun for people who have been together for a while, too.”

Besides its own social media promotions for the campaign, the bank also tapped a variety of Instagram influencers to publicize the campaign among different groups.

“We worked with our agency partners to identify a diverse set of influencers that align with our values and which would resonate with the audience authentically,” says Brimmer.

If the campaign left off here, it would be a clever idea that might spark some improvement in couples’ communication or which might end with a few smiles and no change.

Brimmer says the bank wanted to do more than that.

“We want consumers to feel empowered to make financial decisions, and that’s why we build our products and services around customer needs,” says Brimmer. “The more the industry focuses on helping people navigate their finances simply and smartly, while educating them about decisions along the way, the better off everyone will be.”

So, the followup to the vow generator is a series of three “date nights” where Ally has set the agenda for a serious but friendly discussion about money. The first two activities are interactive.

The first date night, “Would your rather?,” consists of a series of 18 questions, each with a choice of two alternatives. It’s designed to see where each partner’s attitudes synch and where they differ. For fun, after each partner completes the questions, they are given an overall label. For example, someone who gives a lot of edgy answers is called “The Experientialist.”

The second night, “Can I get your number?,” asks a series of 15 questions that all come down to a number — what percentage do you like to tip, how much would you be willing to spend on streaming service and more. After each answer is selected the respondent can compare their answer to all who have participated and a complete report on all replies is given for the couple’s comparison.

The third and final night, “Create your happiness list,” differs in that the couple downloads a PDF form. It’s literally an opportunity to write down what makes each partner happy, with the advice “Don’t overthink it!”

“Creating your happiness list can help you define what is valuable to you and what is most worth your time and money,” the bank’s date night page states. “By sharing it with your partner, you can better understand what will bring you long-term joy together — and you may discover areas where spending less won’t feel like such a sacrifice.”

Bringing Things Back to the Bank

From the date nights, couples can segue to considering various relationships with the bank by clicking on a button that says, “Learn About Combining Finances at Ally.”

On the landing page, some general advice for followup discussion appears. The page also features an interactive table that discusses how various relationships can be set up with the bank. Among the options are joint accounts; living off one paycheck and saving the other; dividing expenses based on income; splitting household expenses but paying one’s own bills; and keeping everything separate.

“Everyone’s financial situation is different,” says Brimmer. “Life costs money, we can’t change that. But we can help empower people to make good financial decisions for their future.”