Subscribe Now Get The Financial Brand's FREE Email Newsletter
Clever series of video spots contrasts yesterday's banking channels with today's online and mobile avenues. The backstory is that the spots had to be produced entirely remotely as COVID-19 barred the creative team and client from working in proximity.

Maybe the only thing more glacial than writing out a check by hand these days is watching an anthropomorphic $50 bill struggle to hold a pen long enough to make out the check.

“This is the story of two bills,” says the narrator for Ally Bank. “One is used to things being hard. [This is the old dumb $50, trying to write the check.] The other has found a smarter way. [The clever $50, using photo deposit service.]”

The idea of the main spot and its three shorter associated commercials is to show how the “smart money” is on digital banking services. Of the other spots, one focuses on obtaining a mortgage in the modern way, and the others look at digital investment services. All feature characters made of real U.S. currency manipulated by professional puppeteers.

Old dumb money tries to sign a check, new smart money goes all digital, in main spot in Ally’s “Do it right” campaign.

In a series of video spots that began running on television and online during the COVID-19 pandemic, the “Doing it right” series shows how digital alternatives to clumsy old ways of doing banking are what smart consumers are using.

“Affluent Millennials are our typical key target audience,” says Andrea Brimmer, Chief Marketing and Public Relations Officer for Ally Financial. “With social distancing being a part of the new normal, consumers of all demographics are now more open to digital-only offerings. Digitally oriented brands have a huge advantage as consumers now have experienced the ease and utility of transacting with us.”

During Ally’s third-quarter 2020 earnings call CEO Jeffrey Brown noted that, “Two-thirds of account openings continue to be sourced from younger generations, and the vast majority of inflow still comes to us from traditional banks, plus practically no outflows to neobanks.”

The ads continue the visual approach of an earlier Ally campaign that featured “lazy money.” In that effort U.S. bills were seen taking it easy — aimlessly channel surfing, having a lazy and sloppy breakfast, turning over for more shut-eye when the morning alarm rings, and savoring a leisurely bubble bath while the owner is hard at work. The tagline was “Is your bank letting your money be lazy?” and was used to promote Ally’s digital money management tools.

The new spots — two can be viewed in their entirety below — show bills devoting massive efforts to put together financial documents by “hand” to submit for a mortgage application, versus going about it with a smartphone using an Ally app. Another shows a bill trying to figure out its investment portfolio by perusing the stock market tables in a newspaper. Another shows a bill using a coin to play a scratch off lottery ticket, in hopes of striking it rich, instead of investing easily and intelligently in the Ally app.

Getting Creative Via Zoom and Internet Connections

The new ads use no computer-generated imagery at all. Instead, Ally hired professional puppeteers working out of Prague, in the Czech Republic, to manipulate a selection of U.S. denominations to act out both the dumb and smart scenarios.

The catch was, everything about the shoot had to be done remotely, according to Brimmer.

“We had to get really creative about how to shoot it and bring it to life,” explains Brimmer. “A big part of the magic of production is being together on set, working hand in hand with our agency and production partners. However, we weren’t able to travel right now due to COVID-19.” 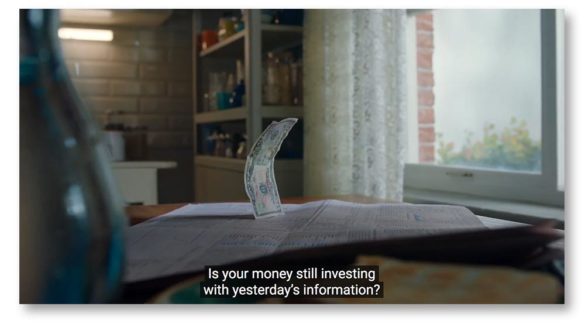 Old dumb money gets lost in the stock pages of a print newspaper. In the full spot the new smart bill works with the latest information using Ally’s app.

The alternative — in a sense fitting, given the ads’ subject matter — was a combination of digital channels.

“Luckily, we were able to navigate a smooth remote shooting experience, replicating video village discussions via live stream, Zoom calls and text message chains,” Brimmer explains. “Our agency partners developed multiple communication streams to ensure we could keep lines open for discussion, review and give feedback on work in real time.” (In film terminology, a video village is an area on set where the director and other crew members can watch takes as they are being shot.) Members of the team participated from New York, Charlotte, N.C., and Detroit.

While nothing is like being right on a shoot, she adds, “We were able to capture everything needed while keeping spirits up in a collaborative environment.” Considerable time was spent in rehearsals to make sure the puppeteers captured relatively lifelike poses on the day of the shoot.

Brimmer says that while the remote experience amplified the need to be overly prepared, “the emphasis on additional rehearsals was a sound investment and something we would continue to employ for future shoots.”