Subscribe Now Get The Financial Brand's FREE Email Newsletter
A steady diet of ads with 'humor and a little irreverence' has helped propel growth at Colorado-based FirstBank for over a decade. The bank's marketing chief and the creative director of its ad agency, TDA Boulder, reveal the secrets to a successful partnership and share tips other financial providers can use.

Colorado’s FirstBank may be the only financial institution to ever receive a standing ovation at a major league baseball game.

It happened at a Colorado Rockies home game during the financial crisis when megabank CEOs were flying in their corporate jets to Washington to testify before Congress.

The bank’s then-new ad agency, TDA Boulder, suggested doing a banner ad to be towed around the stadium by a small plane. The banner, sporting the bank’s logo and signature orange and white colors, read: “This is the closest thing we have to a private jet.” (See image below.)

The agency pulled the banner together quickly to capitalize on the raft of headlines and TV coverage about big-shot bankers in their private jets. “Everybody understood what the banner meant because they had read the headlines,” says Dave Fisher, FirstBank’s President of Marketing. He wasn’t head of marketing then, but everyone at the bank knew about the banner.

FirstBank's ads are not all tongue-in-cheek, yet they've established that tone over many years and it gives them an authentic and distinctive voice that stands out.

That was the beginning of a remarkable 15-year partnership between the bank and the TDA Boulder that has produced some of the most distinctive and creative bank advertising and marketing in an industry not noted for standout creativity.

A few years later, the bank and agency threw caution to the wind again placing an ad on an enormous billboard right across from the University of Phoenix Stadium where Super Bowl XLIX was being played. That was 2015, the year of the “deflategate” scandal in which Tom Brady and the New England Patriots were accused of deliberately underinflating footballs during a playoff win (later debunked).

FirstBank does significant mortgage business and has branches in the Phoenix market. It surmised the billboard, which read, “Deflate mortgages, not footballs” would be picked on national television coverage of the game. “Everybody understood it,” says Fisher. “It was timely and relevant.”

Not Afraid to Be ‘Memorable’

Playing off headlines in sports venues is just one part of an impressive body of work from the bank and its agency partner. Below is a sample of some of the bank’s campaigns. These are mostly out-of-home examples, but the bank utilizes every possible channel depending the type of campaign. 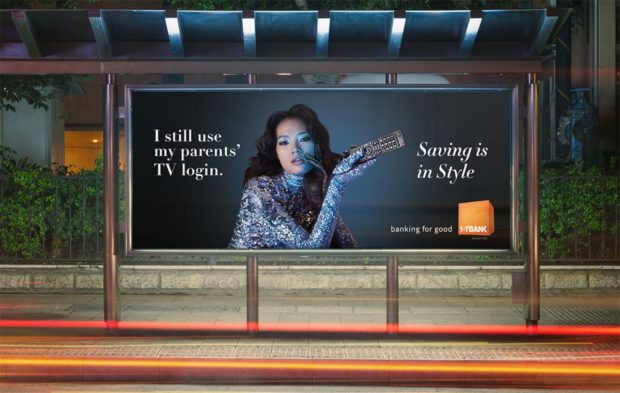 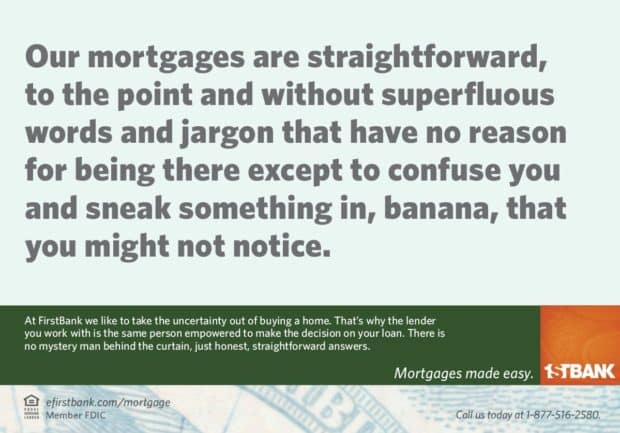 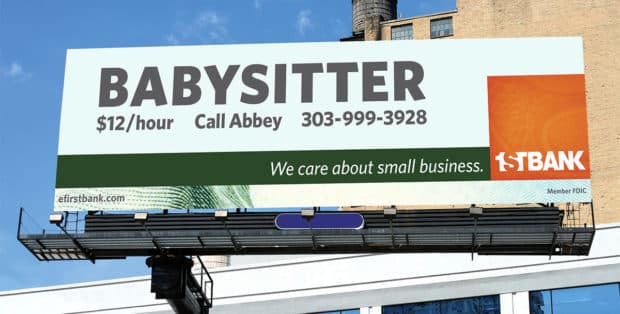 The Financial Brand caught up with Dave Fisher and Jonathan Schoenberg, Executive Creative Director/Partner, TDA Boulder to explore what makes a great bank/agency partnership, why the bank is willing to be different — and sometimes a little in your face — not something many financial institutions would do. They also share some specific bank advertising strategy suggestions.

A Different Kind of Partnership

“Our tagline is ‘Banking for good,’ and we have a tremendous amount of trust in their ability to bring that tagline to life in the ads that they run,” Fisher states.

That trust didn’t happen right out of the box, however. FirstBank CEO Jim Reuter, said during a presentation at The Financial Brand Forum that the bank’s advertising had been “very straightforward and down the middle” until they brought in TDA Boulder. Initially, he said, “we said ‘no’ to 50% of their ideas. We said, ‘We’re a bank and we can’t do that.’ But eventually we got our courage up and took a little more risk.”

“Humor and maybe some irreverence is part of our secret sauce. It’s working wonderfully for us and it’s something that we embrace.”

The bank’s change of heart led to saying “yes” to offbeat ads like the 2019 TV campaign for “service that’s almost too good to believe.” In one spot (below) a husband who has been turned into a hedgehog by a witch greets his wife at the door, but she’s more surprised by the great service she just got at FirstBank than the fact that her husband is now a small talking animal with sharp spines.

Asked what sets FirstBank apart, Schoenberg observes that first of all the bank is authentic. Even now at $28 billion in assets and 100-plus locations in Colorado, Arizona and California, the bank remains a community bank at heart.

“Even before ‘Banking for good’ was their tagline, it was like a mantra,” he says. “We saw how when a decision was being made someone in the room would say, ‘Is this the best thing for our customers?’ They’re a different kind of bank to work with — not a bunch of robots. They’ve been very successful by doing the right thing.”

Schoenberg adds that the agency has unusual access to the bank’s C-suite, which really helps build mutual understanding.

Bankers are as human as anyone, yet the business of banking comes across as cold and its products can be seen as complex.

From the start of its partnership with the bank, TDA Boulder has sought to add humanity to FirstBank’s image. As described above this wasn’t just about applying a smiling face over a sub-par reality.

“If I tell you to trust me, you’re not going to trust me,” Schoenberg maintains. “But if the bank can have a conversation with the consumer that engages them, makes you memorable, then, hopefully, the bank comes ‘first to mind’ and seems like a company people can relate to.”

“Banking is intimidating, from a child opening an account to somebody applying for a loan. We want to diminish that intimidation factor.”

FirstBank’s mid-2022 mortgage awareness campaign goes right after people’s feeling of intimidation about banking. It taps into and disarms the nervousness consumers feel about buying a home and taking out a mortgage, Schoenberg states. It pairs with the fact that FirstBank differentiates itself in the mortgage market by emphasizing its staff will stick with you right through the whole process. 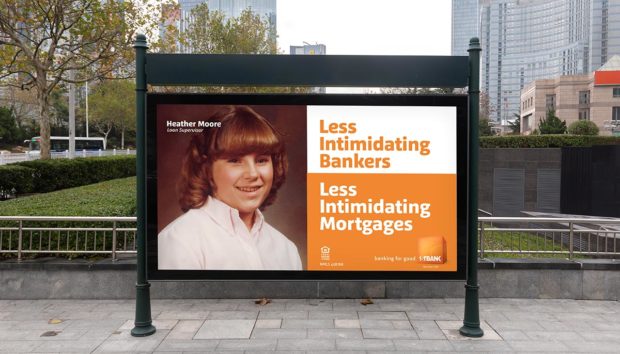 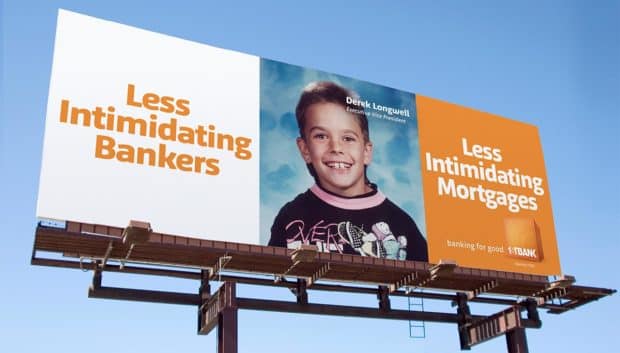 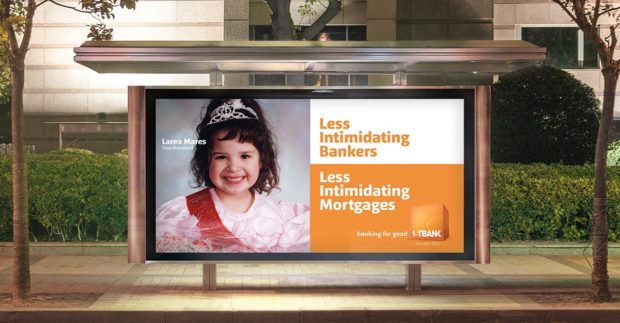 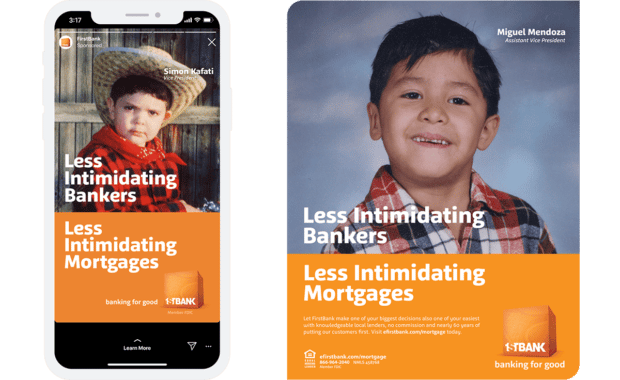 “I think of FirstBank as being very friendly,” says Schoenberg. “And I think these mortgage ads are very friendly. Also, I believe showing is better than telling. If we told people we have great customer service and we’re not intimidating, they aren’t going to necessarily believe us.” These ads, however, demonstrate that visually by showing funny, disarming pictures of bankers as kids, he says.

Fisher says it took a couple of “casting calls” to get enough people to be willing to put their faces on billboards and mobile ads. “They were a little nervous and thought they might be embarrassed,” he says. “None of that happened. It was just about making people human beings.”

In fact, the participants are glad they did it, Fisher states. One of them told him that every time his kids see their dad’s picture on a billboard, they think, “Dad’s a rock star and it’s just pretty cool.”

By this point readers may think, that’s all great, but do these humanizing mortgage ads meet their goals? Fisher’s response is that it’s a top-of-funnel awareness campaign leveraging traditional media plus social and digital, so it’s tough to quantify a direct correlation. But the lower-funnel metrics that they look at have been quite positive.

“We’ve seen leads to our mortgage landing page increase pretty substantially year over year while the campaign was running, he states. In fact, Fisher says FirstBank has seen their market share (in dollars) of mortgages and home equity products originated move from fifth in 2021 to third in 2022.

Overall, FirstBank’s growth has been impressive during the time it has worked with TDA Boulder. Total deposits in 2010, not long after it began working with the agency, were $9.5 billion. In 2020 they had increased to $21.9 billion — organically.

TDA Boulder does plenty of serious campaigns for FirstBank, but still, Schoenberg says, “I think our best work [for the bank] that’s really engaged most with the consumer is probably lighter.”

Schoenberg shares a few observations related to the use of humor in advertising.

Humor is hit or miss, he says. What one person finds funny another doesn’t. Referring to the billboard ad for the babysitter shown above, he says, “To me that isn’t funny. It’s thoughtful almost.”

The agency’s new out-of-home ads for FirstBank’s business customers, shown in the below examples, likewise are not funny, but more tongue-in-cheek. 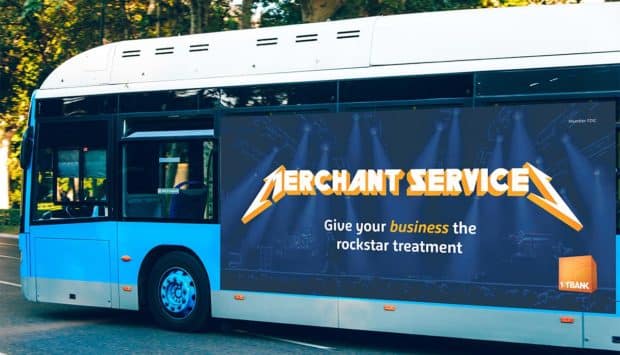 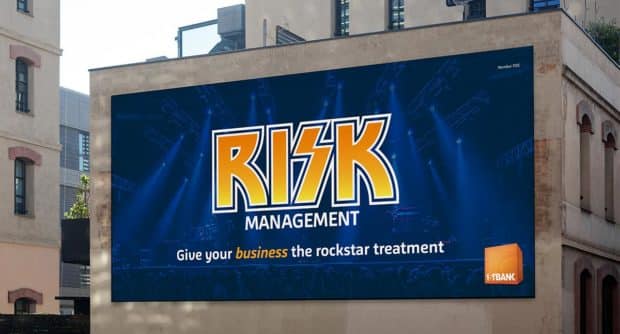 “I don’t always think that ads should make you laugh,” Schoenberg states. “We all have friends that are funny. But if you’re always trying to be funny, you’re not that funny.

“With the bank’s mortgage campaign showing photos of staff as kids, I would never laugh out loud at that, but I’d look at it and engage with it because I wouldn’t expect to see somebody’s embarrassing third-grade photo in a bank ad.”