Subscribe Now Get The Financial Brand's FREE Email Newsletter
A review of over a dozen creative ideas and marketing projects from banks and credit unions around the world.

The Medium Is The Message

“This bus passes by 14 banks. And for good reason.” Haha! Now that is good outdoor advertising. Why? Because all the most effective and memorable outdoor advertising incorporates some aspect of the medium into the concept. In this case, PFCU elegantly uses the bus as its marketing vehicle (yuk, yuk). 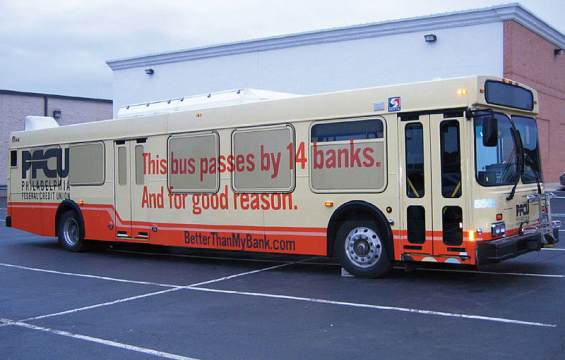 Here are two more excellent examples further illustrating the powerful relationship between that can be forged between outdoor marketing messages and their environmental context. In the first example from Palmetto Bank, you have to look closely to realize that it is actually a branch entrance in disguise — visitors have to walk right through the bank’s mobile app (quite a metaphor, if you think about it). The copy off to the side says, “You’re welcome to come in, but you won’t have to with our mobile banking app.” Touché! The second example from Postbank uses sidewalk chalk art to mock the pop culture expression, “Kilroy was here.” 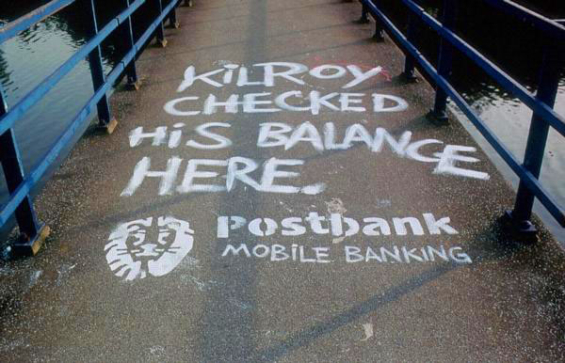 KeyPoint Credit Union asked commuters to fill in the blank: “My bank is full of _____ .” It’s bus ads like these that drive bankers do nasty stuff like this.

HSBC proves that every touchpoint in banking can be fun and engaging, even something as mundane as an ATM receipt. On the backs of their receipts, HSBC printed instructions for hold to fold the nearly-square piece of paper into an origami shape — a car for insurance, a pig for savings accounts, a mouse for internet banking. HSBC is promoting its products in a way consumers actually enjoy — something seldom seen in banking, but indeed possible. 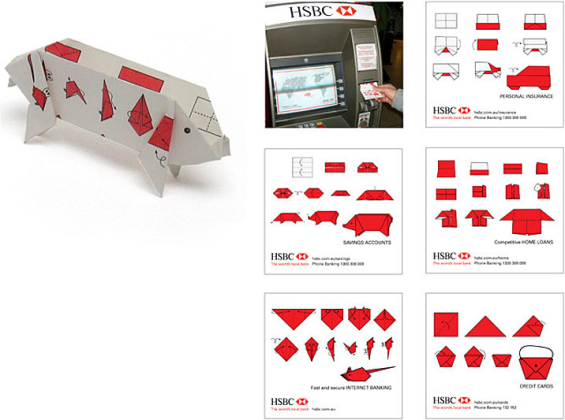 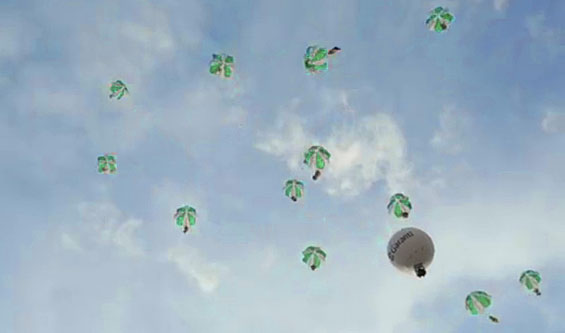 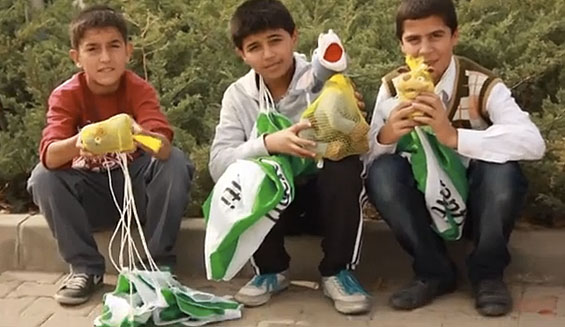 So Close, You Can Touch It

A bus shelter in Canada cleverly branded by Scotiabank. The rather standard and unremarkable poster says talks about getting cash-back rewards. The shelter’s other two walls, however, are made from dollar bills encased in unbreakable glass. Marketers, listen carefully: Nothing captures consumers’ attention quite like cold, hard cash. Don’t be bashful about your connection to currency. No one can resist even the most obnoxious or vulgar displays of money. 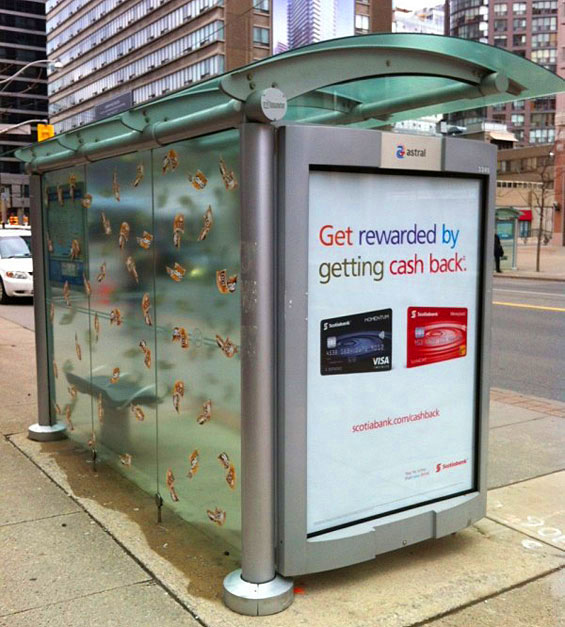 This outdoor ad from PNC Bank is “environmental” advertising — quite literally — at its finest. PNC has been positioning itself as an eco-friendly financial institution for many years now. They even hold a trademark on the term “green branch.” So this lush, verdant billboard is not only eye-fetching, it’s on-brand. 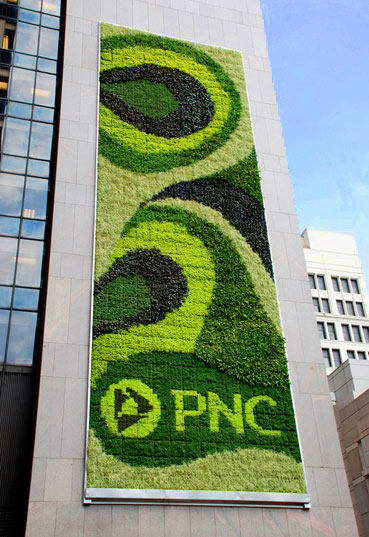 Like many bank ads, this series from First Community Bank emphasizes the “service difference,” but does so without resorting to trite clichés and overused metaphors. If you want to position your financial institution as “more personal, approachable, warm and friendly,” this is a fresh way to go about it — not one single generic stock photo of a smiley, happy person. 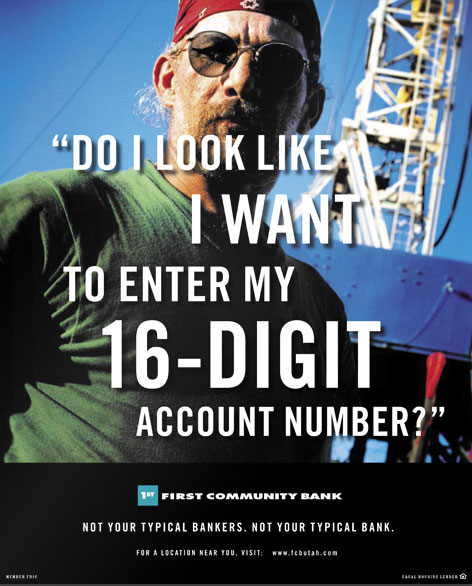 In Order to Form a More Perfect Union

Banks and credit unions are like oil and water; they just don’t mix. Usually these two factions of the financial industry are too busy hurling insults at each other to find any common ground. But Bancvue managed to get 65 executives from U.S. community banks and credit unions to set aside their differences long enough to cooperate on a big Fourth of July ad for free checking. This full page “Declaration of Free Checking” in the July 2nd edition of USA Today bears each of their signatures, reminding consumers that community-based financial institutions still offer accounts with no monthly fees. The ad is part of a national campaign Bancvue markets under the Kasasa brand. 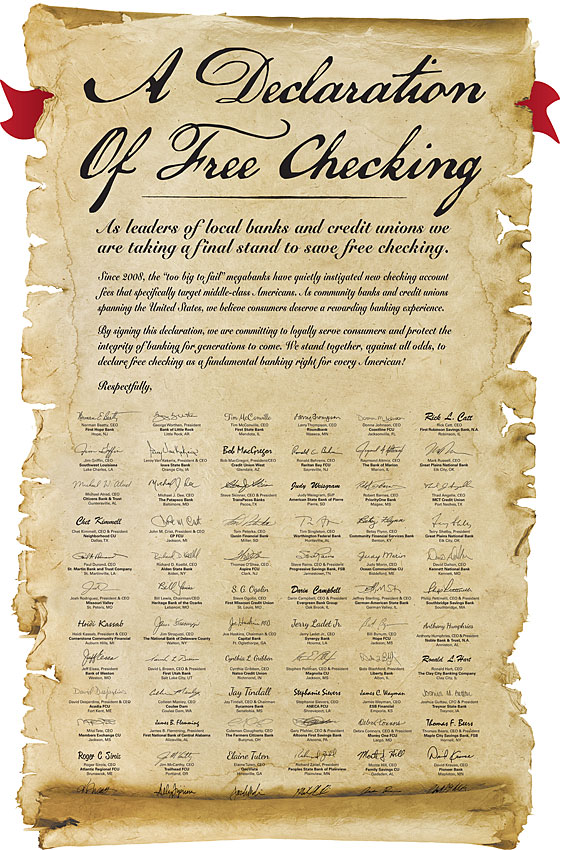 The Award for The Worst Ad Placement Goes To…

Ulster Bank suffered through a painful and prolonged series of website failures in early 2013. It was well-publicized, and it wasn’t pretty. Nevertheless, the bank continued to let its ads run, including the ironic gem in the online screenshot below. The article is about Ulster Bank’s IT issues. Immediately to the right is an online ad for… Ulster Bank. The button on the ad says, “Start saving with us today.” Do they mean it’s easier to save money when you can’t access it online? Whenever you have any catastrophe strike your financial institution, you should push the pause button on all your ad campaigns immediately. If your website has a major meltdown, pull your ads. If your area is hit by some kind of calamity like a natural disaster, pull your ads. If your CEO gets arrested, pull your ads. Don’t waste your money on marketing that has a 0% chance of success. Concentrate on fixing the problem first. 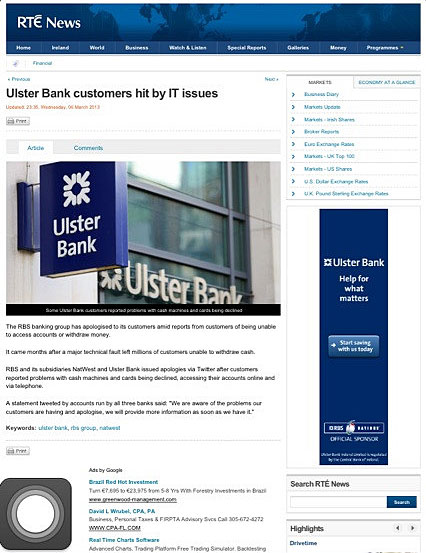 A Better Rate Is Not “Differentiation”

The implicit message in this ad from NAB is that all banks really are the same, except for one thing… their rates. This ad is both tragic and ironic, because NAB actually has one of the world’s most unique financial brands, but the message is almost 180 degrees in the opposite direction. Instead of focusing on brand-level differentiators, NAB is reinforcing the perception — one that’s widely held by both consumers and bank staff — that “rate is everything.” 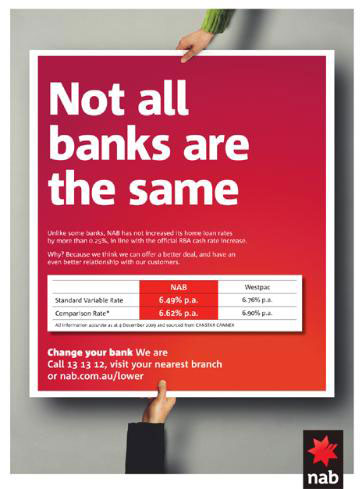 Is It Possible to Love a Bank?

The Bank of Queensland thinks it is indeed possible to love a bank. The bank rolled out a series of four cartoonish TV spots celebrating the “more personal approach” BoQ takes with customers. One commercial shows a hunter holding hands with an 8-point buck — a pairing that alludes to the mutual contempt banks and consumers seem to have for one another. People hate banks so much, you have to wonder if they’ll swoon over this “more personal” promise. The agency certainly loves its “Love” campaign; we’ll see if the public agrees.

Mitts Off – The Pens Are Ours!

“We’re not big bank,” the billboard says (is the “a” missing from that sentence on purpose?). But this ad from Chesapeake Bank has the bitter flavor of big banks. They tout their generosity and value by promising “free checks for life” — who needs those? Besides, haven’t consumers been trained to expect free checks? Apparently Chesapeake Bank’s benevolence has its limits though, as the billboard reminds people that the pens aren’t free. It’s an odd, contradictory ad message, particularly in light of how many financial institutions gleefully shower consumers with free writing utensils. TD Bank even made an entire ad campaign anchored around free pens. 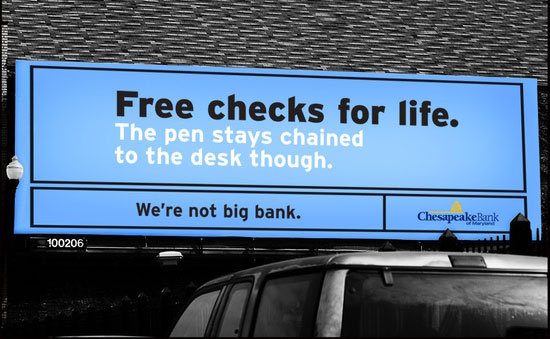