Subscribe Now Get The Financial Brand's FREE Email Newsletter
The 5th annual analysis of marketing in the financial services industry reveals bank and credit union strategies, priorities and challenges in 2016 — data analytics and measurement are behind the times, movement to digital communication is slow and branches continue to be built.

Now in its fifth year, the “State of Financial Marketing” survey, fielded by The Financial Brand, sponsored by Deluxe, and analyzed and published by the Digital Banking Report, provides unparalleled insights into the priorities, challenges, product focus, communication channel use, social media use, budgeting allocations, marketing effectiveness. The report even looks into branding and branching trends and how marketing is viewed by the C-suite.

Those who completed this year’s survey will receive a complimentary copy of the “2016 State of Financial Marketing” Report. The 56-page report breaks down dozens of trends — who’s doing what, spending more, in which channels and generating results. The full survey analyzes over 30 different parameters and includes 38 charts, segmenting respondents by size and type of organization (national/regional bank, community bank, credit union).

For those who did not participate in the study, but would like a copy of the report, it is available for immediate download upon purchase here.

The report is based on a Q4 2015 Financial Brand survey of senior marketing executives at 257 financial institutions (FIs). Among survey respondents, 14% were from large national or regional banks, 39% were from community banks, and 43% were from credit unions. 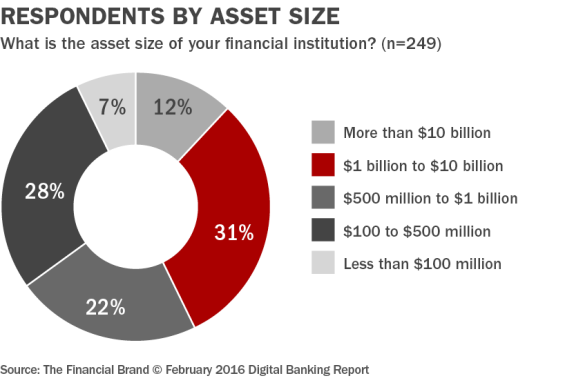 Four out of five of the responding institutions were from the US, with 7% being from Canada and slightly more than 10% coming from other countries.

Below is a small sample of highlights from the 2016 Financial Marketing Trends report.

Over the past five years of The Financial Brand marketing survey,most of the priorities have remained rather constant. The most evident areas of change during this period were the increase in importance of ‘reaching a younger audience’ and the decrease in importance of ‘building a brand.’ For the largest organizations, ‘increasing adoption of digital channels’ and ‘improving analytics’ have become top priorities.

Increasing share of wallet (i.e., deepening customer relationships) is the most important marketing priority (49%) in 2016, with loan growth being a very close second at 48%. The three most frequently cited priorities – improving wallet share, growing loan volume, and acquiring new customers – have remained the top three priorities for the past four years.

Other highlights of significant priority variance by type of institution are the following:

Despite ongoing conversations regarding moving from a product silo marketing perspective to a consumer-focused marketing model, most organizations still budget and build strategies around products. Of deeper concern is the stability in emphasis year over year, possibly indicating a planning process that only makes slight adjustments to prior year’s plans as opposed to conducting deep consumer needs analysis.

Mortgage loans and refinancing continued to be the most frequently listed product to be marketed in 2016, with 64% of the respondents indicating this emphasis. Mobile banking solutions was the second most mentioned service with 61%, while three other credit services (home equity, credit cards and auto loans each were mentioned by 4 in 10 financial organizations.

While not showing up in the combined rankings, mobile wallets (Apple Pay, Google Pay, etc.) and P2P services are being more heavily promoted in 2016 by larger financial institutions than by other sized organizations. This is consistent with the higher focus on mobile banking found overall with larger banks. 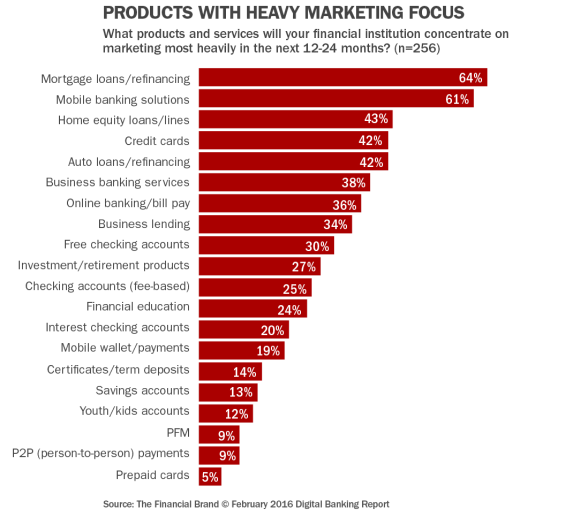 Social Media Use Increases … Despite Lack of Effectiveness

Counter to logic around generating a return on marketing investment, marketers surveyed did not seem overwhelmingly confident in the effectiveness of any of the channels they use. While the terminology of the question leaves room for interpretation, only Facebook had greater than a 20% “very effective” score. The effectiveness of Facebook was down slightly from 2015.

While the study shows that the use and effectiveness differs by institution type and size, the question needs to be asked why banks and credit unions are spending more and more budgets on channels that don’t generate a known marketing ROI.

The branch survival debate rages on, with the mobile channel continuing to gain ground with banking consumers, while physical branches remain central to the retail delivery strategy for most institutions. Our survey reinforces that the branch is far from dead at most institutions. 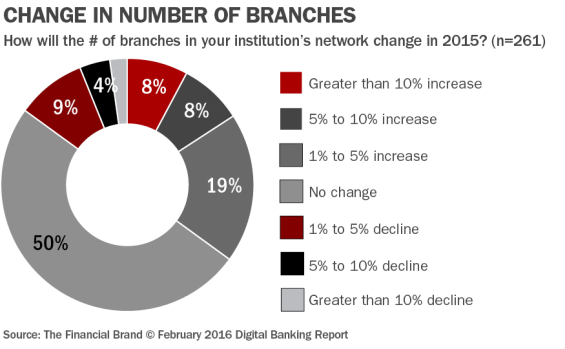 When we look at the changes in branch distribution by asset size, there is a bell curve with the top of the bell curve being the “no change” category (especially with the smaller institutions). Similar to 2015, the smaller institutions (under US$1 billion) were more likely to be increasing their branch network, most likely to expand branch network footprint or to serve current customers (members) better. There can be a debate if the goal of increasing market share or customer service could be better served by redeploying new branch build funds towards improved digital applications.

For the foreseeable future, banks and credit unions will continue to shift more and more of their budgets away from traditional and offline channels and towards online and mobile media. The question remains whether this shift is occurring fast enough and whether the results of these efforts will be measured accurately.

This year’s survey also found a very high percentage of financial institutions did not set “improving data analytics” as a high priority, and an equally high number of organizations are “concerned about establishing an accurate marketing ROI.” As a greater commitment to digital channels occurs, the lack of commitment to use data to target effectively and the inability measure results could result in a perfect storm of ineffectiveness and inefficiency.

Time for a Strategic Planning Reset

There is evidence that most financial institution executives understand the digital transformation that is occurring in banking and the ramifications of increased consumer expectations and increased competitive pressures. Despite this understanding, many banks and credit unions have not made significant changes to their marketing strategies to adequately address the changing consumer and competitive landscape. When we look at trends over the past four years, most institutions seem to make only small adjustments to goals, strategies and tactics hoping for an evolutionary result.

The question needs to be asked whether more budget and people are needed or whether budgets and people need to be reallocated for the digital future. The models and strategies in place today at the majority of financial institutions are not going to generate the acquisition, share of wallet or loyalty goals that financial marketers say they aspire to.

Rather than an evolution of marketing plans, there needs to be a revolutionary reset of marketing and retail banking strategies before the marketplace finds alternatives that are more responsive and in alignment with their needs.

The 2016 State of Financial Marketing Report, sponsored by Deluxe, provides the most comprehensive guide of bank and credit union marketing trends and spending. The report is based on a survey of close to 300 financial services marketers and includes 62 pages of analysis and 40 charts.