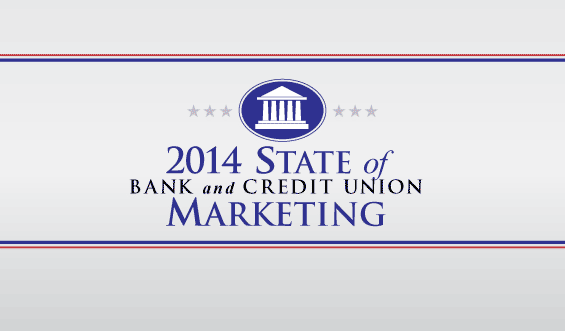 This annual comprehensive scan of the marketing landscape in retail banking reveals financial marketers’ strategies, priorities and challenges in 2014.

2014 marks the fourth year The Financial Brand has fielded its annual “State of Marketing in Retail Banking” study, and the second that research was conducted in partnership with Aité Senior Analyst Ron Shevlin.

Roughly 300 financial institutions from around the world took the annual marketing survey this year — 54% banks and 46% credit unions. Nearly 3 out of every 4 hailed from the United States, but we also saw responses from Canada (8%), Europe (7%), Australia (4%) among other countries.

Note: We’ve obscured some charts and tables. These are available only to survey respondents. Why? Because we need more participants in the study. Nearly 1 million people read The Financial Brand, and yet only 300 took this year’s survey — even though the data benefits everyone, and everyone wants to see it. In subsequent years, more and more of the survey’s results will be unreleased. The bottom line? If you don’t take the survey, you’re not going to see the results. But if you take the survey, you’ll get a robust report analyzing the data at a deeper level than what you see here in this article, including year-over-year trends and comparisons. 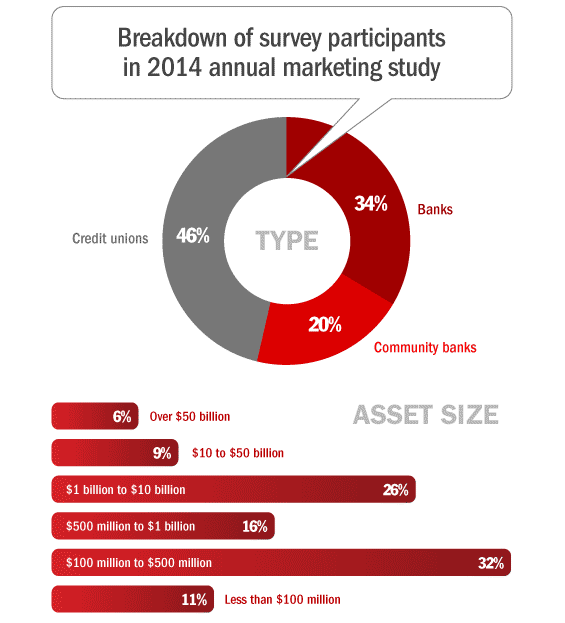 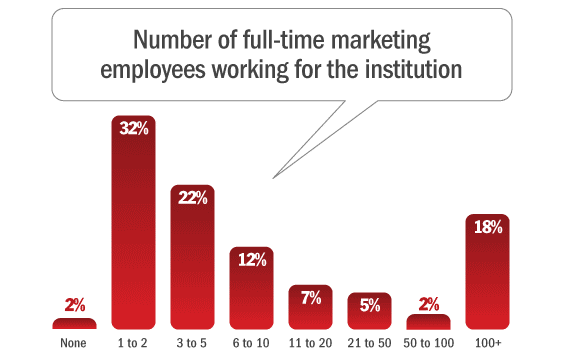 Every year, marketers say their #1 problem is insufficient budgets and/or manpower. No change there: 33.8% cited this as a “major challenge” in 2013, up ever so slightly to 34.0% this year.

In 2013, financial marketers ranked “regulatory and compliance” issues as their ninth biggest challenge. This year, it’s jumped straight up to #3, with nearly 50% more citing it as a “major challenge” than in the year prior.

Similarly, financial marketers are more concerned that their institution is taking on too many initiatives in 2014. They ranked this as their #7 most significant challenge in 2013, whereas this year it’s the #2 thing that’s troubling them most.

Generally speaking, financial marketers remain comfortable with managing social media and achieving brand clarity. Very few believe that the lack of consumer trust in the banking industry is a serious concern, and almost no one is worried about their rates and fees.

Marketing Budgets Are Increasing, But Not As Much As Last Year 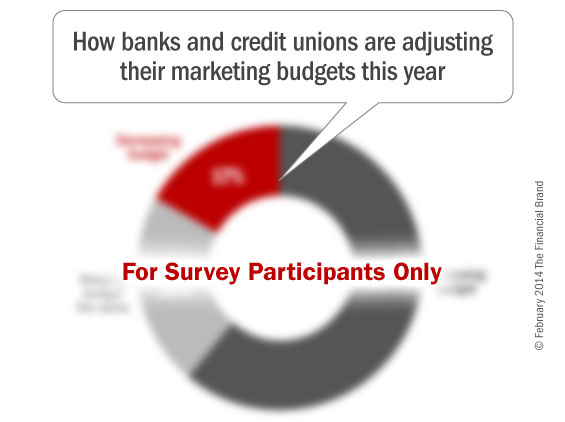 Survey participants were asked to rank their top three marketing priorities over the next 12-24 months. The data in the table signifies the number of respondents who ranked that priority either #1, #2 or #3 on their list. Two years ago, “loan growth” was #2 on the list, but it’s been in the top spot for the last two years. In 2013, no one wanted deposits; this year, everyone wants them. Last year, only 3.1% of financial institutions said their top priority was “expanding/growing new markets,” but that number shot up significantly in 2014, with one in five institution’s ranking now it #1. At the bottom of the list? Reducing customer attrition. 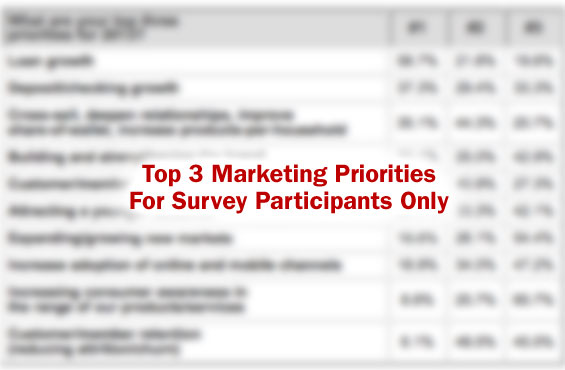 Most Critical Products & Services to Promote in 2014

Even though financial marketers cite “loan growth” as their most important strategic goal this year, they rank “mobile banking solutions” as the most critical thing to push (69% in 2014 vs. 63% in 2013).

Comparing 2014 to last year, auto loans fell two spots in the list, as did credit cards. Fee-based checking accounts, savings accounts and term deposits all rose a couple spots over their 2013 rankings.

For the second year in a row, prepaid cards came in dead last, and PFM is still not a priority for most institutions.

Most of the survey’s participants have modest branch networks. Half have ten or fewer. But many plan on opening more branches in the future. None of the respondents said they would be “closing many branches” in 2014. 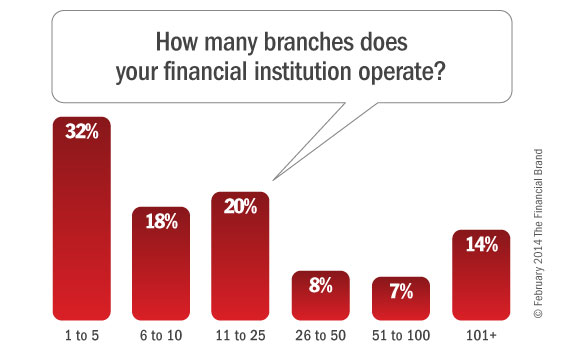 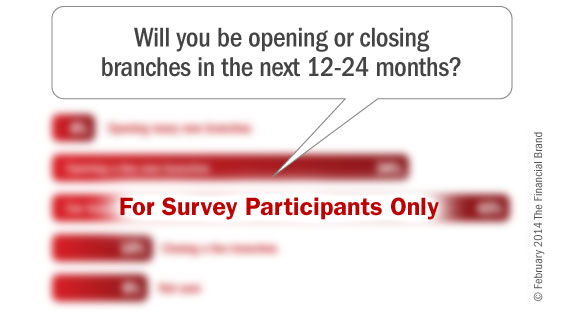 Nearly all financial institutions use deposit growth and loan volume to gauge the effectiveness of their marketing efforts, although a surprising 7% admit they don’t use that metric. Nearly 9 out of 10 respondents said they monitor growth in their customers (or members). The third most-common metric bank and credit union marketers look at is depth of relationship” (products or services per consumer/household).

Very few financial institutions use third-party studies and ranking systems like JD Power, which is understandable because such systems usually only rate the Big Boys.

Fewer than half of all financial marketers use Net Promoter Scores, conduct internal brand audits/assessments, or monitor their PR efforts (assuming they conduct any public relations activities at all). 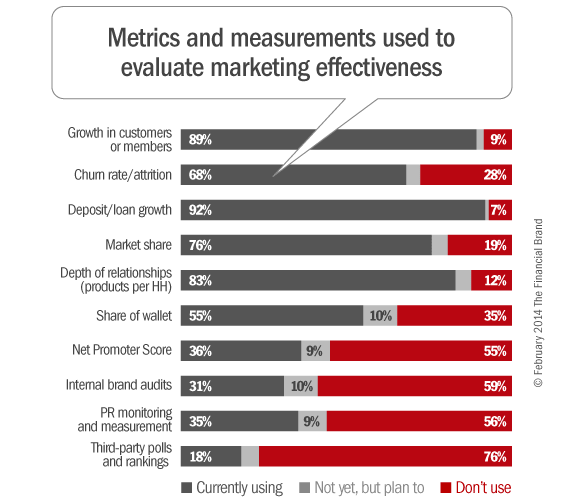 Financial marketers see billboards and outdoor advertising as the most useless media channel — 27.3% say it is not an important part of their marketing mix.

Guerilla marketing, database/MCIF marketing and the application of a CRM system have the most financial marketers scratching their heads in 2014. 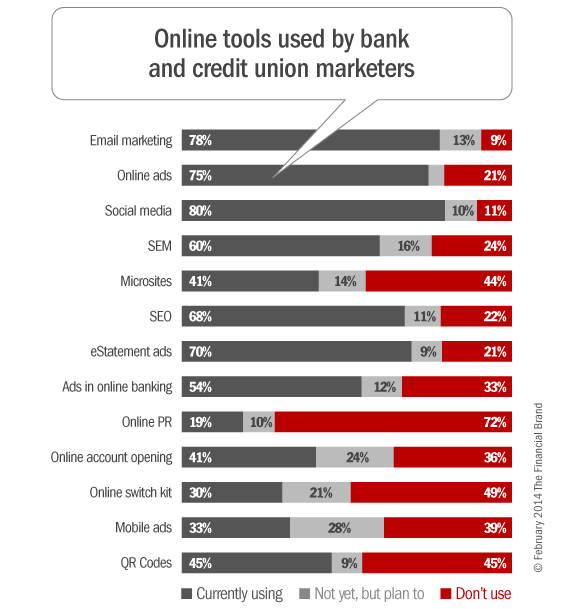 The overwhelming majority of financial institutions now have a presence on Facebook. More than half use Twitter and Facebook, and roughly two-thirds are using LinkedIn. A quarter of all respondents say they maintain a blog, and an equal number claim to be using Google+. Less than one in 10 are using Pinterest and Foursquare. 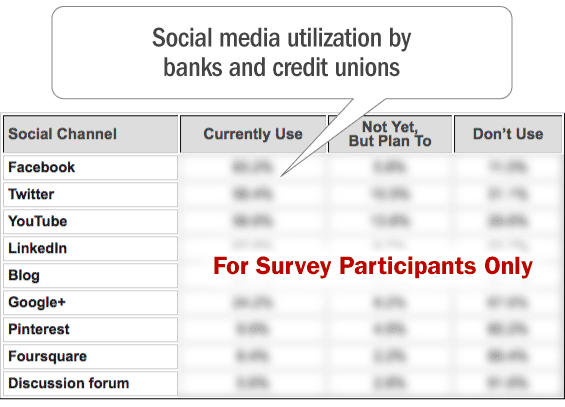 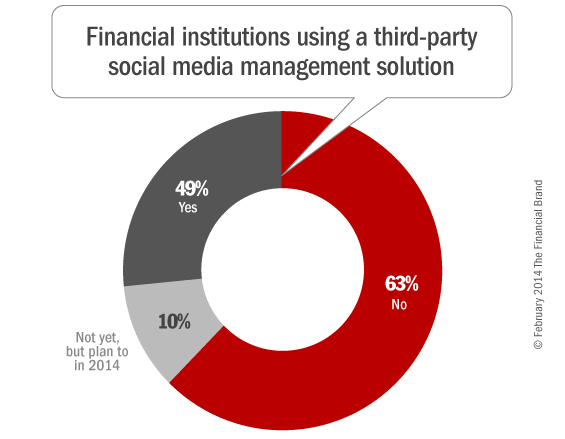