The number one challenge facing financial marketers in the next 12-18 months?

According to The Financial Brand’s 2012 Bank & Credit Union Marketing Survey, bank and credit union executives say their organization’s lack of marketing investment is what holds them back, this despite the fact that nearly half saw their budgets increase in 2012. They also feel that their I.T. systems are limiting, that it’s difficult to get employee support for marketing initiatives, and (of course) there’s always a boatload of compliance headaches.

If financial marketers seem cranky, maybe they have good reason to be. The turbulence of 2011 strained both banks and credit unions alike, and it doesn’t look like 2012 is shaping up to be much easier. Indeed, marketing executives at banks and credit unions have their work cut out for them this year. They say their number one priority is to increase their financial institution’s lending portfolio. How? By cross-selling mortgages, auto loans and credit cards to existing customers. But the lending market — everything about the entire economy — isn’t cooperating. There aren’t many consumers brave enough to apply for credit in this rotten economy, and only a handful meet lenders’ new, stricter requirements.

You can review the full results of The Financial Brand’s study in detail below. There is also a companion piece to this article,“What’s The Single Biggest Financial Marketing Issue In 2012?“ highlighting answers to the survey’s only open-ended question.

Special thanks go out to all those who participated in the survey. These folks appreciate the value of collective insight — that you can learn a lot by contributing a little. The Financial Brand also extends a big thank you Jim Marous, Senior Marketing Director with Harland Clarke and publisher of Bank Marketing Strategy, for his logistical and marketing support that contributed so much to the success of this survey. You can read Jim’s take on the survey here at his blog. Thanks go out to the good people at ACTON Marketing as well, who helped recruit survey participants.

The survey was completed by 228 total participants, including 84 banks, 30 community banks and 104 credit unions. 82% of respondents worked in a marketing capacity. Financial institutions in all asset classes were well-represented — 15 responses came from those with over $100 billion in assets, while 57 responses came from those with less than $100 million in assets.

Many of the challenges facing financial marketing executives involve other departments, particularly  I.T., sales/operations and HR. In order for bank and credit union marketers to succeed, they need forge closer ties with these departments in 2012 and beyond. An isolated marketing department can only achieve so much. 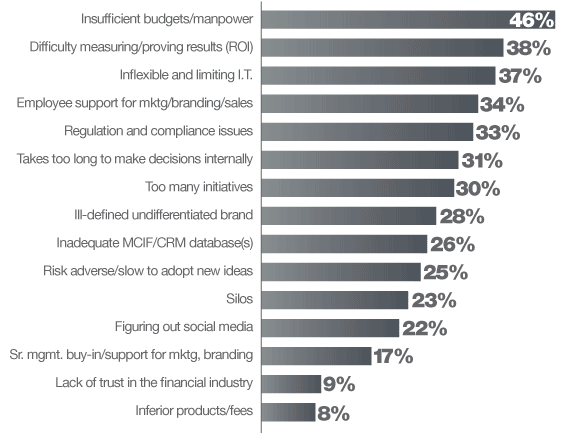 It is simply stunning that only 9% of financial marketers see consumers’ lack of trust in the banking industry as a significant marketing challenge in 2012. (Try telling that to BofA.)

Reality Check: For consumers, their economic meltdown is far from over and banks are still to blame.

Changes to Marketing Budget in 2012

For this question, respondents were asked to rank their top three marketing priorities over the next 12-24 months. The data in the table signifies the number of respondents who ranked that priority either a #1, #2 or #3 on their list. The majority of financial institutions see cross-selling and loan growth as critical to their success in 2012.

If banks and credit unions want to deepen relationships, you’d think they see value in retaining those relationship, but they paradoxically put “customer/member retention” at the bottom of their priorities.

Reality Check: It may be easier to sell to an existing customer than to find a new one, but you can’t cross-sell customers/members (#1 in the list) that you don’t retain (#10).

In the survey, this question presented respondents with a randomized list of financial products and services, asking them to check those that their bank/credit union will concentrate on promoting most heavily in the next 12-24 months. Not surprisingly, lending products such as home loans, auto loans and credit cards top the list.

Despite many predictions declaring that traditional media is dead, roughly half of all bank and credit union marketers assert that print, TV, radio and outdoor advertising will have about the same importance in 2012 as it did last year. However, financial marketers also say that online advertising, social media and PFM tools will be growing in importance over the next 12 months. This data suggests that future of bank and credit union marketing will shift to the internet, but old habits die hard. It’s also worth noting the increase in significance of data-driven initiatives such as onboarding, database/matrix marketing, CRM systems and direct mail.

Roughly two-thirds of banks and credit unions utilize the services of an outside ad agency or design firm. A similar number turn to web developers for their online needs, while nearly 3-in-4 use a production company for their TV and radio spots. Only about a quarter of financial institutions utilize a third-party vendor to help them in areas like public relations, social media and financial education. 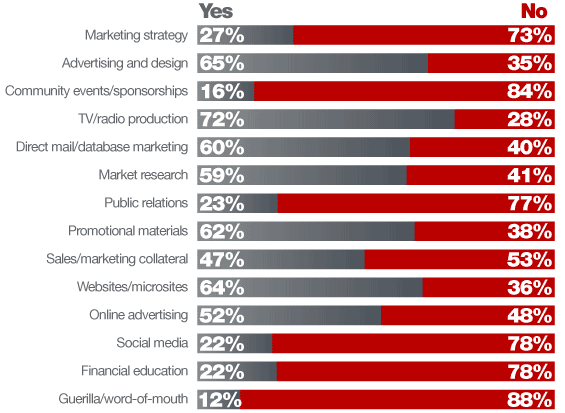 Anyone who works in management — especially those in marketing — knows how hard it can be to correlate advertising and branding with results. When you look at the tools financial marketers are using in 2012 to assess and measure the success of their efforts, you see the usual suspects, mostly metrics that gauge the overall health and performance of a financial institution. But what’s startling is the number of bank and credit union marketers that don’t look at these things. Nearly a third (28%) don’t view marketing activities through the lens of customer acquisition. One in three don’t incorporate customer feedback. Three in five don’t factor attrition/churn rates. 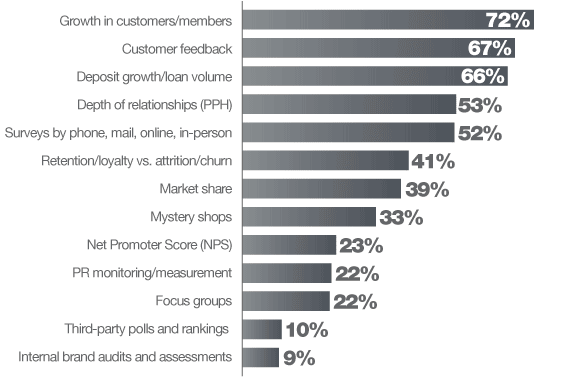 Changes in Size of Branch Network

Pundits have been predicting the demise of branches since the mid 90s, but (for now) banks and credit unions seem reluctant to accept this. Rather than close branches, 42% say they are planning to open more locations in 2012, while nearly half say the size of their branch network will not shrink and at least stay the same. Only 6% of financial institutions say they intend to close any branches in 2012. 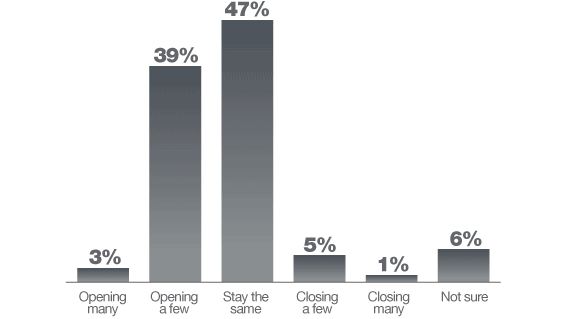 When The Financial Brand conducted a similar study back in 2010, only 69% of banks and credit unions said they utilized email, but that number increased 10% in 2012. Similarly, 68% say they now pay for online banner ads vs. only 54% who said they did so in 2010 — an increase of 14 percentage points. Those pursuing an SEO strategy grew by 13 percentage points. But it was ads in eStatements that saw the most growth, moving from 44% in 2010 to 63% in 2012 (up 19 points). Fewer financial institutions say they are using microsites in 2012 (52% vs. 38%), signalling a significant slowdown in this once-popular internet marketing approach.

Two in five financial institutions either have a blog today or plan to soon. Three in four use Facebook, making it the dominant social channel for banks and credit unions. Just about half are using the other three major social platforms: Twitter (54%), YouTube (49%) and Linkedn (48%).

When asked how many staff hours are applied to social media every week, a staggering 40% of banks and credit unions say only 1-5 hours. And financial institutions wonder why they don’t get more out of it? There is practically nothing in marketing worth doing that only takes 1-5 hours per week — and that’s especially true with social media. You’re going to get out of it what you put into it. Little investment = little/no return. 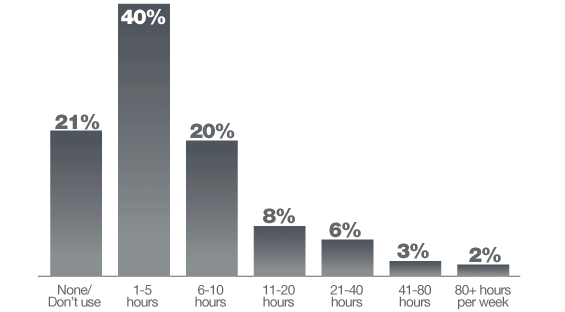 The Financial Brand looks at hundreds upon hundreds of bank and credit union websites. Based on what we see, it’s hard to believe that nearly one in three financial institutions have undertaken a major redesign in the last year, or that two-thirds of banking websites have been refreshed within the last 2-3 years. There are still many websites in the financial industry that look dated (e.g., more than five years old).

Do You Have Formal Brand Guidelines?

When asked if their financial institution currently has a formal, written set of brand guidelines, 53% said yes, although it’s likely that many of these respondents have only a set of graphic design standards rather than a broader brand manual applicable to all employees. One in five financial institutions don’t have brand guidelines of any kind, but an equal number intend to.