Subscribe Now Get The Financial Brand's FREE Email Newsletter
They say a picture is worth a thousand words, but for WestStar Credit Union, photos of smiles could be worth thousands of dollars in free publicity.

Thanks to the folks at WestStar Credit Union, a simple smile will go a long way. The credit union’s “Mile of Smiles” campaign aims to donate $1 to a local charity for every smile they collect.

Members of the community are being asked to send in pictures of friends, family and themselves smiling. The photos will be posted on a custom microsite WestStar created for the promotion, forming what will become a mile of smiles.

WestStar estimates the average smile is about four inches long, and there are 63,360 inches in a mile. That means WestStar needs 15,840 smiles to reach “A Mile of Smiles.”

If that goal is reached, nearly $16,000 would be donated to Opportunity Village, a Las-Vegas based not-for-profit organization helping people with intellectual and related disabilities.

The campaign kicked off August 15, and within two weeks the credit union had already collected more than 2,200 smiles. WestStar says the campaign has no scheduled end-date, and intends to keep it going until the entire $15,840 has been donated.

WestStar, a credit union serving employees in the gaming industry throughout Nevada, says the inspiration for “A Mile of Smiles” came from one of its longtime members. The member, who was terminally ill, wrote a letter to the credit union praising the service they received, and thanked them for the smile that constantly appeared on his favorite teller’s face.

“The ‘Mile of Smiles’ concept came about from a member who shared his philosophy on the importance of smiling,” said Rick Schmidt, President/CEO of WestStar Credit Union. “He said a simple smile can make someone’s day, especially when we don’t know how many days we may have left.”

“He reminded us that a simple smile is a great way to stay positive and focused despite challenging times,” he further explained.

At that point, WestStar turned to agency partner Simon + Associates Advertising, who developed the “Mile of Smiles” program for the credit union. 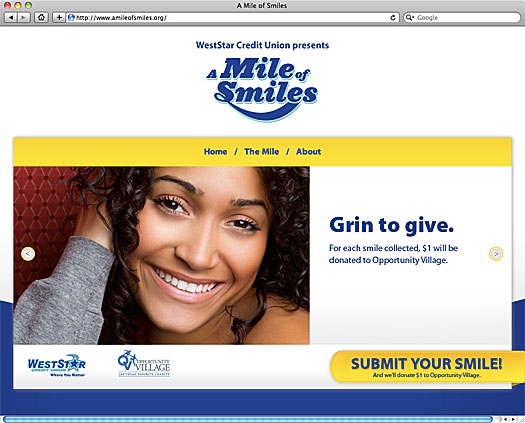 There isn’t a whole lot to this microsite WestStar put together, but that’s okay. it’s nice and simple. The nav includes a home page, a gallery of photos, an info page and a link to a page about the credit union.

There are two ways people can submit their photos. They can send an email to [email protected], or use the submission page at the “Mile of Smiles” microsite. WestStar isn’t too picky about the kind of photos it receives — basically just pictures of people smiling in Las Vegas and Reno. 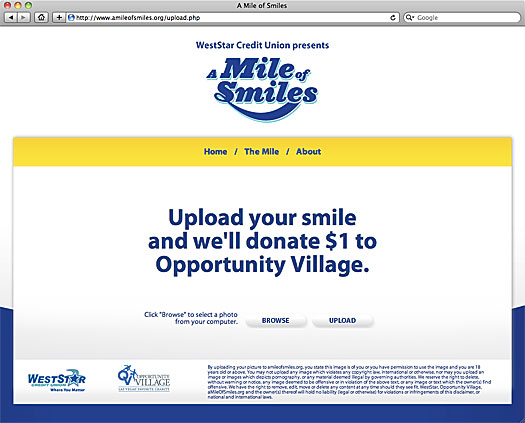 The online submission process is unbelievably simple. You click the “Browse” button to find the photo on your computer, then the “Submit” button. That’s it. No form to fill out, no worrying about follow-up marketing calls or junk mail.

All photos submitted are held in moderation before being added to the gallery on the “Mile of Smiles” microsite — a wise decision.

It would be nice if WestStar could alert users once their photo has been approved and added to the gallery. This would increase user-engagement (people like looking at pictures of themselves online) and word-of-mouth referrals (“Hey Mary, see this photo of us at Mardi Gras last year? Why don’t you send in a photo too? It’s for a good cause!”). Of course, this step would require WestStar to harvest email addresses, but it would probably be worth the extra effort just so the credit union could send a “refer a friend” follow-up message.

WestStar put together a gallery with about 200 photos of smiling people on its microsite, many of employees. With the primitive presentation, slow load time and tricky interface, there’s a lot of room for improvement here. (Note: WestStar doesn’t promise that any photo submitted will be added to this gallery. In fact, the entire gallery could have been built before the promotion began, and might not be updated at all.) 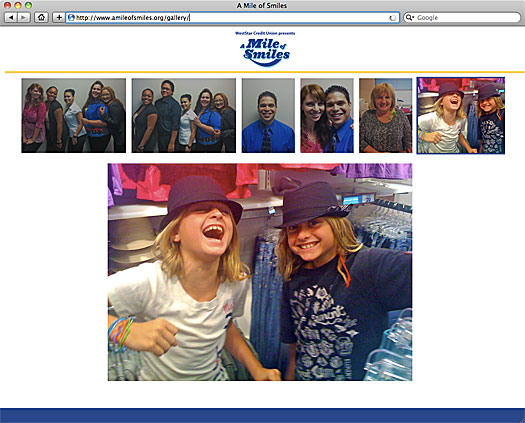 Each of these pictures represents a $1 donation made by WestStar to Opportunity Village and another step towards the credit union goal of “A Mile of Smiles.”

It could be tough for WestStar to hit its goal of “A Mile of Smiles.” Let’s assume a 2% response rate (and that’s probably generous). That means that the credit union needs to get its “Miles of Smiles” promotion in front of 792,000 people — that’s 30% of the entire population of Nevada. There are only 589,317 people in Las Vegas. To reach 15,840 smiles is an ambitious goal for a credit union with only 22,826 members and $137 million in assets. Vegas is a tough media market — you’re competing with deep-pocketed casinos — and ads don’t come cheap.

Does WestStar have the resources to reach the audience necessary to hit their target? Perhaps. But it will take all the marketing muscle they can muster… and then some. Plus a little luck. The bottom line is that to achieve the kind of numbers WestStar is shooting for, it will take a full court press.

WestStar is pushing “Mile of Smiles” with a banner ad on their website homepage. They’ve also got some coverage from local Las Vegas TV stations, and a couple article in local papers. They’ve made a modest effort at their Facebook page, where the credit union has just over 200 ‘Likes.’ WestStar is sending “brand ambassadors” out into their communities encouraging participation, and WestStar staff will be at various events with a booth set up to take on-the-spot photos. 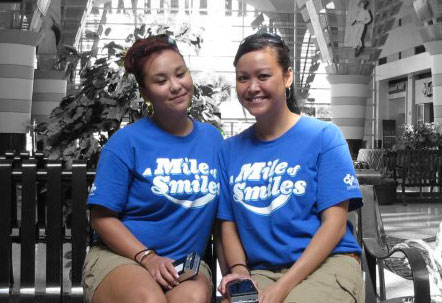 To promote the charity drive, WestStar made “Mile of Smile” t-shirts for staff.

Analysis: What Makes This Noteworthy

There are quite a few things that make WestStar Credit Union’s “Mile of Smiles” stand out. First, it is one of the very few examples of social media in the financial industry that doesn’t hinge on a major social network like Twitter or Facebook. WestStar hosts the entire promotion on its own microsite (a rarity itself these days). They aren’t trying to build ‘Likes‘ by requiring people to send submissions through Facebook; indeed there isn’t much about this promotion that’s self-serving at all, which is a bit refreshing for a social media charity drive.

It’s also nice to see a social media promotion built on photos — not videos, votes or ‘Likes.’ Videos are too hard for most people to produce. Votes are easy to rig. And ‘Likes’ are what everyone else uses, so it’s undifferentiated. Moreover, it isn’t just that “Mile of Smiles” centers around photos, it’s the kind of photos WestStar is asking for: everyday snaps of people’s smiles. Anyone can find/take a picture of someone smiling. That makes “Mile of Smiles” accessible to pretty much everyone, which isn’t always the case when a promotion seeks user-generated content. It just feels better for consumers too, who are more likely to think donating a “smile” is less commercially smarmy than hitting the ‘Like’ button or having to surrender contact info.

WestStar says it’s going to keep the “Mile of Smiles” promotion going until it reaches its goal. This is an unusual commitment, particularly considering how difficult it could be to hit 15,840 submissions. But nothing prevents WestStar from simply announcing that the promotion has ended. They can cut a check for $15,840 to Opportunity Village any time they want, whether they actually reach the full “mile” of smiles or not.

In that light, perhaps WestStar’s “Mile of Smiles” promotion is just a clever way to get the most mileage out of a charitable donation? Maybe the credit union decided it wanted to give $16,000 to a charity, but wanted more media coverage than the typical dull press release affords. So why not create a promotion that helps draw attention to WestStar’s donation?

Instead of looking at “Mile of Smiles” as a charitable campaign, it may be more appropriate to view it as a savvy PR campaign. Think about it. WestStar got coverage on every local TV station and articles in at least two Las Vegas papers for an out-of-pocket cost around $20,000. They get their name out there, while news outlets tell everyone how generous the credit union is.

Ask any financial marketer if they’d like to have every media outlet in their local area pump out positive press about their organization, and they’ll jump at the chance — especially when all it takes is a microsite and a modest investment.